CLAT 2016 was conducted on May 8, 2016, as per its test pattern. According to the students reaction and expert inputs, the test was of easy to moderate difficulty level. Among the 5 sections, Elementary Mathematics or the Numerical Ability section had the lowest weightage but it had tricky questions which, examinees said, consumed substantial amount of test time. As per Harsh Gagrani, expert, LegalEdge Tutorials said, “By far, this is the easiest CLAT exam I have come across. This would definitely lead to an increase in cutoff marks.” 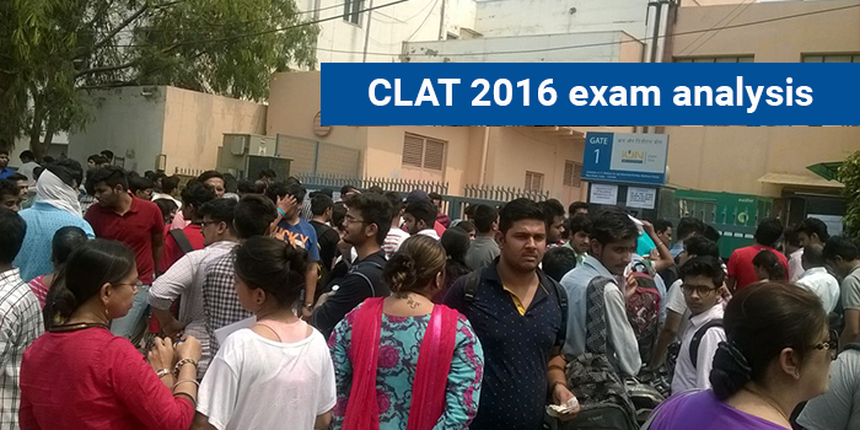 The test takers rated the other sections, English Comprehension, General Knowledge & Current Affairs, Legal Aptitude and Logical Reasoning as easy. Megha, a CLAT 2016 test-taker, shared, “I found the paper to be easy except the Maths section as most of the questions were tricky and also required intense calculation. On the other hand, GK and English sections were easy.”

Before a detailed section-wise analysis, let us take a look at the overall exam pattern of CLAT 2016.

CLAT subject-wise distribution of questions
Create your own infographics

Now let us take a look at section-wise analysis of the exam based on expert inputs.

This section had 1 Reading Comprehension passage and the rest of the questions were on English Usage. The topics of the questions were Grammar (Proposition, Verb, Adjective, Adverb), Fill in the blanks, Idioms & Phrases, and Spellings. Naman Dubey, who appeared for CLAT 2016 from one of the test-centres of Delhi-NCR says, "English was the easiest of all sections. I think that a Class 10th student could have easily answered the questions without any difficulty."

As mentioned before, this was the toughest and trickiest section of the exam paper. As per Gagrani, the questions were more Logic based, which were doable. The questions were from various topics including Arithmetic, including Percentage, Ratio & Proportion, Algebra, Geometry, Probability amongst others. Rajendra Khadav of CrackCLAT Tutorials said, “Most of the questions were calculation intensive, hence the candidates needed to spend time on solving questions from this section. Ideally, test takers should have left the tricky questions to escape the negative marking scheme.” Rajneesh Singh, CLAT mentor believed that Mathematics will be the deciding factor. “Those who could not maintain accuracy would have lesser chances to crack the exam,” he said.

According to the experts, the top participating colleges’ cutoff would be above 140. Gagrani says, “The cutoff for the top 3 colleges would be from 140 to 145. On the other hand, Rajendra Khadav expected the cutoff scores to range from 145 to 148.

Stay tuned to law.careers360.com for more news and updates on CLAT 2016.