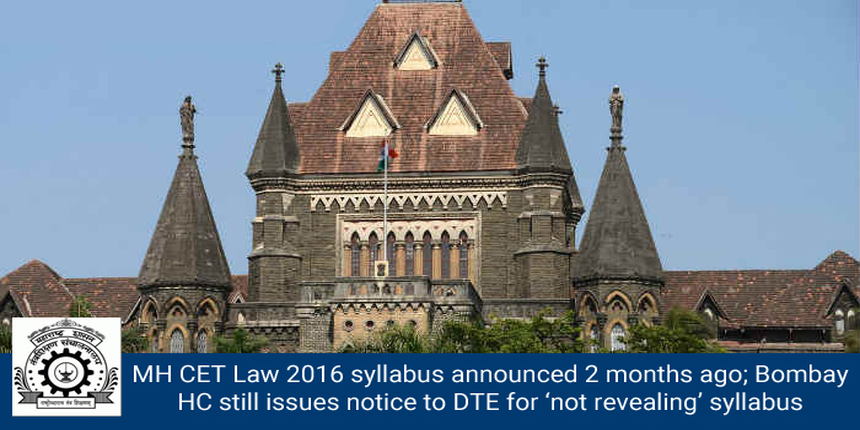 Bombay High Court has issued a notice to Directorate of Technical Education (DTE) Maharashtra for ‘not revealing’ syllabus. However, an official notification detailing MHCET Law 2016 syllabus is being displayed on the DTE website for last 2 months now.

The Bombay HC has asked DTE Maharashtra to respond by June 7, 2016, scheduled date for next hearing. A common entrance test, MH CET Law 2016 is being conducted, in as first, for admissions to 3-year and 5-year integrated undergraduate law programmes on June 18 and 19, 2016, respectively. Check here for important dates of MH CET Law 2016.

A writ petition was filed by a law aspirant who claimed that the examination authority, DTE has not released the syllabus and paper pattern of the law entrance test which was, however, announced in March 2016. The Writ Petition was filed on May 9, 2016, in the Aurangabad Bench of Bombay High Court. The petitioner also claimed that aspirants of MH CET Law 2016 had to rely on information provided by law.careers360.com, which can’t be treated as the official version.

A scrutiny to the DTE website, however, still shows entrance exam syllabus and paper pattern on its notice page.

According to the official notification published two months ago by the DTE, MHCET Law 2016 will be conducted in English and Marathi language. The question paper will comprise 150 questions carrying one mark each. As per the official document, duration of the offline test will be 2 hours.

MH CET Law is the state level law entrance exam conducted by DTE Maharashtra for admissions to undergraduate law programmes including 3-year and 5-year integrated LLB in the government law colleges of the state.

I am a candidate who is born in maharashtra and have domicile certificate. My query is what to put in candidature type in the mhcet law (5year2020) form?

since you have born in maharastra and also you have the docile certificate of maharastra, you fall in type A category of candidate. so you can enter type a category in mhtcet law application form.

In order to know what type of questions come in MH CET LAw, go through the sample paper given below, it'll help you be acquainted with exam pattern, topics and all other relevant details-

You can prefer for MH CET law preparation given below:

Go through with the previous year papers and do practice as much you can it will be very helpful for the exam.

Hi aspirant,
The rank cutoff for MHCET exam for 5 year course at ILS Law college is 58 for OBC category. And closing rank in previousbyear was around 1414,so if your rank is above this in rank list that college will give out you may secure a seat in this college.

You may follow the following link for more details-
https://www.google.com/amp/s/law.careers360.com/articles/mh-cet-law-cut-off/amp

I cleared MHCet Law 3 years in 2017 and I took admission in provided college but as Im working in Indian Army and posted in assam, I didnt appear for exam, my admission got cancelled due to failure, so can I again appear for MHCet law and continue my LLB studies.

Yes you can again give the exam and start your law studies. You have to start it from the starting, you will not get any privelage of being the student of the same course. It's okay.

It's never too late to start, so go ahead with your passion, all the best.

View All Questions
Have a question related to MAH-LL.B (5 years) CET ?

All About MH CET Law

Your MAH AAC CET brochure has been successfully mailed to your registered email id .