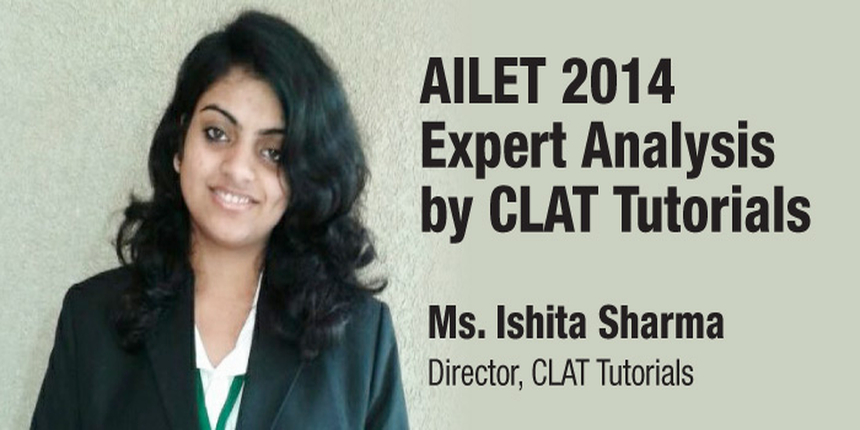 AILET 2014 Analysis by CLAT Tutorials -
The All India Law Entrance Test (AILET) conducted every year by National Law University, Delhi for admission to B.A LL.B (Hons.) programme was held on May 4 across various centres in India.

Below is the excerpt of the interview –

This year’s AILET paper was made strategically so as to test real logic of the students rather than acquired by practice. English section turned out to be partially easy and partially difficult as some students got stuck with the tricky vocabulary questions while others found reading comprehension to be unconventional which took time to be  understood. Para-jumbles asked in the entrance were of complex nature. This section was not so difficult but the Reading Comprehension was lengthy which increased the difficulty level.

General Knowledge was the section which helped students score substantive marks as this section was rated as a “cake walk” by most of the students. Questions like “Who is the founder of facebook?” were asked in the G.K section which shows that the difficulty level was not much. One weird thing observed in this year’s AILET examination’s G.K section is that most of the questions asked were based on current affairs. Only 6-7 static G.K questions related to science and history were asked, unlike past years where the G.K section was broadly divided into two categories where static G.K and Current Affairs questions were asked in near equal proportions. Those students who were serious about this section throughout the year could easily score at least 25.

Legal Aptitude was another easy section where only basic questions were asked for reasoning and very few legal knowledge questions (around 5) came to be noticed. It had few questions which seemed to have two correct options and it became difficult to deduce which one was correct.

Ayush Jain an aspirant from Kolkata was found quoting that “I made the mistake of my life by starting off with maths and moving on to logic next... GK is never my cup of tea so an easy GK section actually went against me... Bad choice of leaving an easy legal for the end... English was not easy, pretty good standard I would say. Learnt a lesson for CLAT.”

This section was opposite to what was expected but still was another sigh of relief for all the students. The much hyped difficulty of AILET 2014 was also tamed because of this.

According to Shreyansh Goyal whose centre was CNLU, Patna- “English was easy. Logical and Legal reasoning were both lengthy and time killing. GK was comparatively easy. Time ran out for everyone. I didn't even get to read a single question from Maths. But I managed to attempt around 132 questions.”

Maths was slightly inclined towards the easy side and did not cause much inconvenience to those who attempted it genuinely. An average score in this section would be 5 or 6.

According to Trisha Biswas who appeared for the exam at Bharitya Vidya Bhavan, Kolkata, said, "I first started with the GK which was pretty easy. Legal was lengthy and took up a lot of time. In a few questions, it was tough to deduce the right option as two of them were very closely related to the principle. Next I moved on to the logic section and I have to admit that it was not very easy and even this section consumed a hell lot of time. English was fairly easy though lengthy again. Time management was the biggest issue. I couldn’t even touch the maths section which is regretful but yet I'm glad I didn't go for it as maths is not my cup of tea. Over all I probably attempted 120 questions. I am hoping for the best. The cut off marks should be around 100.”

There were some legal G.K questions as well in the legal section but they were easy ones with respect to number of high courts, jasmine revolution, bit coins which were fairly simple. Some legal principle based questions were very tricky and had almost two similar options making it difficult to choose. Overall, legal section was moderate.

Careers360: What is your overall take on the paper?
Ishita Sharma: Overall the paper could be called moderate and lengthy. Scarcity of time was a major issue for all the students. Not many could attempt all 150 questions. Average genuine attempts went upto 135 questions and the remaining were to be guessed. With General Knowledge and Maths to be easiest, English and Legal Aptitude to be moderate and Logical Reasoning to be most difficult.

Careers360: What would be the cutoff for AILET 2014?
Ishita Sharma: A cutoff between 98 and 102 can be validly predicted.

You can also check the answer key of the AILET 2014, once it is available. The result for AILET 2014 is scheduled to be out on May 24, 2014. Those who will qualify the law entrance exam and meet the cutoff can expect to be admitted to National Law University, Delhi.

Stay tuned to law.careers360.com for more news and feature articles on AILET 2014 Exam.