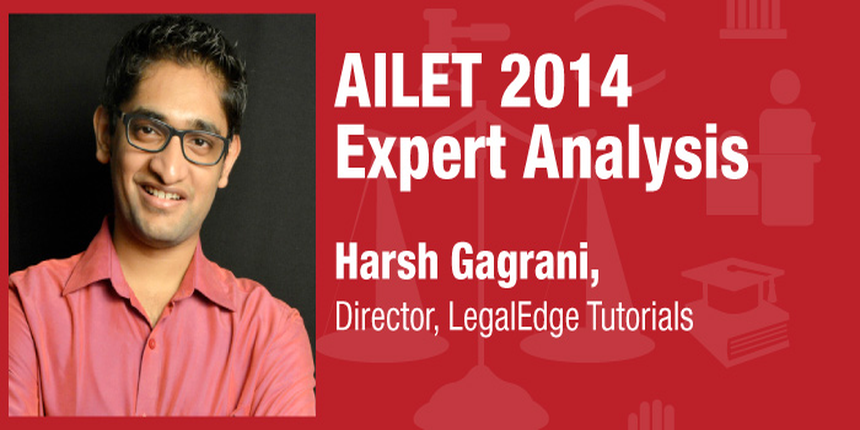 The All India Law Entrance Test, AILET 2014 was conducted by National Law University, Delhi on May 4, 2014. It is the law entrance test for admissions to the undergraduate law programs offered by the university. AILET 2014 was held across various exam centres in India.

Below is the section-wise analysis of the paper –

Harsh Gagrani: According to me, the overall AILET 2014 was easy but lengthy. Some of the sections were unpredictable but most of them were quite predictable. Those who have taken the mock tests and practiced from the last year question papers would have done remarkably well.

English: The English paper was quite predictable and easy. Candidates can expect a good score in this section. The questions comprised questions like fill in the blanks, correct usage of the word, etc.

Logical Reasoning: This paper was easy. There were three prominent topics in this section, State of Assumptions, Course of Action and Puzzles. One question out of the seven that came in puzzles was a bit confusing. This section could be said a moderate one.

Legal Reasoning: This portion was an unpredictable one.  One reason being not much of its portion is being taught at the school level and the other was that every year nearly 20-22 questions come from legal reasoning and assumption portion but this year NLU, Delhi gave 30 questions from this portion and only 5 questions from legal knowledge. Candidates would have attempted some fewer questions as compare to the rest section.

Careers360: Where there any anomalies in the paper?

Harsh Gagrani: Yes. The questions from legal reasoning were quite lengthy and candidates would have wasted their time in these questions. The overall paper was lengthy than the last year questions.

Careers360: What according to you is the expected cutoff for AILET 2014?

Harsh Gagrani: I expect that the AILET 2014 cutoff for the General category could go 98-100 for the 70 seats in BA LLB programme in NLU, Delhi.

The total number of seats for B.A., LL.B (Hons.) Degree Programme is 80. Out of the eighty seats, ten seats are for Foreign Nationals.

You can check the answer key of the AILET 2014, once it is available. The result for AILET 2014 is expected to be out on May 24, 2014. Those who will qualify the law entrance exam and meet the cutoff can expect to be admitted to National Law University, Delhi.

Stay tuned to law.careers360.com for more news and feature articles on AILET 2014 Exam.