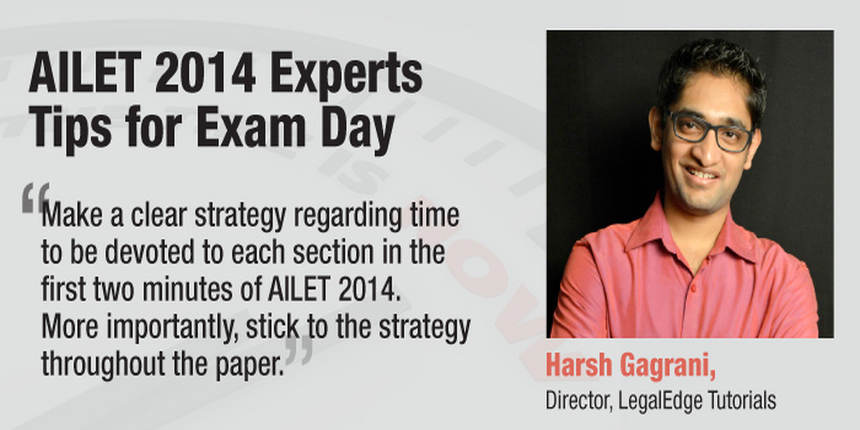 With only four days left for AILET 2014, law aspirants are gearing up for what is considered the second most important exam in India after CLAT. Administered by NLU, Delhi, AILET 2014 is scheduled to be held on May 4.

More than 14000 candidates have registered for AILET this year. Out of 80 seats for the B.A. LL.B (Hons.) degree programme, test takers in India will be competing for 70 seats (10 seats are reserved for foreign nationals).

In an effort to guide the aspirants with their last minute preparation for AILET 2014, Careers360 brings you AILET 2014 Expert Tips for Exam Day with section- wise preparation strategy for the law entrance test.

Here we have Harsh Gagrani, Director, LegalEdge Tutorials sharing the last-minute expert tips for AILET 2014, which will help in smoothening the rough edges of your law entrance preparation.

Below are the excerpts of the interview –

Harsh Gagrani: Here is how you can tackle the sections of AILET 2014 while taking the entrance –

English – Though questions from various topics have been appearing in AILET, the Reading Comprehension passages in the previous years’ papers have been long and slightly difficult to comprehend. I would recommend practicing Reading Comprehension passages, especially, from previous years’ CAT and GMAT papers. Hence, it would help to practice Cloze passages for AILET 2014.

Legal Reasoning- Though Legal Knowledge questions have not been featured regularly in AILET papers, it would be wise to be well-prepared with this section, especially. Since single marks are known to have created big differences in AILET selection procedures. Moreover, it is advisable to go through the important articles on the Indian Constitution, be updated with important facts about Indian polity (especially about houses and assemblies) and so on.
NLU, Delhi has also, on more than one occasion, given Legal Reasoning questions without principle(s). Aspirants should practice such questions from past years’ papers of AILET.

General Knowledge (GK) – The difficulty level of General Knowledge questions in AILET has usually been a notch above CLAT and SET papers. Many questions have regularly appeared from general science and history in GK. You can update these sections by reading a good current affairs and GK guide.

Mathematics – In the light of previous years’ AILET papers, the Mathematics section does not have any highlighting facts for preparation. Questions have appeared from almost all major topics in AILET in the past few years. Candidates should make sure that they are thorough with all the relevant formulas from important chapters.

Harsh Gagrani: The last few hours of preparation will require hard and importantly, smart work on any serious aspirant’s end. You should prioritize and complete the topics, which have appeared frequently in previous years’ AILET examinations.

Careers360: Share some of your last minute tips with the AILET 2014 aspirants.

Harsh Gagrani: Besides the above, here are some last minute essentials to guide the AILET 2014 aspirants –

Stay tuned to law.careers360.com for more news and feature articles on AILET Exam