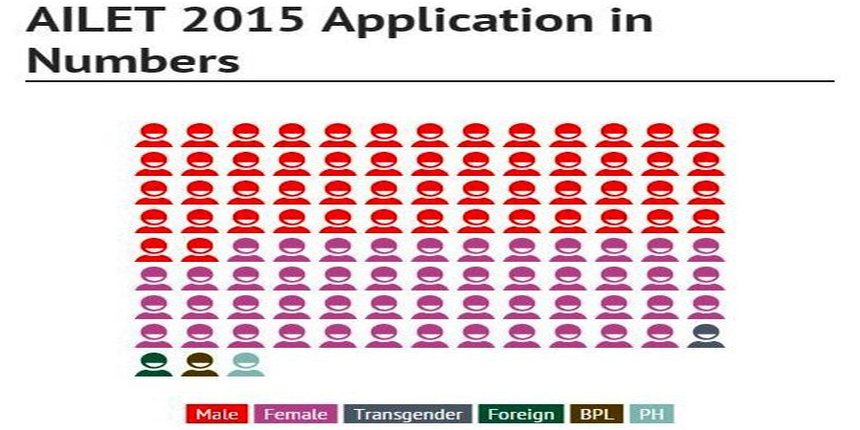 AILET 2015 Application
window closed on April 11. This year, as many as 16215 applicants have registered for AILET 2015. AILET 2015 Convener, Dr. J.S. Bajpai has shared the information exclusively with Careers360. This article brings to you insights on AILET 2015 Numbers.

AILET 2015 Application in Numbers provides you a brief overview of the number of applications category-wise including Male, Female, Foreign, BPL and PH candidates. The Convener has also shared the number of transgender applicants who have registered for AILET 2015, which shows that not only IIMs including IIM Ahmedabad and IIM Indore but also law schools like NLU Delhi are accepting applications from transgenders thus providing education to one and all.

Below is the pictogram for a better knowledge of AILET 2015 Applications stats.

Last year the number of AILET applications was around 14000 which have significantly risen to 16215. AILET 2015 Convener said that the increase in numbers show that the candidates are choosing law programmes. Dr. G.S. Bajpai says, “National Law University, Delhi has lot of things to offer to a law aspirant, as it is one of the best networked institutions catering to almost all fields of teaching and practice with a capacity to shape the future of aspirant.”

Pointing NLU Delhi as one of the foremost choices of law aspirants, the Convener says, “National Law University Delhi has earned in recent past on account of its substantial contribution to Research, Faculty Improvements and Facility Development. National Law University, Delhi has perhaps the best set of people as faculty, having micro specialization in several upcoming fields of legal studies.”

He also adds, “National Law University Delhi is now the most sought after Law School in the country as it has evolved as a specialized teaching and research institution having a good number of collaboration with world’s best law schools.”

The pictogram above shows the Number of AILET 2015 Applications for each category including Male, Female and Transgender.

AILET 2015 is the second most sought after law entrance exam for admissions to 80 seats in NLU Delhi for five-year integrated law programmes including BA LLB. NLU Delhi is the only National Law University (NLU) among the 17 NLUs in India which is not a member of CLAT 2015 Committee.

AILET 2015 Preparation Tips: How to prepare in last days