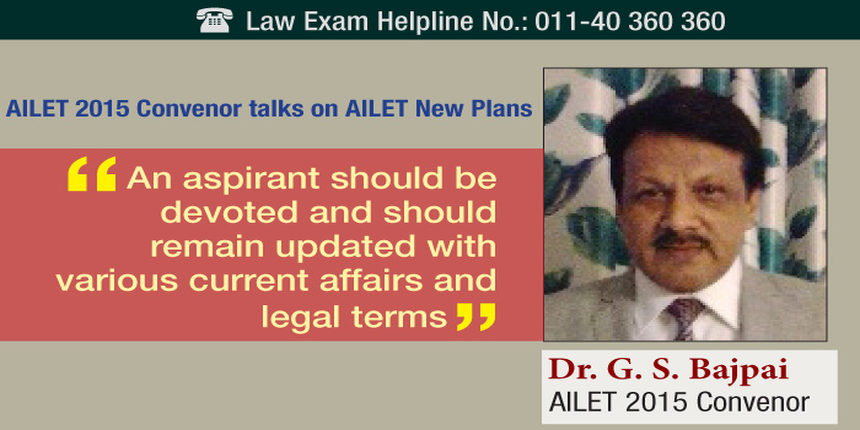 As the law admission season begins with the applications forms two major national law entrance exams’, CLAT 2015 and AILET 2015 from January 1, 2015, law aspirants have buckle their belts to prepare for the most sought after law entrances. Careers360 interviews AILET 2015 Convenor, Dr. G.S. Bajpai on new plans of AILET 2015.

The Convenor, who also happens to be NLU Delhi Registrar,shares his inputs on what the University has planned for hassle free conduct of AILET 2015.

In this exclusive interview, Dr. Bajpai also talks on the expectations of NLU Delhi with the candidates appearing for AILET 2015.

Read the interview of AILET 2015 Convenor to know what he suggests for cracking AILET 2015.

Careers360: What are new plans for AILET 2015?
AILET 2015 Convenor: National Law University, Delhi is an institute endeavoring to make legal education as justice education. The institution strongly believes to utilize education as an instrument of social, political, economic change to prepare lawyers who will be competent in the art of advocacy both at the trial and appellate level and also skilled in judicial administration.

Aspirants who wish to apply for AILET 2015 are required to fill the online application available from January 1. The application process has been made completely online for easier processing of the applications.

This year, AILET 2015 will be conducted on May 3, 2015, at a number of centres throughout India. The University has identified new test centres which would be made available to the aspirants for appearing in AILET 2015 to aid the candidates with a centre of their choice.

Careers360: As NLU Delhi Registrar and AILET 2015 Co-Convenor, what expectations do you have from AILET 2015 aspirants?
AILET 2015 Convenor: Law is emerging as one of the most popular career choices in today’s era. The aspirants should recognize the fact that now a days, a degree in law will not only enable them to become a lawyer but also equip them with the ability to work in sectors like corporate management, legal services and administrative spaces.

Careers360: What skills are you looking in AILET 2015 aspirants?
AILET 2015 Convenor: Hardwork, dedication, good logical aptitude, good language and comprehension skills are some of the parameters which are mandatory to crack AILET.

Careers360: As law entrance season is beginning, aspirants may be planning to grab a seat in the premium NLU Delhi. What would you like to suggest AILET 2015 aspirants?
AILET 2015 Convenor: As the University has around 70 seats for B.A. LL.B (Hons.) programme and more than 15000 candidates apply for admissions, the competition is stiff. The aspirant should be devoted and should update himself/ herself with various current affairs and legal updates. Also, solving previous year’s question papers might prove useful in knowing the trend and type of questions.

At the end, I shall say that the aspirant should remain calm and focused to crack AILET 2015.

Let me wish best of luck to all the aspirants.