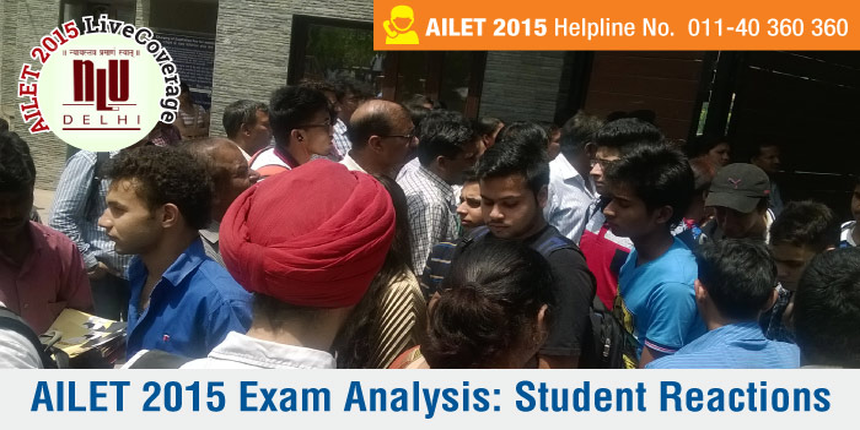 As AILET 2015 was conducted on May 3 at 38 exam centres located in 19 cities of India, Careers360 brings you firsthand exam experience straight away from the exam centres. AILET 2015 Exam Analysis provides you an overall overview of the second most coveted law entrance exam with student reactions on AILET 2015.

NLU Delhi has conducted second most coveted law entrance exam in offline mode for admissions to around 80 seats for five-year integrated law programmes including BA LLB.

AILET 2015 Exam Analysis – We bring you first-hand experience of AILET 2015 from the test takers themselves. Candidates who have appeared in AILET 2015 on May 3 can go through the paper analysis of the law entrance exam.

Section-wise Analysis of AILET 2015 – The law aspirants who had appeared for AILET 2015 on May 3 reported that English section was easier than the other sections, while Legal Aptitude was the toughest section.

Abhinav – This was my second attempt and was of the same pattern as last year. It was a moderate paper this year too. Legal Aptitude was the toughest section which had most of the questions from situation and principles.  I couldn’t attempt Mathematics section.  General Knowledge had more questions from Current Affairs section and was of moderate level. There was one comprehension passage with five-six questions and was a bit lengthy.

Aditi Gupta –This is my first attempt and English was the easiest section for me. I didn’t have the time to begin with Mathematics section though as far as I have attempted the other sections, Legal Aptitude was the toughest of all. English had a comprehension passage and questions from vocabulary, cloze paras, para jumbles, etc.

Raunak – Mathematics was the toughest section as I could not attempt it. General Knowledge had some questions from static GK and rest it was all from recent news and updates. English section had a comprehension with 5-6 questions and some word meanings, antonyms, etc.

AILET 2015 is the second most sought after law entrance exam for admissions to 80 seats in NLU Delhi for five-year integrated law programmes including BA LLB. NLU Delhi is the only National Law University (NLU) among the 17 NLUs in India which is not a member of CLAT 2015 Committee.