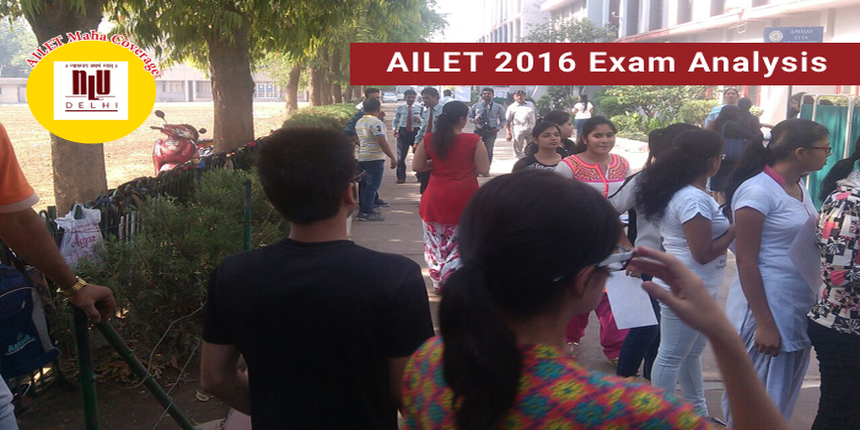 AILET 2016, one of the most popular law entrance exams in India with as many as 16,777 aspirants appearing for 81 BA LLB seats in NLU Delhi was conducted on May 1, 2016. While the paper is, generally, considered to be one of the toughest law entrance tests, this year the paper was surprisingly easier compared to previous years. “The paper was easier compared to last year,” said Rajendra Khadav of Crack CLAT Tutorials. “GK was, of course, full of questions from current affairs, so aspirants who were updated with daily news had a good chance of scoring.”

Careers360 covering the law exam from various exam centres across Delhi, brings ‘AILET 2016 exam analysis’ to get you an in-depth analysis of the test.

English and GK make it easier for students

As in the previous years, Reasoning was the toughest section in AILET 2016 with puzzles and analogies covering most of the section. “Critical reasoning took a bit of my time,” said Sunil. “I got stuck in analogies and lost almost 20 minutes of the test covering one question.”

However, some students were already expecting this section to be tough and were geared up for it. “I knew reasoning would take time, especially, puzzles. I took a lot of mock tests to set my timing for this section which really helped me to manage my time in the test,” said Naman Dubey who took the test from Delhi.

While Critical Reasoning was tough, Legal Aptitude was the surprise element in the test. Previously, AILET papers usually had questions from Principles and Facts, while this time, the entire pattern of this section was changed. However, while the pattern took students aback for a while most were able to recover as the new pattern was relatively easier. “I was expecting questions on principles and theory but instead the entire set of questions followed a new format,” says Sanam. “Nonetheless, the section was not so tough.”

As in previous years, GK and English were the easiest sections of the lot. Most of the questions were from Current affairs and offered students a very good opportunity to score. “English was very easy. Besides, for those who were updated with the latest news GK was easy too,’ says Naman Dubey.

Most of the experts echoed the view of the students putting English and GK in the easier slot while Reasoning and Legal aptitude where a notch higher on the difficulty scale.

“Overall the paper was easier compared to last year,” said Harsh Gagrani, LegalEdge Tutorials. “English was a relief as topics reading compressions and grammar were easy to solve and took less time,” he said.

According to Rajendra Khadav, there were 10 passages and five fill in the blanks in English. “It was less time consuming than last year.”

In terms of Cutoff, the experts did not differ much with Rajendra Khadav putting the score at 105 and Harsh Gagrani putting it at 104.

AILET 2016 was an offline paper comprising 150 questions of 150 marks. Candidates were required to choose one option among the four provided in the question-booklet of AILET 2016. The 150 questions covered five sections including English, General Knowledge, Logical Reasoning, Legal Aptitude and Basic Mathematics.