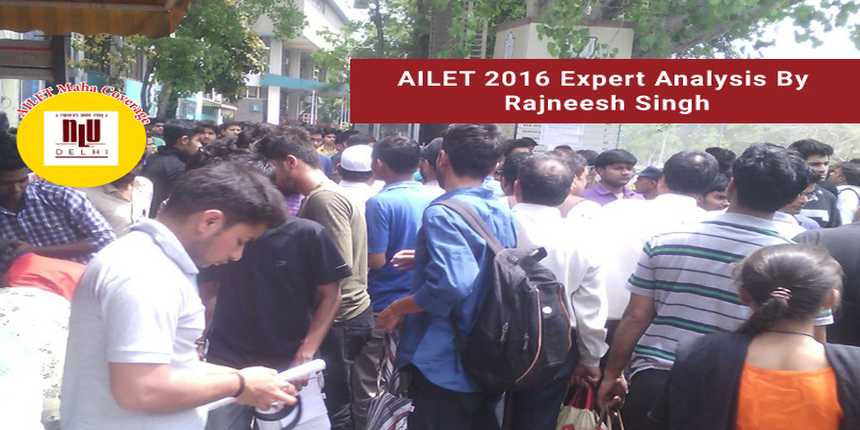 ‘Easy’ was the word majority of the AILET candidates used when asked to describe the law entrance paper which was held on May 1, 2016. Surprisingly, unlike previous years, English and GK scored the least points in the difficulty scale in this year’s test while reasoning and Legal aptitude were found to be tricky and time consuming.

Interestingly, experts too joined the chorus and termed the AILET paper comparatively easier to previous years, while taking exception to Reasoning and Legal Aptitude.

Rajneesh Singh said that the questions in AILET paper have no fixed pattern. He says, “Every year it has few new things. This year, the paper was overall good, with balanced GK having some questions requiring a little more in-depth knowledge.”

The law exam expert also said that Logical Reasoning (LR) section was good. He remarked, “Legal Aptitude section had more of legal GK and test-takers needed little extra time for LR. This way AILET 2016 was a test more on the most important parameter, the reasoning skills.”

Read below to know how Rajneesh Singh analyses different sections of AILET 2016.

The section was a very good set. While 5 questions were extremely tough, another 10 questions required in-depth knowledge. Rest were average to easy.

The test-takers who had put in their hard work and have deep interest towards general awareness can answer these questions amicably. However, there are some students who mistakes with a lot of preparation while expecting to solve all or majority of questions. This expectation often makes them diffident during the test and decreases their efficiency.

These candidates must understand and leave their false notion that it is not about scoring a perfect 100 per cent but about competing over the best even with the score of 58 per cent.

Candidates with a very good preparation would be able to score 31-33 in this section as 26 to 28 is a very competitive score for getting into the top 100 rank.

Some legal reasoning questions required extra-legal knowledge. Legal GK questions were of the same trend. Overall the section was ok and the prepared candidates would be able to score 26 plus.

This section had a good set of questions, with a mixed of Verbal reasoning questions and complex analytical reasoning along with a few series questions. I would say it was a balanced section. AILET test-takers would have been able to score over 26 marks. On the contrary note it was not easy to score.

The section was not as easy as it used to be. However, not a tough one as those good at maths would be able to make a competitive edge here.

Candidates would require a decent score of 104 to 107 to get in the first list of AILET 2016 admissions.

AILET 2016 paper can be regarded as an amazing rehearsal for CLAT 2016, which is scheduled to be held on May 8. If CLAT also continues setting questions of higher standard, then experience of AILET 2016 would help.

Candidates need to come out of the mind set of board exam pattern. Attempting correct set of question matters a lot and that is what would help you in qualifying the exams. Moreover, rejection of time consuming/undoable questions very quickly plays a vital role too.

As the law entrance exam was held on May 1 for admissions to BA LLB programmes for 81 seats on offer, the results of AILET 2016 will be declared on May 15.

Stay tuned to https://www.law.careers360.com for more updates on AILET