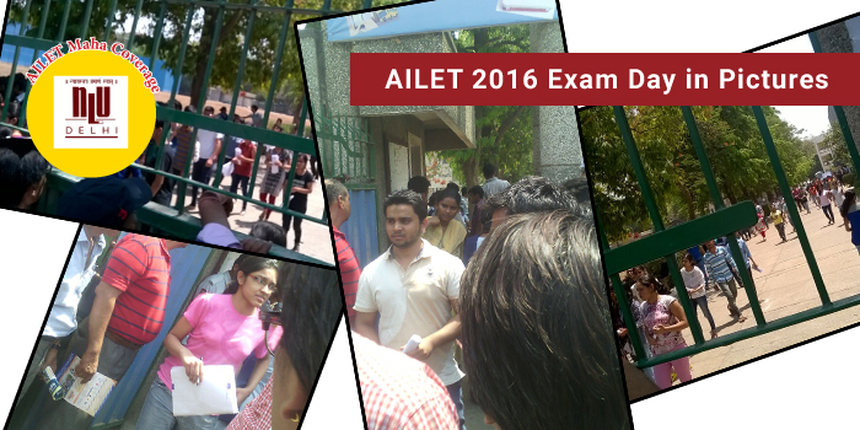 All India Law Entrance Test (AILET) 2016 was conducted on May 1 for admissions to BA LLB programmes in National Law University Delhi (NLU Delhi) at as many as 19 cities of India. As Careers360 team covered the BA LLB admission test of NLU Delhi from a total of 16 exam centres in Delhi, we bring ‘AILET 2016 in pictures’ to provide you glimpses of the exam day.

‘AILET 2016 in pictures’ will take you to the exam centres virtually, where you can view the images of the events occurring at the different exam centres.

AILET 2016 began at 3:00 pm and conducted for a duration of 90 minutes, where law aspirants would have to answer a total of 150 questions carrying a maximum of 150 marks.

The test-takers of AILET 2016 gather around notice boards to check their exam rooms and verify roll numbers.

AILET 2016 aspirants queue in to enter their examination centres. The exam officials verify their roll numbers and identities through the admit cards of All India Law Entrance Test.

Exam centre officials close down the gates as some late comers rush in.

Parents waiting outside the exam centres in the scorching heat as the paper ends in next 90 minutes.

The long 90 minutes come to an end as exit gates open and AILET 2016 test-takers getting outside the exam centres.

As per the test-takers experience, AILET 2016 was a moderate in terms of paper difficulty.

AILET is the law entrance conducted by NLU Delhi for admissions to 81 BA LLB seats.

Stay tuned to law.careers360.com for more feature and updates on AILET