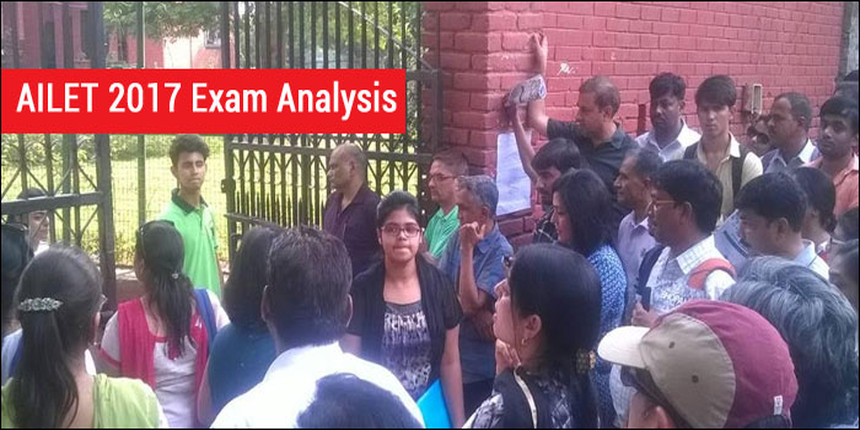 While AILET has always been considered to be a relatively tougher law entrance test, the initial feedback received from students and coaching experts suggests that AILET 2017 conducted on May 7 was among the tougher exam papers hosted by NLU Delhi thus far. Careers360 presents to you a comprehensive exam analysis of AILET 2017, with students describing how they fared in their paper and leading coaching experts sharing their insights.

The All India Law Entrance Test (AILET) conducted by National Law University (NLU) Delhi has made a name for itself over recent years for being one of the most popular law entrance exams held in India. With over 18,000 applications being received for AILET 2017, the increasing demand for the 83 BA LLB and 50 LLM programme seats at NLU Delhi was reflected this year as well. Held in offline mode on May 7, AILET 2017 exam pattern remained unchanged with the question paper comprising 150 Objective MCQs (Multiple Choice Questions). The total duration of the paper was 90 minutes.

The AILET 2017 paper pattern was on the following lines

As mentioned, a majority of test-takers found the test to be tougher than in preceding years. Because of the difficulty level of the questions, many students also shared that the time limit of 90 minutes was insufficient for them to complete the paper in a satisfactory way. “AILET 2017 was definitely tougher and lengthier than expected,” shared Vishnu, who was appearing for the paper for the second time.

For Shantanu, the Legal Aptitude questions were toughest but he was among the minority who found the GK section to be balanced with an equal proportion of static and current affairs questions. In lieu of GK, many students looked to other sections to compensate. “GK was indeed tough but thankfully the Logical Reasoning and Basic Mathematics sections came to the rescue,” said a relieved Prerna. “Overall, the paper was tough and lengthy and for me English also consumed a lot of time,” shared Aniket.

“The paper was definitely more difficult than usual, probably one of the most difficult AILET exams ever,” said Harsh Gagrani, Director of LegalEdge Tutorials. According to him, AILET 2017 held plenty of surprises for students across different sections. “For the first time ever, there was no English Reading Comprehension passage as it had been completely replaced by CLOZED test. But the remaining English section questions remained the same, covering antonyms, synonyms and phrases. Also, legal aptitude was very surprising because of the lengthy fact-based questions asked”, he shared. In his opinion, students who kept their calm when faced with difficult questions, had good reading speed and had brushed up on their legal knowledge would have the best chances of clearing the exam.

According to Rajneesh Singh, Mentor at The Do-Zen, the cutoff this year might come down significantly, perhaps even reaching 90 as compared to 105 for AILET 2016. “Many considered it a tough paper but I feel it was a good paper for those who are good students. If the paper quality is good, then it helps weed out the undeserving students. CLAT should also take a lesson from this,” he said. Mr. Singh agreed with most students’ assessments regarding the difficulty of the GK section. “There were atleast 10 questions in the GK section which were almost impossible to answer unless a student had specifically prepared from these topics. However I don’t feel this is an injustice as the students who prepared well and kept their calm would waste no time on it,” he concluded.

Stay tuned to law.careers360.com for more features and articles on AILET