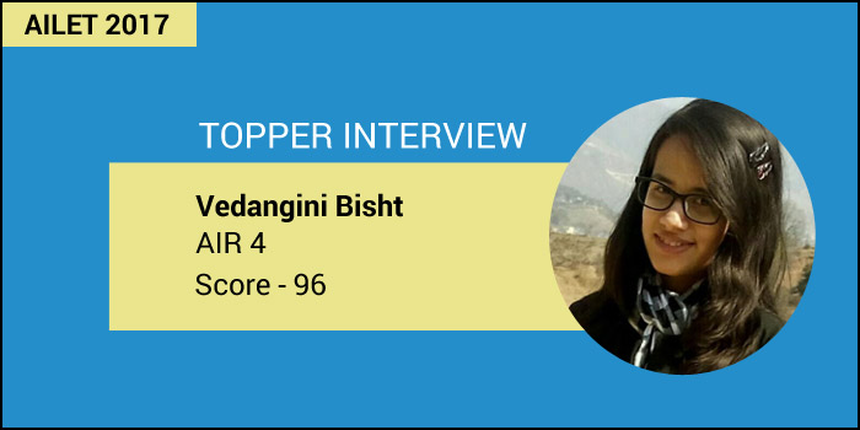 The All India Law Entrance Test, one of India’s most popular and competitive law exams, was conducted by the National Law University (NLU) Delhi on May 7, 2017. Over 17,000 candidates appeared for the 83 seats offered by NLU Delhi in the BA LLB (Hons.) programme through AILET 2017. On May 24, NLU Delhi announced the Result of AILET 2017 along with the Merit List.

Vedangini Bisht, a 17 year old from Uttarakhand, bagged the fourth rank in the exam with a score of 96. A student of General BC Joshi Army Public School, Pithoragarh, Vedangini pursued the Commerce Stream under the CBSE Board and is currently awaiting her Class 12 Board Exam results. In a conversation with Careers360, she shares about her success mantra in cracking AILET 2017, the strategies that proved most beneficial for her and her advice to future AILET aspirants.

Below are the excerpts of the interview with this AILET 2017 topper.

Careers360: Congratulations Vedangini on achieving the 4th Rank in AILET 2017! How did you feel when you checked the results and what was your family’s initial reaction upon knowing you were one of the exam toppers?

Vedangini Bisht: Thank you! It came as a very pleasant surprise to know that I had achieved the fourth rank in AILET 2017. Infact, it was my father who was notified about this by LegalEdge, my coaching centre, and he conveyed the information to me. I tried searching online but couldn’t see the results initially. Finally when I was able to see and confirm the result, it made me and my family really happy.

Careers360: Were you expecting this success in AILET 2017?
Vedangini Bisht: I was always confident of qualifying the NLU Delhi BA LLB entrance test but didn’t really expect to get such a high score and rank. My CLAT 2017 did not go as well as I expected, hence I did not know what my AILET Results would be like.

Careers360: What do your parents do?
Vedangini Bisht: My father is a BSF (Border Security Force) Officer, presently on deputation to SSB. And my mother is a homemaker.

Careers360: What motivated you to pursue law as a career option?
Vedangini Bisht: I was good in debating and my potential was noticed by my father. While I was in Class 10, I had made my mind to study law after discussing this with my father. We together worked hard and developed strategies to crack the entrance exams, which is the first important hurdle for achieving the aim. Moreover, I find law as very satisfying career in comparison to other professional degree courses.

Careers360: What strategy did you evolve for section-wise preparation?
Vedangini Bisht: In my opinion, English and General Knowledge are vast subjects and therefore would require long-term preparations. I exclusively focused on these two subjects along with Logical Reasoning throughout my Class 11 and only started studying Mathematics and Legal Aptitude during Class 12th. I felt that the latter two subjects have a smaller syllabus and can thus be completed within a short duration. Following this strategy and focusing on sections separately helped me cracking AILET.

Careers360: Was it your first attempt as you appeared for your Class 12 board exams too? How did you manage to focus on both?
Vedangini Bisht: Yes, it was my first attempt in AILET. I think most of the AILET takers are Class 12 appearing candidates only. There is nothing special in this. However, the key factor lies in balancing the preparations for Class 12 boards and the law entrances together, given that both are of equal importance. Most of these law entrance exams are held almost around the same time and it becomes naturally difficult to focus on both for most of us. What helped me was that I began to prepare for law entrances right from Class 11th itself.

Careers360: Are coaching classes important?
Vedangini Bisht: I think coaching is important for candidates preparing for law entrances like AILET and CLAT. I took help from LegalEdge Tutorials and found it to be extremely beneficial. I should mention here that given the fact that I stay in Pithoragarh, which is a small town in Uttarakhand, it was very difficult for me to access coaching classes directly. Hence, I signed up for LegalEdge’s distance learning and correspondence classes, which however, was not different from the regular classroom mode. What makes the difference is a candidate’s approach to take the subjects and appear for them. A candidate should devote enough time for effective preparation.

Careers360: How are mock tests helpful?
Vedangini Bisht: Strategy matters most in clearing an exam like AILET. There’s a lot of material out there so a student has to be selective and know which to select. Time management is also very important. Unlike in the interviews of many toppers that I read, I did not feel the need to practise many mock tests. I just restricted myself to the mock tests provided by my coaching institute. I believe that if you are able to give one mock test seriously and use it for analysis, then there is no need to attempt a multitude of mock tests..

Careers360: Two long years’ preparation and a huge success. How did you keep yourself rejuvenated during your preparation days?
Vedangini Bisht: I love reading books. Books help me in a number of ways. While they helped me in refreshing my mind in between the preparation, on the other hand I could improve my vocabulary too. The last book I read was Sania Mirza – Ace against Odds. I have also read most of the books authored by Robin Sharma and Rashmi Bansal, while Dan Brown and Roald Dahl are among my other favorites.

Careers360: How did your Class 12 Board Exams go?
Vedangini Bisht: My 12th board exam went very well. I am expecting good marks but fingers crossed till then.

Careers360: What advice would you give to future AILET aspirants?
Vedangini Bisht: I would suggest them to prepare for the law entrances with consistency. They should believe in their hard work. The preparation strategies may be different but approaching toward goal is important. Learn from the previous mistakes and improve on them. All the best!

All India Law Entrance Test, considered as one of India’s most popular and competitive law exams, was conducted by National Law University, Delhi on May 7, 2017. Over 17,000 candidates appeared for the 83 seats offered by NLU Delhi in the BA LLB (Hons.) programme through AILET 2017.

Stay tuned to law.careers360.com for features stories and topper interviews on AILET