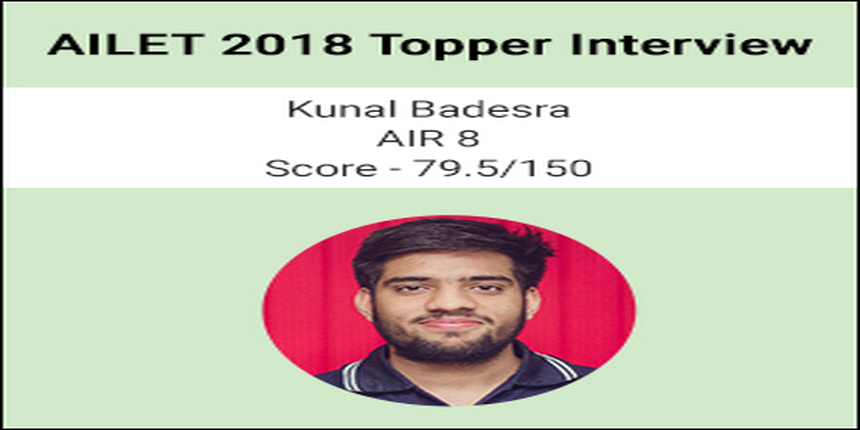 AILET 2018 Topper Interview - AILET 2018 AIR 8 Kunal Badesra shares his journey of securing his place among top 10 rankers of AILET 2018. A humanities student, Kunal started preparing for law entrance tests from Class 11. “The main thing that gave me an edge was, I didn’t freak out on the D-day and kept myself calm and later on it paid off”, says Kunal.

Kunal’s family was supportive during the preparation period and moved from their hometown so that he can get better training. Through his board exam preparation he made it a point to solve a minimum of 75- 80 mocks which help him cope with the examination. Kunal owes his success to his family who constantly supported him through his dream. Apart from AILET, Kunal also attended MHCET Law, SLAT and CLAT. A fan of science fiction movies and stand up comedy shows, he shares his preparation strategy and success mantras with Career360.

Read more to know about Kunal’s strategies for AILET 2018

Excerpts from the interview

Careers360: Congratulations on bagging AIR 8 in AILET! How do you feel being among the top 10?

Kunal: I didn’t expect myself to be in top 10 but I knew I would crack AILET. It is an amazing feeling being in the top 10 of a national level exam. I feel humbled yet honoured being among the toppers of this country. I would like to express my gratitude to all those who helped me attain this level and those who supported me throughout my two years of preparation.

Kunal: I belong to a family of four. My father is a Lecturer in History. He has always supported me in following my pursuits. Although, I had to leave my hometown as my family and I recognised the need for a better coaching that my dream result will surely ask for, yet, my family was always there for whatever I needed, be it support or constant guidance. I consider myself determined and self motivated. I am constantly inspired by my parents, especially by my father. The love and understanding from my mother is always a big help.

Kunal: I want to pursue law as a profession as I consider it to be a very giving field when it comes to financial considerations. Intellectually as well as in terms of opportunities, an individual gets to make a long list of contributions to the community.

Careers360: Apart from AILET 2018, which other Law entrance exams did you take? Howe was your performance in those exams?

Kunal: I started preparing for law entrance exams in eleventh standard itself. I had humanities so there was less burden from the CBSE side.

Section Wise Strategy -
GK- Consistency is the key. It was a combination of newspaper, current GK websites , and static GK books. In the later phase of preparation sound revision is the key. I kept myself updated with current case laws and judgments.

Logical Reasoning - Preparation for NTSE in class tenth helped me preparing for LR section and for CR solving inferential RC’s and LSAT papers helped me a lot.

Maths- Maths was not a hurdle for me and eliminating options helped a lot.

English- English was my weakest section in the early phase of preparation but thereafter i worked hard on the topic , solved as many question as I could, after a rigorous practice , I eventually gained confidence and started scoring well.

Legal- By solving past years papers and coaching material, I managed to have a good command over the legal section.

Kunal: My weakness was English so, as I have mentioned above constant practice for 2 months and then rummaging over those in the last 2-3 months really helped me a lot in increasing marks in CLAT and AILET. My Strengths were GK and LR, so that really gave me an advantage over others in mock tests.

Kunal: I had an accident on the 1st of May and AILET was on 6th, it was really a tough job to sit there and concentrate over the CR and the Legal Reasoning questions but somehow I managed to complete the paper on time. The main thing that gave me an edge was, I didn’t freakout on the D-day and kept myself calm and later on it paid off.

Careers360: This was the first time AILET introduced negative marking. Were you aware of this? How did you tackle the paper?

Kunal: I always had a tendency to attempt each and every question in CLAT where there was already negative marking. So, the introduction of negative marking didn’t really affect me.

Careers360: How did you balance the board exam preparations with AILET and other law entrance tests?

Kunal: I was a Humanities student and I didn’t have much pressure from CBSE side as subjects were easier in comparison to other streams. In the penultimate week of February, I started preparing for my boards and I got ample of gap between two exams that I covered the entire syllabus in time.

Kunal: Yes, I took coaching from CLAT PREP, Jaipur.
It indeed, was important for me as it gave me a competitive environment and regular mocks provided, helped me gaining confidence over my prep. I discussed my weaknesses with my faculty and worked upon that and eventually gained confidence over those topics.

Kunal: I started giving mocks in August, 2017.
I gave 75-80 mocks before CLAT and AILET.
It really helped in time management and assessing my virtual All India Ranks before the main exam. Analyzing mocks made sure that I won’t miss out on the topics that are weak or consuming a lot of time and next mock scoring good in same section/topic helped me overcome my fears.

Kunal: As I mentioned before, I am a big fan of Sci-fi movies, Stand-up comedy and T.V. Shows but during the preparation phase, it was tough to get time for all that but I managed to simultaneously watch all that so that I don’t feel stressed out and get refreshed during the prep phase.

Kunal: For AILET, keep a note on current issues and case laws/current judgment, as it has a lot of weightage in AILET. One must not be carried away by Past Year Papers in AILET and not stick to any pattern as you’ll get bouncers in the exam. Don’t get stressed by your low mock scores.