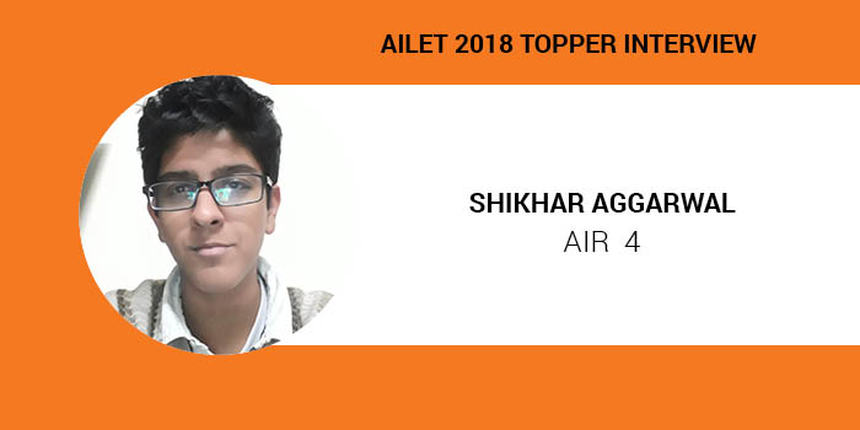 AILET 2018 Topper Interview - Shikhar Aggarwal who did his schooling from Amity International School, Gurgaon managed to bag AIR 4 in AILET 2018 with 83 marks out of 150.

Ex-Amitian, Shikhar feels that being a lawyer would suit his personality and that becomes the major reason of his opting law as his career. Shikhar, who is a cricket lover shares his success story with us in an interview with Careers360 where he tells about his preparation strategies, number of mock tests he appeared in and how taking coaching is important for a law aspirant. Let us throw some light on his journey from a simple boy to being a topper.

Careers360 - Congratulations on securing the position of AIR 4. How do you feel?

Shikhar - It certainly feels very good to get an excellent rank in one of the elite law entrance exams of this country, AILET 2018. The effort put in over the last one-and-a-half years surely paid rich dividends. I feel humbled with this result of mine.

Careers360 - Tell us something about yourself and your family.

Shikhar - My father works at BA Continuum as a Chartered Accountant and my mother is a homemaker. My younger brother is doing his schooling now.

Careers360 - What motivated you to pursue law?

Shikhar – I always had a strong inclination towards law. Being a lawyer changes many things in terms of personality and knowledge. I have observed a drastic change in law which opens many avenues towards legal research, academic, litigation and many more.

Careers360 - Apart from AILET 2018, which other Law entrance exams did you take? How was your performance in those exams?

Shikhar - I appeared in the Common Law Admission Test (CLAT) along with AILET. I scored 148/199 in CLAT, and managed to secure AIR 6 in that exam.

Careers360 - When did you start preparing for the CLAT and AILET and what was your section wise strategy?

Shikhar - My preparation started approximately 12 – 15 months prior to the exam. I made sure that all topics are covered, with all stuff to be remembered done once board exams are done. With that in mind, I used the following strategy for each section:

GK – Marking important questions and information provided in the weekly Manthan provided by CL, proper notes-making of important trivia. Started studying it only after boards ended.

Maths – Had a natural inclination towards Maths. I was thorough with most of the formulae and concepts involved. Primary focus was on practicing unusual questions.

Legal – Past year questions, understanding concepts and doubt clearing. Attempting a variety of questions from mocks and reference books.

Careers360 - Which were your strong and weak sections and how did you prepare for them?

Shikhar - I was particularly strong in Maths, Analytical Reasoning and English grammar. I had to predominantly work on GK, Legal and English vocabulary. Initially I did not study GK till my boards but after that focused completely on memorizing current affairs. I even made notes to strengthen my roots for English and tried diverse question for Legal.

Careers360 - What was your exam day experience? What strategy did you follow to ease the tension of the examination?

Shikhar - I feel that going in with a sound strategy, and a good contingency plan is the key to attempt the paper tension free. Keeping this in mind, I firstly had a quick glance through the question paper, and felt that while I could attempt a majority of GK and English accurately in less time, Legal reasoning had awfully lengthy case problems. So, I aimed to do around 80 – 90 questions before doing those questions. It is always better to have momentum by your side when you are trying to get through a rocky set of questions on the paper.

Careers360 - This was the first time NLU Delhi introduced negative marking in AILET 2018. Were you aware of this? What strategy did you adopt to tackle negative marking?

Shikhar - Yes, I was well aware of the fact that AILET 2018 was going to have negative marking. I am generally not very concerned about negative marking, especially when accuracy gets you a proportionate reward in terms of marks. The focus has always been on getting as many correct answers as possible. And I even feel that it is all right to make a sensible guess in questions where you are able to eliminate certain options, because the risk is certainly worth it. There is not much to lose and all to gain in attempting much of the paper versus leaving several questions blank.

Careers360 - How did you balance your board exam preparations with AILET and CLAT preparations?

Shikhar - I tried to strike a good balance between preparing for both of these. It is important to realize that one cannot make himself entirely dependent on the performance in either boards or the entrances, because anything can go wrong on the day of the exam, rendering all prior planning useless. Keeping that in mind, the focus was majorly on completing everything except GK by December, and then focused completely on board exams preparation for the next 3 months.

Careers360 - Did you take up any coaching? How important was coaching for you?

Shikhar - Yes, I took coaching from Career Launcher CL LST program. A formal coaching programme is very important in making a student push towards preparation with a streamlined focus and access to mock tests and study material.

Careers360 - When did you begin taking mock tests? How many mock tests did you take before taking the exam? How did mock test help you in law exams?

Shikhar - I began taking mock tests around August 2017, when a bit of the syllabus was covered. I took a total of around 30 mock tests in these months leading to the exam. The reason behind this can well be the fact that I gave a lot of attention towards analysing mocks. One needs to identify areas where improvement is needed and see what his/her standing is. In that manner, giving more mock tests would not ensure a seat, especially when one is not able to see what is going wrong/address a stagnant score. One should experiment with mocks as much as possible, in order to develop a proper test taking strategy and get used to the pattern. Mocks helped me in developing speed and later, accuracy.

Careers360 - Tell us something about your hobbies. Did you get time for them during the preparation phase?

Shikhar - I am a big cricket fan, and love watching and playing the sport with my younger brother. I also have an inclination towards watching movies and videos over YouTube. Yes, I got time for my hobbies as I believe that managing time is a skill. I did not study for 24 hours, bifurcated hours according to my to-do tasks.

Careers360 - What are your suggestions for AILET aspirants who will appear for the test next year?

Shikhar - Be calm, be focused. Have faith in yourself; and be free from fear. Don't let a bad mock exam demoralize you. Don't get intimidated by what others are doing. What only matters is your performance on the day of the exam, and the effort behind it. Yet, respect fear, for it will keep you grounded. All the best for AILET 2019 & CLAT 2019!!