AILET 2019 Topper Interview: Naomi Manoj, AIR - 7 says law is my passion - No one can understand the preparation of an examination better than someone who aced it! The All India Law Entrance Test is one of the most difficult entrance tests in the country. AILET 2019 was held on May 5, 2019. Careers360 scheduled an AILET 2019 topper interview with Naomi Manoj, one of the toppers of AILET 2019. Naomi managed to score 81.5 marks in the examination and secured a seat for herself in the National Law University of Delhi. In the AILET Topper Interview 2019, Naomi Manoj shares tips and tricks for AILET. Read the complete article to find out what the AILET topper 2019 has to say. 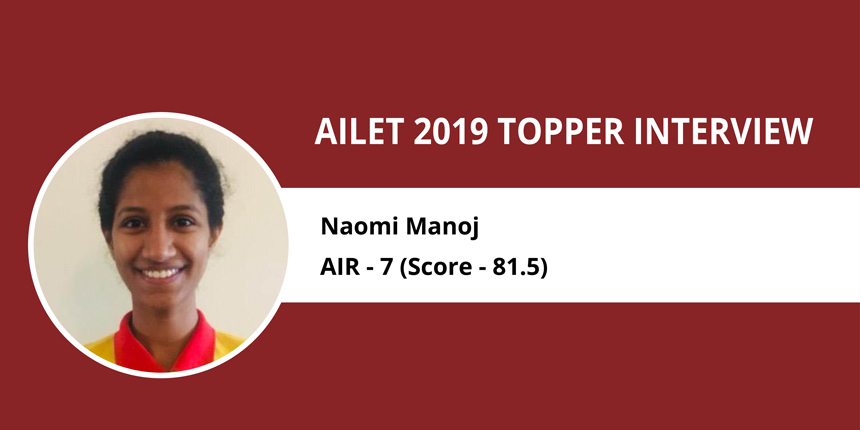 Careers360: Congratulations! How are you feeling and how are you celebrating?

Naomi Manoj: Thank you, I am so happy. I really did not expect it at all and it came as a pleasant surprise. I am so grateful for everything and I have my parents, my teachers and my friends to thank for it.

Careers360: That’s nice. Can you tell us a little bit about your family.

Naomi Manoj: My dad’s an engineer and works in ONGC. My mother is a doctor. I also have a sister, she is a third-year medical student.

Careers360: What made you choose a career in law?

Naomi Manoj: I was really confused as to what to do when I grow up. And sometime towards the end of Class XII, I read an article about law and the philosophy behind it. I found it very interesting and I realised that this is what I wanted to do. My cousin is also pursuing law so I borrowed a couple of book from her. I couldn’t stop reading till I finished the book and it felt like I found my passion!

Careers360: Who is your inspiration?

Naomi Manoj: It would definitely be my mother. She is a very strong woman, she is a working mother and is very hardworking lady. She has always tried to keep us happy and give us the best. She has done what she always wanted to do and became a doctor. So yes, She is my inspiration.

Careers360: So when did you start preparing for AILET?

Careers360: Can you share your preparation strategy with us?

Naomi Manoj: There is no fixed syllabus for AILET, so it can be a bit difficult when you step into it. So for that I joined the coaching institute to get the guidance. A coaching institute tells you where to start from and how to begin. AILET is a tough exam! The time is limited and you have to attempt 150 questions in 90 minutes, thus, speed is a crucial factor. In order to achieve the required speed one must practice and take as many mock tests as possible. Being well versed in english will help, and stay in touch with current affairs. I found Mathematics a bit difficult, personally, in spite of the fact that I took mathematics in Class XI and Class XII. I used to watch a lot of YouTube videos to strengthen this section.

Careers360: Which other exams have you taken apart from AILET 2019? How was your performance in those?

Naomi Manoj: Apart from AILET, I wrote CLAT 2019 and SLAT 2019. In Symbiosis law Entrance Test, I scored 128 marks . CLAT results are yet to come, but I think I did much better than I expected, so I am happy about that. I think I am getting around 160 but its too soon to tell.

Careers360: What was your preparation strategy for the general knowledge section?

Naomi Manoj: For general knowledge I did not rely on a single source, I tried to expand my sources as much as possible. I used to read GK Today daily, and if not daily I used to read it in bulk at the end of the month. Then I used to follow Study IQ videos on YouTube. I got notes from my coaching.

Careers360: How did you prepare for Mathematics section?

Naomi Manoj: For Mathematics, I mainly depended on YouTube video and I noticed that there were a set of questions from which the questions in AILET are asked. There is a certain type of questions that they usually ask. And I tried my best to make myself familiar with those types.

Careers360: What was your strategy for the legal aptitude section?

Naomi Manoj: I found this section a bit tricky because in various guide books the answers would be different. So, I would just stick to what I felt was right, and in the end I used to eliminate the options. That way the answer would be correct. I used the Universal’s Guide, it is an excellent book and has many questions for legal section. I also referred to Pearson general knowledge manual. For legal aptitude section, I would suggest to not expand the sources, as it could lead to confusion.

Careers360: Can you share your preparation strategy for the reasoning section?

Naomi Manoj: I found this section easy, so I didn't really focus much on it. But, I did solve the Universal’s Guide and Legal Awareness and Legal Aptitude by A.P. Bhardwaj for this section.

Careers360: What role have mock tests played in your success?

Naomi Manoj: Mock tests have played a huge role! Like I said before, it really helps you in managing your time and getting an idea on where to focus on. Mock tests also help you in determining which areas are you weak in. Mock tests really help in getting an overall idea of the examination and how to get into the right track for it.

Careers360: How active were you on social media during your preparatory phase?

Careers360: What did you do to destress yourself?

Naomi Manoj: I have a really supportive family, friends and teachers. I used to just call someone up to destress. But, the best method to destress according to me, is to read a book. It transports you to a totally different world and you can let go of your worries and fear.

Careers360: You emphasize on how the coaching has helped you, so do you think coaching is a must for AILET?

Naomi Manoj: Not really. I think coaching is necessary at the beginning or the foundation stage. After that people have to work hard on their own. There is no fixed syllabus for AILET, so there is a limit to how much a coaching can help.

Careers360: Did you face any difficulty during the examination?

Naomi Manoj: Not really, I was calm during the exam. Except towards the end, I panicked a bit but it went fine without any other issues.
Careers360: What is your advice to the future AILET aspirants ?

Naomi Manoj: Just know that everything is within your reach and stay positive. Work hard and you will achieve what you want.

AILET Vs LSAT India - AILET and LSAT-India are counted among ...

AILET sample papers 2020, given in the page can be downloaded ...

how to crack clat and ailet in 2 months?

First I would suggest you to join a good coaching for CLAT preferably, to ensure that you understand the concepts of legal reasoning properly, and you have a good teacher or a senior in law school, who can help you clear your doubts in reasoning. Give at least 25–30 mock tests, and analyze them properly, recognizing your weak points. For current affairs you can refer to gktoday.in, read and re read the current affairs again and again. Maths and logical reasoning is all about practice, the more you practice the more you improve. The same goes with English, for improving your word power you can refer to word power made easy by Norman Lewis. But as you only have two months you need a rigorous practice, try to devote 7–8 hours to self study for CLAT preparation. If you are talking about studying for both CLAT and AILET simultaneously, then its difficult. But try to solve papers and have a clear understanding about the concepts.

Hope this helps! All the best.

Previous year cut-off for AILET has been as follows;

The Syllabus consists for five sections such as General Knowledge, Reasoning, Legal Aptitude, Mathematics and English.

You can go through the following books;

For English, Wren and Martin is the best grammar books to build the basic concepts, for Vocabulary there's Norman Lewis Word Power Made Easy, you can also practice through Objective General English by SP Bakshi, this book is great for evaluating your progress.

For GK, go through newspaper such as The Hindu or The Indian Express for dynamic part, you can also go through monthly magazines such as Pratiyogita Darpan and static part you may refer Lucent's GK or there are sites such as Jagran Josh, GKToday which you can use.

For Reasoning, you can use Analytical Reasoning by MK Pandey or Verbal and Non-verbal reasoning by RK Agarwal.

For Mathematics, you can go through NCERT books for foundation, and any of the among RK Agarwal's Quantitative Aptitude, M Tyra's Magical Maths.

Check out sample paper at https://law.careers360.com/download/ailet-sample-papers-previous-years

There are total 123 seats in AILET, you can see the detailed distribution at https://nludelhi.ac.in/adm-ba.aspx

Here are few tips for preparation you must follow to get a good score without coaching:-

English: Vocabulary questions will be asked. Word Power Made Easy is the book you can use to improve your vocabulary.

latest date of ailet (Nlu) llm entrance exam of 2020 is extended to june 30 Or not? one more thing who to prepare administration law for this entrance exam

AILET has extended the window to fill the registration forms from 15th May 2020 to 30th June 2020 and the exam will be conducted in August.

To prepare for the exam, you must follow some tips such as

Prepare short notes of topics and revise them regularly.

For more information you can go through this link

can I use photocopy of my caste certificate in filling application form of AILET?