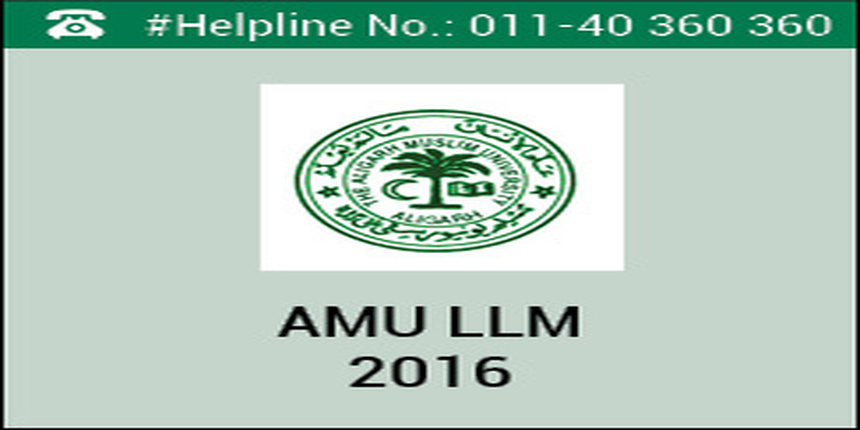 AMU LLM 2016 – Aligarh Muslim University has conducted AMU LLM 2016 on April 24, 2016 for admission to post graduate law programmes at the university. Candidates seeking admission to LLM programme of the university can check here information on Aligarh Muslim University LLM 2016 including important dates, application procedure; admit card as well as exam pattern and results below in this page.

AMU LLM 2016 Application Form – Aligarh Muslim University has begun application procedure of AMU LLM 2016 from January 12. The candidates who wish to appear in the university level entrance exam must apply before last date of application with the official link provided here. You are advised to go through the instructions before filling in the application form of AMU LLM 2016, as application fee once remitted won’t be refunded in case application is rejected due to incomplete/wrong information.

AMU LLM 2016 Admit Card – Applicants could download the admit card of AMU LLM 2016 at least 2 days before the exam i.e. by April 22. Aligarh Muslim University has notified that no admit card was to be sent by post and only online mode was available to obtain the hall ticket of AMU LLM 2016. The admit card could be downloaded on providing your application number and password/ Date of Birth as registered for AMU LLM 2016.

AMU LLM 2016 Results – The candidates who appeared for the university level entrance exam are shortlisted on the basis of merit as per the results of AMU LLM 2016 announced on June 3. Candidates can check AMU LLM 2016 result to know their qualifying status in online mode only through the official window available here.

AMU LLM 2016 Counselling – The University has released the merit list and waiting list on the notice board of the university as well as online on the official website. The university has notified that no other source of intimation will be used to alert the shortlisted candidates.

I have scored 159 marks in Allahabad University m.com entrance cut off is 144. Can I get admission in campus ?

Yes, seems like you have good chances to get admission in Allahabad University with 159 marks. I would advice you to enroll up in the counselling process so that you get your desired course and seat. I hope this information was helpful to you!

I wish you all the very best for your future!

You can apply. As per the eligibility you should have a graduation degree from any University recognized by U.G.C.with at least 45% marks in the aggregate. There is no age bar to appear in Allahabad University LLM programme. You can also refer the below given article for the further information.

To appear in LLM entrance exam, you need to have scored at least 50% in your graduation. So, Yes you can appear in the exam.

I have scored 123.5 marks can I get admission in AU. Plzzz tell me

THANKS FOR ASKING THIS  QUESTION ....BUT PLZ SPECIFY YOUR CATEGORY AND WHICH COURSE U R APPLYING FOR??? BUT IF U R TALKING ABOUT LFAT 2018 THEN ,

LET ME TELL U IF U R FROM GENERAL CATEGORY U HAVE ALLMOST NO CHANCE OR JUST A MERACAL CAN SAVE U IF CUTTOFF FALLS TO BE THERE  120 OR SOOO,,,..BUT IF U R FROM OBC OR SC ,ST THEN U HAVE 80%-TO 90% CHANCE TO GET SELECTED ....MY PREDICTIONS ARE BASED ON PREVIOUS YEAR CUTTOFFS...

ALL THE BEST FOR YOUR RESULTS ...

Llm cut off of allahabad university

i am providing you thge direct link for teh cut off of allahabad university . just open the link and you will be reditrected to the merit cut off list. all the best have agreat future ahead.

Your AMU Entrance Test brochure has been successfully mailed to your registered email id .