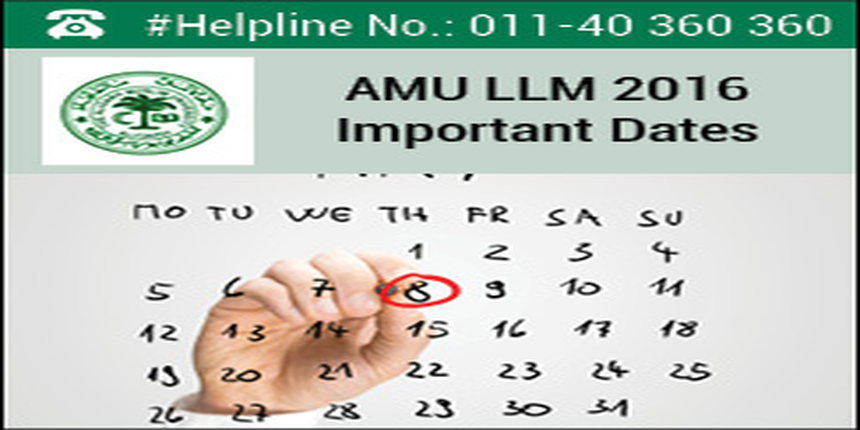 AMU LLM 2016 Applications – Candidates who want to appear in the university level law exam could apply in online mode from January 15, 2016.

Stay tuned to law.careers360.com  for more news and articles on AMU LLM 2016

I have scored 159 marks in Allahabad University m.com entrance cut off is 144. Can I get admission in campus ?

Yes, seems like you have good chances to get admission in Allahabad University with 159 marks. I would advice you to enroll up in the counselling process so that you get your desired course and seat. I hope this information was helpful to you!

I wish you all the very best for your future!

You can apply. As per the eligibility you should have a graduation degree from any University recognized by U.G.C.with at least 45% marks in the aggregate. There is no age bar to appear in Allahabad University LLM programme. You can also refer the below given article for the further information.

To appear in LLM entrance exam, you need to have scored at least 50% in your graduation. So, Yes you can appear in the exam.

I have scored 123.5 marks can I get admission in AU. Plzzz tell me

THANKS FOR ASKING THIS  QUESTION ....BUT PLZ SPECIFY YOUR CATEGORY AND WHICH COURSE U R APPLYING FOR??? BUT IF U R TALKING ABOUT LFAT 2018 THEN ,

LET ME TELL U IF U R FROM GENERAL CATEGORY U HAVE ALLMOST NO CHANCE OR JUST A MERACAL CAN SAVE U IF CUTTOFF FALLS TO BE THERE  120 OR SOOO,,,..BUT IF U R FROM OBC OR SC ,ST THEN U HAVE 80%-TO 90% CHANCE TO GET SELECTED ....MY PREDICTIONS ARE BASED ON PREVIOUS YEAR CUTTOFFS...

ALL THE BEST FOR YOUR RESULTS ...

Llm cut off of allahabad university

i am providing you thge direct link for teh cut off of allahabad university . just open the link and you will be reditrected to the merit cut off list. all the best have agreat future ahead.

Your AMU Entrance Test brochure has been successfully mailed to your registered email id .