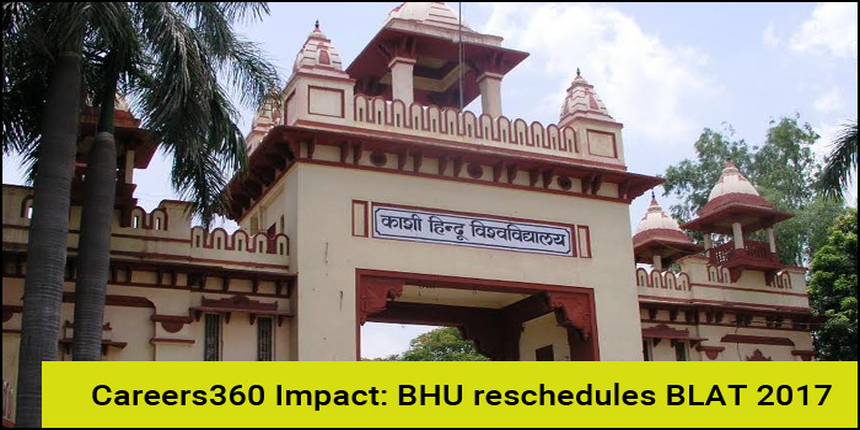 BLAT 2017, the law entrance examination for BA LLB programmes in BHU which was earlier scheduled to be held on same date as chosen by CLAT Committee, has been rescheduled. The new date of May 17 will now make it possible for thousands of law aspirants to appear for both the law entrances of national importance. Earlier, the BLAT 2017 exam was announced on May 14 which was already announced as the exam date for national level law entrance exam CLAT 2017.

The decision to change the exam date was taken by BHU officials on February 16. After the BLAT 2017 exam date was announced on February 3, Careers360 had written to BHU officials, apprising them of students’ concern towards the clashing of the two important exams. After official deliberations on the issue, the BHU officials have now informed Careers360 that the BA LLB entrance test of Banaras Hindu University (BHU) has been rescheduled and it will now be conducted on May 17 and not on the earlier date of May 14, 2017.

The Common Law Admission Test date however remains unchanged, and shall be held on May 14, 2017.

Earlier both the exam conducting bodies (BHU on behalf of BLAT 2017 and CNLU Patna on behalf of CLAT Committee) had announced to conduct their respective law entrance examinations on May 14, 2017. While Chanakya National Law University Patna, which is the exam conducting body for CLAT this year, had announced CLAT 2017 on December 25, 2016, BHU announced BLAT 2017 on the same date on February 2, making it impossible for law aspirants to appear for both the law entrance examinations on the same date, though scheduled in different time slots.

The clash of examination dates had left thousands of law aspirants confused as they landed in dilemma on choosing one of the two exams.

Although the number of seats offered through BLAT is less in comparison to those 2310 offered through CLAT, yet the BHU administered BA LLB admission test is considered one of the most coveted national-level law entrance examinations appeared by thousands of law aspirants. CLAT 2017 is being conducted on May 14 for admissions to the five-year integrated law programmes offered at 18 National Law Universities (NLUs) including Maharashtra National Law University Nagpur that joined the CLAT Committee this year. Whereas, BLAT 2017 will be conducted on May 17 for admissions to 60 seats on offer.

Stay tuned to law.careers360.com for more news and articles on BLAT

How to prepare for BHU LLB

How to prepare for BHU LLB 2020 will help you know about preparation tips, tricks, syllabus, ques...

How to prepare for BLAT 2020 will include subject wise preparation tips, strategy, exam pattern a...

when the bhu agriculture ug exam will going to held

BHU UET examination will held on 13 May 2020 tentatively in both online and offline mode. Registration process shall start from 10 February 2020 and candidates will be eligible to register themselves till second week of  March.
http://university.careers360.com/articles/bhu-uet-important-dates
Read More
Answer
Answer Later
Report
54 Views

There is no any particular books or syllabus so it is advisable to revise what you have studied in your class 12th and apart from that you can go for sample and previous year papers as these would be helping you to know the difficulty level along with the paper pattern as well.

You can download the sample papers with the given below link.

it is nice to hear your desire to join in the BHU main campus, that's great and coming to the cutoff marks for general category in BHU uet in BSC biological science is 92 marks and if you gain 400 marks then you has a chance to get into the main campus.

here is the link for your further reference:

NCERT textbooks can prove to be beneficial for the UET exam. The major concepts which are asked in the exam can be covered through it. However,  for the exam practice,  various sample papers can help in building strategies for the exam. More and more questions help in thinking about the concepts and applying them with speed and accuracy. Building up accuracy will surely fetch a perfect score.

can I give bhu uet exam in West Bengal??

View All Questions
Have a question related to BHU UET ?

Your BHU UET brochure has been successfully mailed to your registered email id .