In an Open Letter addressed to Consortium of National Law Universities (NLUs Consortium) Careers360 seeks inputs on the ‘inequitable’ CLAT 2019 application fees being charged by the Below Poverty Line (BPL) category candidates.

After the decision of the CLAT Permanent Secretariat, a pseudo-permanent body for conducting the Common Law Admission Test in offline mode, the stakeholders including law aspirants, academicians and law schools even the NLUs themselves might have sighed relief. 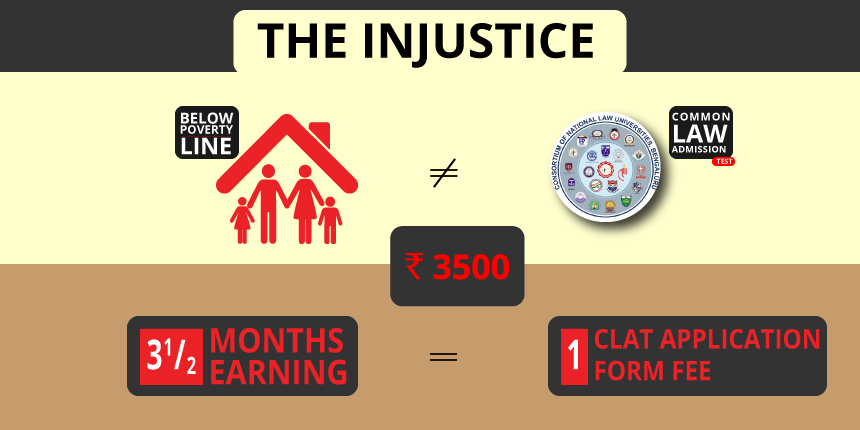 However, this historic decision of re-orienting the examination mode could not put a full-stop on the trending fails of the most-sought after national-level law examination. Even as it has put itself into yet another one of the biggest controversies, when the Consortium of NLUs published an official notification on CLAT 2019 application form stating that a BPL category candidate will need to pay Rs. 3500 as application fees. The same amount is to be paid by a candidate belonging to the Scheduled Caste or Scheduled Tribe, else all other candidates need to pay Rs. 4000 for the same CLAT application form.

An Open Letter to NLU Consortium

I would like to draw your attention towards the un-noticed situation where the Consortium of NLUs, the official conducting body of Common Law Admission Test is charging a Below Poverty Line category candidate as much as Rs.3500 as CLAT 2019 application fee.

Careers360 believes that Rs.3500 is a hefty amount which cannot be afforded by the BPL category CLAT aspirants.

Before explaining how, let us go through some interesting facts and figures of the BPL category.

Below Poverty Line in Statistics

The Suresh Tendulkar Committee (2005), which was responsible for studying the portion of the population that lived below the poverty line (BPL) in November 2009 had submitted its report. The committee in the report had devised a new method of calculating the poverty line based on per capita consumption expenditure per month or day.

Further, according to the latest data on Government records, which however is dated back to 2015, as many as 176 million people are under the National Poverty Line, which constituted to 21.9% of the total Indian population.

Breaking this number further, the Poverty Estimates functioning under Niti Aayog (erstwhile Planning Commission), as much as 25.7 percent were located in urban areas and another 13.7% in rural areas.

There are three major questions rising of the ‘inequitable’ CLAT 2019 application fee.

2.    Why did not the Consortium of NLUs (CLAT 2019 conducting authority) realize the situation that how can a BPL family who barely affords to earn Rs.33 per day, amounting to Rs.1000 a month can afford to pay Rs.3500 for a CLAT 2019 application fee? This means that a BPL family has to save their complete earnings of three and a half months to pay an application fee of CLAT 2019 for its ward.

3.    Why can’t CLAT exempt the BPL category candidates from paying application fee like NLU Delhi does for AILET application form?

Sir! Will you rise up to address the issue? Or will you let such questions come up in the name of institutional and examination set up costs? Don’t you think the exemption of CLAT fees for the aforesaid ‘unprivileged’ category is the much needed justice?

We hope you make the right call!