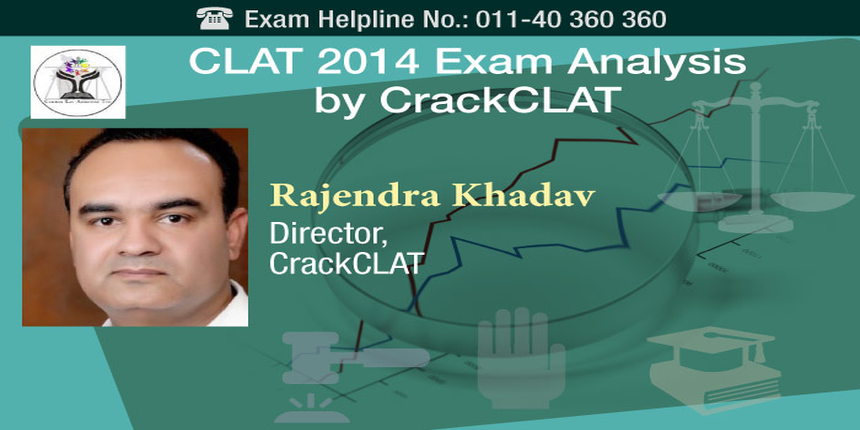 CLAT 2014 Analysis by CrackCLAT
– The Common Law Admission Test, CLAT 2014 was held at various centres across the country by Gujarat National Law University on May 11, 2014. The most coveted law entrance exam was conducted for admissions to the five year integrated BA LLB programme offered by the 14 participating National Law Universities.

Below is the excerpt of the interview –

Careers360: What is your overall analysis of CLAT 2014?
Rajendra Khadav: CLAT 2014 was overall a moderate one with no variations form CLAT 2013. Those who were updated with the current affairs and have followed and practiced last years’ question papers would have done good.

Careers360: Share section wise analysis of the paper.
Rajendra Khadav: There were five sections and the analysis is as follows –

Legal Reasoning: This portion was also easy. There were only legal reasoning type questions and no legal knowledge questions. The questions were easy as compared to CLAT 2013.

General Knowledge: This section had lots of current affairs questions and some of the static questions. The current affairs comprised past one year happenings. Interestingly there were such fresh questions like, current CJI, current ECI, SBI Head? Who won the Nobel Prize for Literature? Who won Dada Saheb Phalke Award? Questions also covered current issues like Lok Sabha Elections, 7th Pay Commissions, etc. Those who have read the newspaper daily and were in habit of news channels would have performed very well in thi section and wold have bagged full marks.

Maths: It was also an easy one. All questions were feasible and comprised numerical ability questions.

Careers360: What according to you is the expected cutoff for CLAT 2014?
Rajendra Khadav: I expect that CLAT 2014 cutoff would reach 115+ for General category.

You can check the answer key of the CLAT 2014, once it is available. The result for CLAT 2014 is expected to be out by May 31, 2014. Those who will qualify the law entrance exam and meet the CLAT 2014 cutoff can expect to be admitted to one among the participating National Law Universities.

CLAT 2014- No surprises for law aspirants

Stay tuned to law.careers360.com for more news and feature articles on CLAT 2014 Exam.