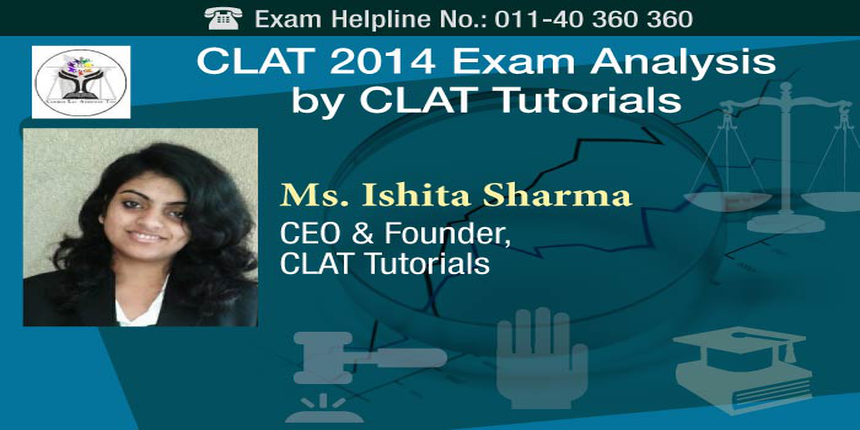 CLAT 2014 Exam Analysis by CLAT Tutorials –
The Common Law Admission Test (CLAT) 2014 administered by Gujarat National Law University (GNLU) was held on May 11, 2014. The most sought after law entrance exam was conducted at various examination centres across India for admissions to five-year integrated BA LLB programmes in the participating National Law Universities.

Ishita: The examination went smooth for most of the students this time. It was declared as the easiest CLAT exam so far by many aspirants. Overall the paper was between easy to moderate. Most of the students were happy and satisfied by their performance.

Careers360: Can you give us a section wise analysis of the paper?

Ishita: Paper was obvious without any great surprises. There was nothing unexpected except in the General Knowledge section, which had equal shares of static G.K and current affairs questions unlike previous years where the section was dominated by current affairs. This section was similar to the AILET pattern and many students would not have been prepared as it slightly increased the difficulty level. Questions like “MalalaYousafzai is a national of which country?  Who was awarded the DadasahebPhalke award this year?” were asked from current news whereas “Who was the first Jnanpith awardee? Which planet has maximum number of natural satellites? Were asked in the static G.K section although none of them were difficult or unpredictable.  In total, this section can be called moderate but for serious students it was a child’s play. An ideal score would be around 38 in this section.

English section was simple and easy for many students. One reading comprehension based on higher education was asked which was followed by ten sub-questions.  Para-jumbles were little tricky but students should have been easily glided through rest of the paper which consisted of grammar and vocabulary. Thus was another easy section with an average score upto 33.

Logical reasoning was simple unlike other law entrance examinations this year. Most of the questions could be answered easily in less time except certain arrangements and one blood relation question. This question took on to the nerves of most of the students as no one could solve it even after reading it several times. It can be concluded that the question was wrong and students might get the benefit of doubt here. A moderate section with a score possibility between 30-35.

Legal Reasoning was easier than expected. It consisted of all reasoning questions and no legal knowledge question was asked unlike CLAT 2012 where a heavy percentage of legal knowledge questions were seen. Questions asked on contracts were lengthy and took time. Principles stated were longer than the questions asked and took time to be understood by the students. Overall this section was a little lengthy but not so complicated. Average score here should be up to 43.

Mathematics section was easy as described by most candidates. Basic elementary mathematics were asked. Questions related to age, ratio, volume, percentage, simple interest and compound interest were asked which most students could solve effortlessly. A not-so-tricky section. Average score here would go upto 15.

Ishita: Since, it was an easy paper for most of the candidates, Cutoff might be high. My prediction rests between 128-133 this time.