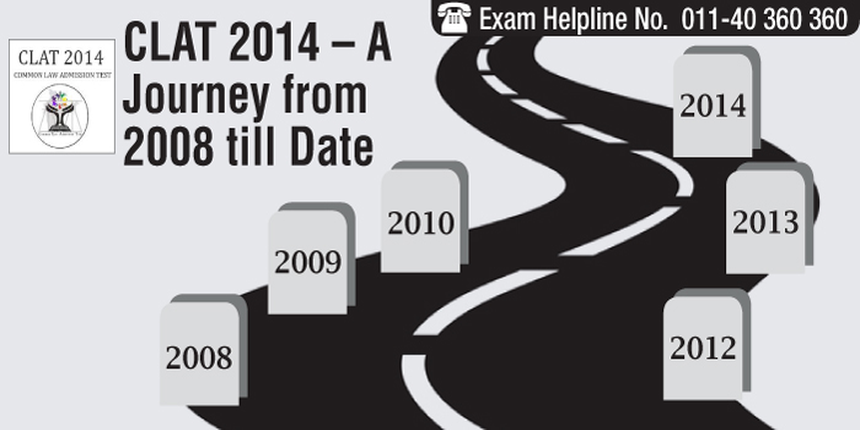 Common Law Admission Test commonly known as CLAT is the most coveted entrance exam for law aspirants. CLAT scores are received by 14 National Law Universities (NLUs). In other words the CLAT test takers based upon their performance and ranks secure to get the seat in one of these 14 NLUs. Check here for comprehensive list of Participating Institutes of CLAT 2014.

CLAT 2014 Co-Convener, Dr. Thomas Mathew expects that this year CLAT registrations will be reaching around 35,000. Every year the registrations reach a new number breaking previous year’s mark, which shows that there is a significant rise in the number of law aspirants.

Careers360 bring you Journey to CLAT 2014. Journey to CLAT 2014 is a brief about the most coveted law entrance exam, since its inception till today. Read here the circumstances which made it to set up CLAT committee and the achievements of it from 2008 till date.

Journey of CLAT began from May 2008, when for the first time the Common Law Admission Test was conducted on May 11, 2008 by NLSIU, Bangalore. In 2008, a total number of 1037 seats from the seven colleges were offered to be filled for the first time.

What was before CLAT?

CLAT was introduced in 2008. What was before CLAT? Before the introduction of CLAT, the law colleges in India conducted their own entrance examinations. The law aspirants had to take each of these exams separately in order to secure a position in the respective colleges. Thereby this caused more of a pressure to the law test takers rather than taking it as an opportunity applying for carious law colleges. Moreover there was always a fear of missing out the entrance tests for one or more colleges.

One such aspirant, Varun Bhagat filed a PIL (Public Interest Litigation) against the Union of India and various NLUs in the year 2006 in the apex court. The PIL filed in the Supreme Court of India gained motion when the Chief Justice of India directed the Government of India (Ministry of Human Resources Development) and UGC (University Grants Commission) to consult with the NLUs to formulate a common law test. It was the result of the directions, that finally after such meetings between the NLUS and the Government of India, on November 23, 2007; a Memorandum of Understanding (MoU) was signed by the Vice Chancellors of the seven NLUs to conduct a Common Law Admission Test, which was known as CLAT. This is how CLAT was born.

Joining of NLUs in CLAT Committee

Register now for expert support and guidance for application form filling, exam preparation and choosing right college that you deserve. Register now for Rs 999 only and save Rs 1396/-!

CLAT Registrations made so far

In addition to the 14 National Law Universities, the following are some of the other institutes which will be participating in CLAT 2014 Counselling.

The above listed colleges accept the CLAT 2014 score cards for taking admissions to various law courses.

The first CLAT Committee comprised of Vice Chancellors of the first seven NLUs who participated in signing the MoUs. It was decided that every year CLAT would be conducted by the NLUs in rotation and the turns of the NLUs would be decided on the basis of the years of establishment.

Thereby, the CLAT has been conducted by the following NLUs in rotation –

CLAT 2011 – The law aspirants were disappointed with the standard of the examination. Moreover some of the answers of various questions were even underlined due to the negligence of the organizers.

CLAT 2012 – National Law University, Jodhpur had conducted the exam and this year CLAT was marred by several controversies. The test takers alleged that the several of the questions were set out of syllabus and the pattern was entirely changed. Moreover errors crept in the published rank list and a fresh rank list was put up in place of the wrong one.

CLAT 2013 – When CLAT 2013 was conducted by Hidayatullah National Law University, Raipur; the test takers got surprised with the introduction of the new marking system. As per the negative marking system, for every wrong answer, a deduction of 0.25 marks (one-fourth) was made from the total marks secured by the examinee.

CLAT 2014 – This year CLAT is being conducted by Gujarat National Law University on May 11, 2014. CLAT 2014 has introduced Online Counselling.

As CLAT Co-Convener, Dr. Thomas Mathew says, “With the introduction of online counselling from this year, students will be able to choose their preference of the university only after they’ve taken the exam. They will be able to select the appropriate NLU based on their performance.”

Despite being a Common Law Admission Test and efforts made by the Ministry of Human Resources Development, yet several premier law institutions haven’t shown any interest in participating in CLAT. Some of these are –