CLAT 2014 Results: Where did it go wrong 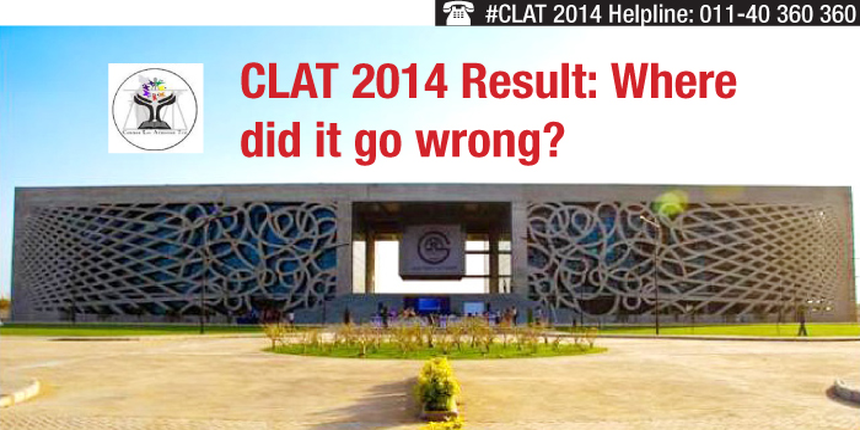 CLAT 2014 Results have been withheld till further notice from GNLU. Though GNLU, which conducted CLAT on behalf of 14 participating NLU’s,admitted that some of the CLAT 2014 takers were inappropriately placed in the merit list, after many students reported significant gap in their expected and actual scores.

After the results were declared on May 31, many candidates had alleged wrong evaluation and filed complaint with GNLU in this regard. In an apparent acknowledgment to the pouring complaints, the CLAT Committee (GNLU) has withheld the results till further notice.

Careers360 talked to some of the CLAT 2014 test-takers and law entrance exam experts on what went wrong with their scores. Scroll below to read what they said.

Kunal Rathore who took CLAT 2014 in Udaipur found his scores beyond imagination. He said that there was a huge difference between what he expected and what his actual score card showed.

Another test-taker from Patna, Anshul Anand told that he was expecting around 100 but he got just 32. On the contrary, Aman form Jaipur was expecting just around 125 but he he got 160. Aman wished that when GNLU again publishes the results, may his marks remain the same.

NALSAR, Hyderabad aspirant Shreya who took CLAT 2014, was also disappointed with ther scores. She said, “As per official answer key uploaded by GNLU, I calculated my scores and it was around 130 but when I got my result it showed a big gap between my actual and expected scores. I wish that GNLU takes time and uploads the correct results.”

Another ambitious candidate, Sudarshana from Cuttack told that she expected 132 as her total marks in CLAT 2014 but she got only 120. “My expected result would have put me somewhere between 600 and 650 ranks as per last year’s cutoff. But when the result came, my rank was below 1500. The decision of GNLU withholding the results came as a sigh of relief to me. Now, I hope that errors in the results will be rectified,” she added.

The university had withheld CLAT 2014 Results hours after announcing it owing to ‘technical discrepancies’ even as many CLAT takers alleged that wrong evaluation brought them shocking scores after the results were announced late night on May 31, 2014.

Careers360 also took insights of the law entrance experts on the wrong evaluation of CLAT 2014.

Amandeep Rajgotra from Career Launcher while talking to Careers360 said that no one has expected such a big mistake this year in CLAT 2014. CLAT being the national exam for law entrance has more aspirants than any other law exams in India and mistakes like this can ruin the reputation of the conducting body. “The students did complain about their marks. They complained that the marks which they got were not what they expected. There was a big difference between the expectations and what they actually got.” He further said that the difference of just 2-3 marks could have been neglected but when they got complains about the big differences of 20-25 marks; they felt that there was something fishy. “I wish GNLU publishes the result as soon as possible so that the candidates could get their actual rank and marks. Due to this result even the counselling of CLAT 2014 has been put to hold,” he concluded.

Rajendra Khadav, Director, CrackCLAT also said that it was a serious issue and could have been avoided. He commented, “Some of my students also complained that that there was a difference of as much as 30 marks in expected and actual scores.” He advocated GNLU decision to withheld the result of CLAT 2014. “I wish GNLU put a solution to this problem at the earliest.”

Harsh Gagrani, Director of LegalEdge Tutorials said that the delayed results might create trouble as AILET 2014 counselling procedure for admission to National Law University, Delhi also begins from June 13. He suggested that a permanent exam conducting body should be constituted to avoid such problems.

CLAT 2014 – CLAT Results were withheld due to technical discrepancies and wrong scores. CLAT Online Counselling scheduled to begin from June 1 affected. CLAT 2014 was conducted by GNLU.

CLAT 2013 –In a surprising move, negative marking system launched with a deduction of 0.25 marks (one-fourth) for each wrong answer. CLAT 2013 was conducted by Hidayatullah National Law University, Raipur.

CLAT 2012 – National Law University, Jodhpur had conducted the exam which was marred by several controversies. The test takers alleged that the several of the questions were out of syllabus and the pattern was entirely changed. Moreover errors crept in when rank list was published.

CLAT 2011 – The law aspirants were disappointed with the standard of the examination. Answers to many questions were underlined due to the negligence of the organizers.

CLAT 2008 – Common Law Admission Test, one common exam for law aspirants was launched despite a section opposing the move.

CLAT 2014, the national level law entrance exam was held on May 11 in 21 examination centers in India for admissions to 1660 BA LLB seats across 14 participating NLUs.

GNLU had also announced CLAT 2014 Counselling from June 1, 2014. As a result of the new development on CLAT results, the counseling procedure will automatically get disrupted and it is likely to be re-scheduling in next few days.

If you have any queries for this news or you wish to comment, please post below the article.