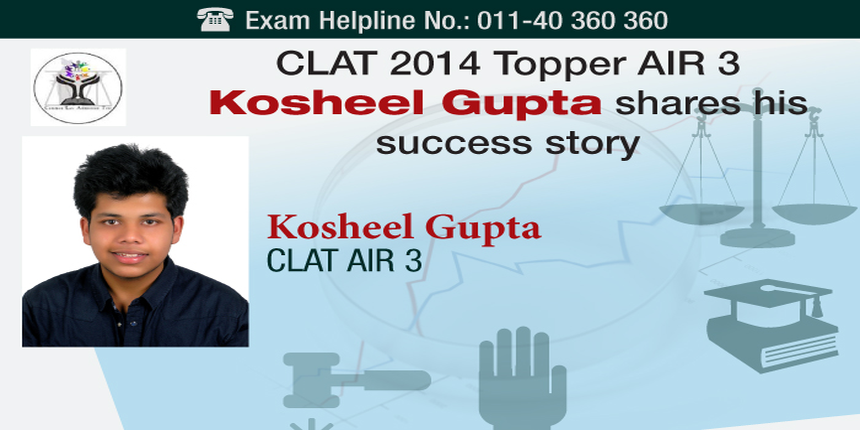 Calm, Composed and a guitarist by hobby, Kosheel Gupta followed one simple strategy and achieved All India Rank 3 in CLAT 2014. In an interview with Urvashi Dalal of Careers360, Kosheel Gupta unveils the secret to top in the most coveted law entrance exam, CLAT.

He shares that walking along in his father’s office, a lawyerinspired him to become a lawyer too. Watching television shows that teach him all the tact’s and tricks of ‘how to be a successful lawyer’, Kosheel bagged AIR 3 in CLAT 2014 with a score of 170.25 out of 200.

In his interview with Careers360, Kosheel mentioned that ‘going easy’ is the best way to crack any examination. If a student is confident about his hard work and preparation, he can achieve anything they want.

Careers360 interviewed the CLAT 2014 Topper and brings the insights that can guide you on how to crack CLAT. Read below the excerpt of candid interview of CLAT 2014 AIR 3 Kosheel Gupta –

Careers360: Congratulations Kosheel on achieving 3rd rank in CLAT.
Kosheel:  Thank you. Yes it’s great. It’s an amazing feeling, it was unexpected. But when I saw the CLAT 2014 official Answer Key, I thought that I might score good.

Careers360: You must be getting applauds from your relatives and friends. You fulfilled their expectations well.
Kosheel: My family, relatives and friends are way too happy. My father, who is a lawyer was my inspiration and yes they all supported me throughout my preparation.

Careers360: That is a great score. How did you prepare for the examination? What was your preparation strategy?
Kosheel: The only strategy I adopted was to stay relaxed, go easy, be confident and manage the time well in the exam. I believed in my hard work and had confidence in my preparation.

Careers360: Confidence really helps you to achieve any mile stone. But you might have divided your study hours, how much time you devoted towards your study?
Kosheel: There was no time planning as such. I just planned my sessions and topics. I took some hours in the beginning to plan strategically regarding what to study and stick to my plan until I finished it.

Careers360: Really, just planning topics helped you?
Kosheel: Yes, indeed, I just focused on finishing topics as per my plan rather than sticking to time. Covering each topic is important, compared to just stick to strict time schedule.

Careers360: How did you balance your studies and other activities?
Kosheel: Well, it was easy. I love playing guitar. Music helped me a lot to keep my calm. I was also equally active on social sites including FB. I usually played badminton. Other extra activities are equally important. You can’t just sit in a room and lock yourself in a room aloof from the world. Sometimes with the world, you start learning.

Careers360: Now you have begged AIR 3 in CLAT 2014. What now?
Kosheel: I have aimed for National Law School of India University (NLSIU), Bangalore. After having my degree from there, I would be able to plan further, what I choose to be.

Careers360: Kosheel as future aspirants for CLAT would require guidance from toppers like you. Share some of your insights with them.
Kosheel: I would like to share the three basic points, be confident, relax and believe in your hard work. Also, I would ask them to abstain from any last minute preparations, as it is very much important to stay calm and relaxed just before the examination. My good wishes are with all CLAT 2015 aspirants. Be what you are. Please always believe that you have practiced well and shall do justice to your preparation.

Careers360: It is so great to have this conversation with you, your thoughts and insights would be valuable to CLAT 2014 aspirants. We wish you good luck for your future endeavors.
Kosheel: Thank you so much! It has been an opportunity for me.