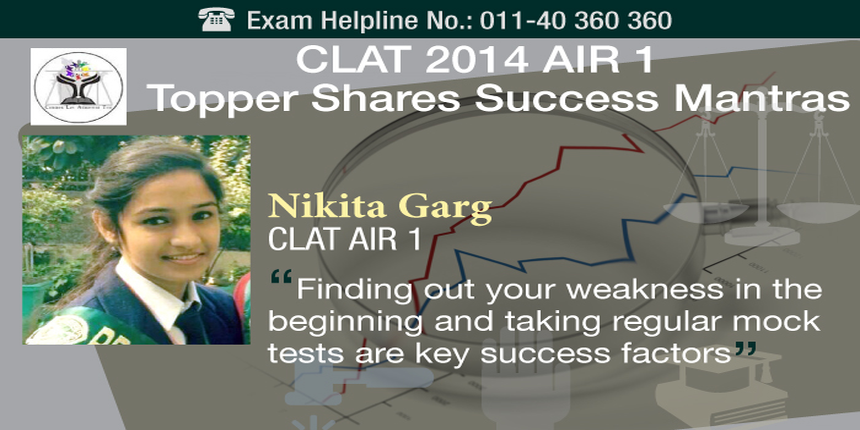 Nikita Garg, who obtained Rank 1 in the Common Law Admission Test (CLAT) 2014 outsmarted about 30,000 candidates by her performance. CLAT 2014, conducted by Gujarat National Law University (GNLU) is a highly competitive test of national level. Cracking the exam opens the gateway for admission in the National Law Universities (NLUs) in India. How much was the hard work behind this success? To know the mantras of success, Careers360 spoke to Nikita Garg, CLAT 2014 topper. Read the exclusive interview of CLAT 2014 topper Nikita Garg to know more about her success strategy and a glimpse of her interest apart from studies.

A trained Kathak dancer, for whom dance is not just a hobby but passion and recreation as well, Nikita hails from Noida. A pass out from Delhi Public School (DPS) RK Puram, Delhi, Nikita scored 10 CGPA in her Class X board exams and over 96% in Class XII from Commerce stream. Being the only sister of 2 elder brothers, Nikita dotes on her family and owes her success largely to them.

Careers360: Congrats on your success at CLAT 2014! Were you expecting it?

Nikita Garg: Thank you! Of course it is not possible to expect in advance that I would top the exam. However, I was sure that I would obtain a high rank as I performed really well in the exam. It’s quite an unbelievable feat for me and the feeling is amazing.

Careers360: What are the factors which attributed to your success?

Nikita Garg: There are a number of factors which played a crucial role for me in my success in CLAT 2014. A rigorous study, family, teachers from coaching institutes and my school are few factors which I can attribute for my success. My elder brothers, both pass outs from IITs have helped me a lot in guiding me about tackling entrance exams in objective and multiple choice question pattern.

Careers360: Did you take any other Law entrance exam?

Nikita Garg: Yes, apart from CLAT, I appeared for AILET and IPU CET Law entrance exams. My score in AILET was 102.

Careers360: How and why did you decide to take up law as a career?

Nikita Garg: Since I am from Commerce background, law seemed to be the most appropriate career path for me.  I decided to take the law entrance exams in Class XI and started preparation from Class XII by joining coaching institute.

Careers360: What was your preparation strategy?

Nikita Garg: I followed a step by step preparation methodology for CLAT. The first step was to join a coaching institute so that I could get proper direction. I started with initial preparation of the sections. I went through all the sections separately by following the study materials offered by my coaching institute followed by solving mock tests and past years’ papers. I did my section wise SWOT (Strength Weakness Opportunity Threat) analysis to decide the section wise approach and focused on making the weak areas stronger and making the comfortable areas better. I took regular mock tests to assess my progress.

Careers360: Which sections were your strengths and which areas gave you a tough time?

Nikita Garg: More or less I was comfortable with the sections. Since I had Mathematics and English in 10+2 level, they were relatively easy to prepare. Reasoning sections were new to me but with practice I found them convenient and easy to solve. GK is one section which you can never be sure of. I managed the section by regular reading of newspaper.

Careers360: Apart from studies, is there any recreational activity you indulge yourself to?

Nikita Garg: I love dance! I am a trained Kathak dancer. I have taken up this dance form since 11 years. Dance is not only a hobby but my passion and recreation as well.

Careers360: Which is your dream law college?

Nikita Garg: My dream institute is National Law School of India University (NLSIU) Bangalore. From the very beginning I have been aiming this Law School and it’s really wonderful to feel your dream come true.

Careers360: After completing your Law School, where do you want to see yourself after 5 years?

Nikita Garg: I think it would not be justified to make a career plan prior to getting proper domain knowledge on law which I think I would acquire after 2 years. Still, I would like make a career in the area of Litigation.

Careers360: What is your message to the aspirants who are planning to take CLAT next year?

Nikita Garg: I would like to suggest them not to take much stress related to the exam. It is not a very difficult paper and you can easily crack it if you are determined to do so. Prepare well for the GK section. Take regular mock test and identify your weaknesses and prepare accordingly. All the best!