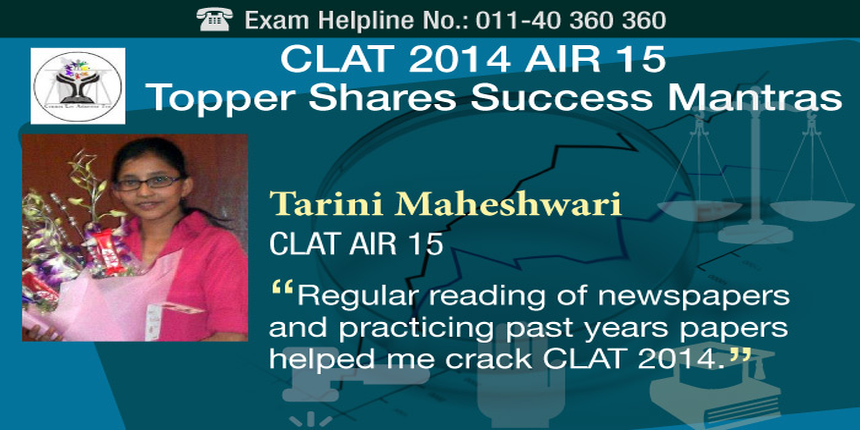 Continuing with the series of CLAT 2014 Topper Interview, Careers360 brings you the success tale of Tarini Maheshwari, AIR 15 in CLAT 2014. Shy and composed Tarini wants to make a mark for herself by following a different path. Tarini also shares her plan to start an NGO for the underprivileged children.

An avid reader and music lover, Tarini did her schooling from DAV Public School, Sreshtha Vihar. She scored 10 CGPA in CBSE Class X board exam and 96.6% in Class XII from Commerce stream. Tarini shares her preparation strategy, dreams and advice for cracking CLAT.

Read below the excerpts of the interview –

Careers360: Congratulations on obtaining 15th rank in CLAT 2014! How did you make it happen?
Tarini Maheshwari: Thank you! I think my systematic approach towards the exam, regular practice and the help and support of my teachers and family members have led to the success in CLAT 2014.

Careers360: What motivated you to pursue law as a career?
Tarini Maheshwari: I always wanted to do something different. In my family, my father is a Senior Accountant, my mother is a doctor and my brother is pursuing engineering from BITS Pilani. I wanted to tread a different path. I am thankful to my family for encouraging my decision and supporting me in every possible way. I decided to pursue law when I was in Class IX. From Class XII onwards I started full-fledged preparation.

Careers360: What was your preparation strategy? How did you balance between studying for board exam and CLAT?
Tarini Maheshwari: Frankly speaking, I started preparing for the law entrance exams after my board exam got over. I did not feel that a rigorous study regime was required since I had already taken the board exam. I made it a point to read newspaper every day, even during my boards for strengthening the GK section. Apart from that I practiced and solved past years CLAT and AILET papers provided by my coaching institute. I spent around 6 to 7 hours a day for the CLAT preparation which I believe was enough. The sections like English and Mathematics were already in my grip owing to the board exam and the Logical and Legal Reasoning sections got strengthened with regular solving of test papers.

Careers360: Apart from studies, what else do you do to unwind yourself?
Tarini Maheshwari: I like reading a lot. J K Rowling’s Harry Potter is my favourite series. Apart from that, reading newspaper every day in detail is another hobby too. Also, I don’t mind tuning myself to some good music.

Careers360: What are your dream Law institutes where you will prefer to get admission in?
Tarini Maheshwari: The institutes which I aim to join are either National Law School of India University (NLSIU) Bangalore or NALSAR University of Law, Hyderabad.

Careers360: What are your career aspirations which you would like to pursue after 5 years?
Tarini Maheshwari: I would like to join a law firm after obtaining my degree in Law. In future I aspire to open an NGO for underprivileged children and help them by fighting for their rights with the legal knowledge that I would acquire in next 5 years.

Careers360: What message would you like to share with the aspirants who would take CLAT next year?
Tarini Maheshwari: Regular and systematic approach to the exam will help the aspirants in cracking CLAT. I suggest them to make it a habit to read newspapers daily. Taking mock tests and solving past years papers will help you prepare for the exams.