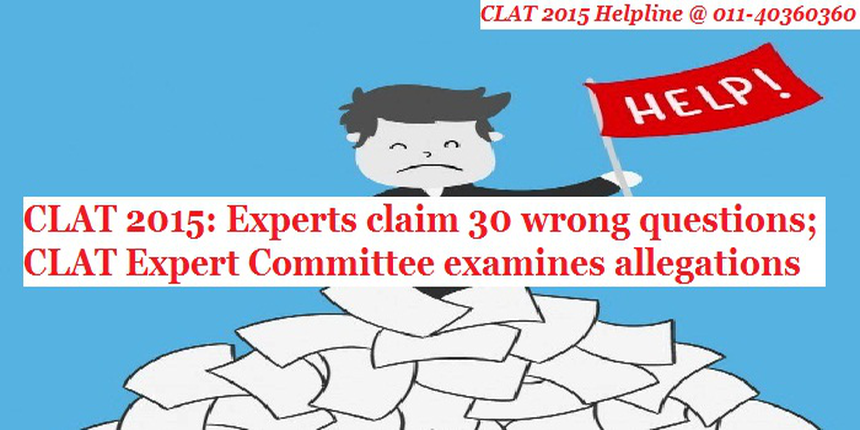 The CLAT 2015 allegations over exam and evaluation process have snowballed into a major controversy with experts claiming errors in more than 30 questions even as the first allotment list of the ongoing CLAT counselling is withheld pending special CLAT expert committee decision on the alleged discrepancies.

Ever since, the CLAT was conducted on May 10 in online mode for about 40000 candidates, the test takers have been raising doubts on accuracy of many questions and answers of CLAT 2015 paper.

Careers360 has already reported the allegations made by candidates on CLAT 2015 exam and evaluation process.

However, after the release of CLAT question paper on June 2, fresh allegations have erupted with CLAT coaching experts and students’ forum claiming 30 wrong questions in the CLAT paper.

Careers360 spoke to law entrance exam experts to find out how big is this crisis for the premier Law Entrance Exam. The domain experts have claimed as many as 30 wrong questions in CLAT 2015 online paper.

Here, we classified the claims (of experts and CLAT takers) of erroneous questions in CLAT 2015:

**The table above is based on the allegations made by the law exam experts.

This has again led RMLNLU, which conducted CLAT 2015 on behalf of 16 National Law University (NLU) across country, to form an expert committee comprising the Vice-Chancellors of four NLUs to probe into the fresh allegations. The first round of indicative seat allotment expected to be out on June 2 is also withheld pending the final view of this expert committee.

Till the expert committee submits its report, the fate of around 40000 CLAT takers hangs in balance.

The CLAT 2015 Committee has constituted an expert committee of VCs of 4 NLUs who are examining the online question paper which is alleged to have several errors. The expert committee will be coming with a decision in a day or two, clearing the confusion over the controversial row. Meanwhile, the CLAT 2015 Committee headed by RMLNLU VC, Dr. Gurpreet Singh said that all measures had been taken by the committee to ensure that the online question paper was free of errors. “I deny to the fact that there are so many errors, reportedly 30. A team of experts had designed the questions and the exam was conducted in online mode, so as to make it student friendly. Online exam means complete transparency and fairness,” the VC said.

Dr. J.D. Gangwar, CLAT 2015 Convener earlier on June 2 had told Careers360 that the CLAT 2015 committee had admitted that after uploading the questions papers and answer keys on official website, they received representations from several candidates who doubted the CLAT 2015 Answer Key accuracy. Subsequent to this, an expert committee was formed to look into this matter.

Dr. Gangwar said, “After we had received representations from CLAT 2015 test-takers, an expert committee was constituted which has checked the question papers for any error and the report will be publically available on June 6. We will do whatever should be done in the larger interest of law aspirants and to maintain the trust on CLAT.”