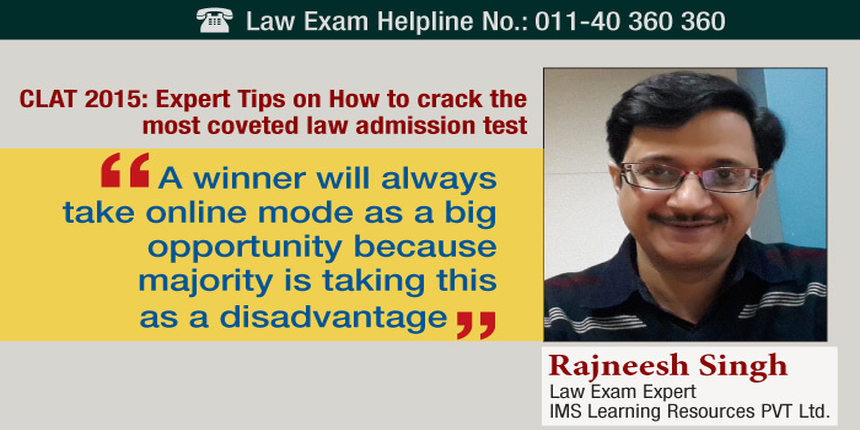 As the law admission season has begun with applications of Common law Admission Test (CLAT) commencing from Jan 1. By now, CLAT 2015 aspirants may have started preparing for the law admission test. CLAT is the most sought after law entrance exam conductedby a NLU among the 16 National Law Universities (NLUs) in rotation for as many as 2164 seats.

CLAT 2015 is scheduled for May 10, 2015. As the most coveted law entrance exam is around the corner, the exam aspirants must have begun to claim a seat in one of these participating 16 NLUs in the country. Careers360 brings you Experts tips on How to crack CLAT 2015.

In this exclusive interview, Rajneesh Singh, Law Entrance Exam Expert, IMS shares insights on CLAT 2015 which is being conducted in online mode for the first time.

He shares tips to crack the coveted law entrance exam and suggests ideas to cope out the expected problems in CLAT 2015 online. He also talks on advantages of a computer based test and difference between an online and offline test.

Read here on expert guidance on how to strategize your preparation for CLAT.

Careers360: As CLAT 2015 is approaching, how aspirants need to prepare for Online CLAT 2015?
Rajneesh Singh: CLAT is now a computer based test, it comes with its own pros and cons. We all think that giving an online exam will be difficult; this is more of a psychological thought. We are so much accustomed to paper based mode that it is really difficult to imagine a computer test. The best way to overcome this fear is to get tortured many times till you feel the comfort.

CLAT aspirantsshould take as many as possible online tests, mock tests and section tests.This will help them in improving the speed. Aspirants need to be really good and quick at the mouse movements.It is advised to play those games where mouse is used exhaustively to get a hold on the mouse.

Careers360: What are the advantages of the online exams?
Rajneesh Singh: As earlier said, we are so much accustomed to paper based mode that it seems a computer test might be difficult. But online format has its own advantages too. Such as, the sequence of attempts is decided by you and you can switch to one question from another at one click.

You can also change the answer as many times you wish before the final submission unlike in offline mode.

Careers360: What are the actual problems which aspirants may not foresee and what are the ways to overcome them?
Rajneesh Singh: According to me, there can be only two problems which aspirants can face in the computer based test. One is,quick scanning of the whole paper at one go which is not possible in online mode. Test takers often scan a part of the question paper and then decide on selecting a question to be attempted. Now this process in online exams becomes a little difficult and time consuming task.

Another problem could be the inability to do the rough work just besides the question.

Careers360: Which mode is better between online or offline modes?
Rajneesh Singh: Online test has more advantages as compared to offline test.Some of them can be are: