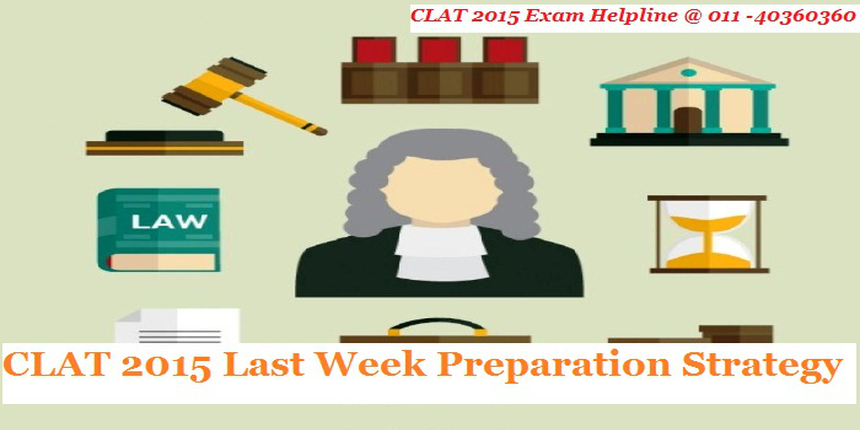 As CLAT 2015 scheduled for May 10 is barely a week more to go, aspirants will be getting ready for Last Week Preparation Module of CLAT 2015. Careers360 brings you CLAT 2015 Last Week Strategy to aid you with the expert guidance on How to strategize your CLAT 2015 preparation in the last week.

As per the official data, as many as 39686 applicants have registered for CLAT 2015.

CLAT 2015 Last Week Preparation Tips will help you in drawing an overview of the Do’s and Don’ts to be followed in last week of CLAT and the expert tips will guide you to crack CLAT 2015.

Before we begin with Last Minute Preparation Strategy for CLAT 2015, let us acquaint ourselves with CLAT 2015 Paper Pattern

CLAT 2015 Committee follows a system of negative marking wherein 0.25 marks will be deducted from the total scored marks in case of any question marked wrong. Candidates are required to choose one among the options provided against any question. If any candidate responds with more than one answer, it’ll be considered as wrong even if the one of the marked options is correct and negative marking shall be applicable to the very question.

CLAT 2015 Last Week Strategy – Aspirants would now have buckled up for Online CLAT 2015. We bring you the expert insights on Last Week Strategy for CLAT 2015, where Rajneesh Singh, CLAT Expert, IMS Learning Resources has suggested Do’s and Don’ts for the law aspirants appearing for the most sought after law entrance exam. The law exam expert has also guided the law aspirants about last week preparation strategy for CLAT 2015

Read the expert tips to crack CLAT 2015 in one week with the help of mock tests.

Careers360: What preparation strategy should CLAT 2015 aspirants adopt in the last one week?
Rajneesh Singh: The law aspirants who would be appearing for CLAT 2015 need now to take lots of section tests. I would recommend them to take the tests maintaining the time constraint. They would also need to analyze themselves well otherwise they won’t be benefitted.

It is suggested that the law aspirants must take 5 to 6 mock tests from now. A deep analysis after the tests is a must. Mock tests are the best mentor which guide you in gauging your strength and weaknesses and help you to improve further.

Careers360: How many mock tests would be necessary in the last week?
Rajneesh Singh: As CLAT 2015 is scheduled for May 10; the aspirants can go for 4 mock tests on a daily basis.

CLAT 2015 Preparation: How mock tests are important for online CLAT