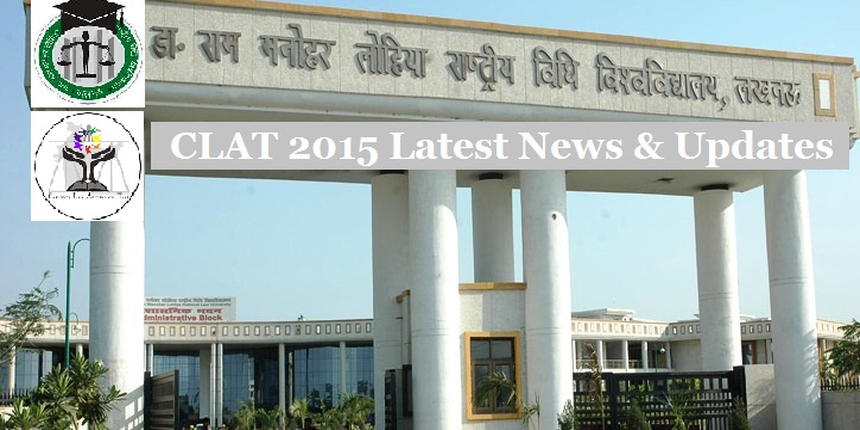 CLAT 2015 has been in multiple controversies
. The premier law entrance test for admission to 16 National Law Universities (NLUs) has been hogging media attention for different reasons. Dr. Ram Manohar Lohiya National Law University (RMLNLU) which conducted CLAT this year was also slapped with a number of court notices in different cases filed by CLAT aspirants.

Careers360 brings you Latest News & Updates on CLAT with timeline. Read here all you need to know about CLAT 2015.

Date: July 11, 2015
Rajasthan HC sends 3 more errors to CLAT 2015 Committee
The Jodhpur Bench of Rajasthan High Court following the list of 18 erroneous questions as pointed out by Bombay HC added three more questions to the list, counting it to 21. Moreover, the Expert Committee of CLAT 2015 will now have to review the 21 errors encrypted in the online question paper of May 10.

CLAT Committee releases 4th and Final Allotment List
CLAT Committee has released the 4th and Final Seat Allotment List for admissions to 2190 seats distributed among 16 NLUs.
The candidates who have found their place in 4th and final allotment list either as ‘upgraded’ candidate or as ‘newly allotted’ are directed to complete the admission formalities in their allotted Universities between July 2 and July 6, 2015.

Rajasthan HC reserves 1 seat at NLSIU Bangalore for petitioner
The Rajasthan High Court ordered that admission for the “last student” (who is apparently a Writ Petitioner at Rajasthan HC) of NLSIU Bangalore “shall be subject to the outcome of writ petition” filed in the HC.

Bombay HC seeks response from CAT 2015 Committee over 7 ‘alleged’ wrong questions
The Bombay High Court had sought clarification from CLAT 2015 Committee against the alleged seven erroneous questions in the online paper of the coveted law entrance exam.
The HC Court also said that it had received a sealed envelope containing Expert Committee’s recommendations given by RMLNLU and the same has been placed on record, after going through the recommendations.

Jabalpur HC stays NLIU Bhopal domicile seat allocation
The Jabalpur high Court stayed the demotion of as many as 15 candidates who were allotted NLIU Bhopal in the first allotment list under the Madhya Pradesh domicile category, however, were again assigned lower preference colleges in the second list.

The CLAT authorities rationalizing the change in preferences said that they intended to give admission in the domicile category horizontally and not vertically as advertised in the CLAT brochure.

The High Court also assured the petitioner that he will be admitted to the desired NLU as per the procedure, if his objections are accepted.

CLAT 2015 2nd Allotment List announced
The CLAT 2015 Committee has published the second seat allotment list for Round 2 Counselling against the 2190 seats in 16 NLUs.
The list also mentions the upgraded as well as offered seats post Round 1 of CLAT 2015 Counselling.

The CLAT committee has, however, claimed that there was some inadvertent error in fist indicative allotment and the same was rectified with change in option for a few candidates. The RMLNLU, the conducting body for CLAT, also communicated the same to the affected candidates.

The merit list of test-takers has been published after several controversies, which arose due to allegations on the examination and evaluation process.

Supreme Court disposes Writ Petition against CLAT Committee
The Supreme Court of India has disposed a writ petition filed against the CLAT 2015 Committee regarding ‘alleged 15 wrong’ questions in the online paper of the coveted law entrance exam. Interestingly, Mr. P. H. Parekh, the Counsel for Petitioner had requested the apex court to withdraw the special leave petition.

Moreover, the petitioner has been directed by the Honourable SC to approach Rajasthan HC.

Subsequent to the petition filed by CLAT taker, Rashi Mangal on June 5, the HC has sought CLAT 2015 officials’ response on the alleged wrong questions by June 17.
The petitioner has also urged for public display of CLAT 2015 Merit List of all candidates.

CLAT 2015 Committee officials, however, said that they have not yet received any notice from the Rajasthan HC.

CLAT 2015 committee revises result and ranking; 1st seat allotment on June 8
CLAT 2015 Committee has announced a revised result for UG entrance exam on the basis of an expert committee report which identified two more errors in the question paper. The newly reported errors are in addition to another erroneous question which CLAT Committee has already admitted before announcing the results.

In a press statement, the CLAT authorities said that the revised scheme is based on an expert committee finding which indicated to a few additional errors in the question paper.
Further, the CLAT committee also announced release of individual question paper to candidate log in ID.

CLAT 2015 Committee constitutes an expert bench to examine errors in CLAT 2015 paper after test-takers complained regarding the same.

CLAT 2015 Exam Experts claim 30 wrong questions; CLAT Expert Committee examines allegations
The CLAT 2015 allegations over exam and evaluation process have snowballed into a major controversy with experts claiming errors in more than 30 questions even as the first allotment list of the ongoing CLAT counselling is withheld pending special CLAT expert committee decision on the alleged discrepancies.

After the release of CLAT question paper on June 2, fresh allegations have erupted with CLAT coaching experts and students’ forum claiming 30 wrong questions in the CLAT paper.

CLAT 2015 Committee has said that the first seat allotment list has been postponed due to some technical reasons.

CLAT 2015 test takers approach HC for question paper release
CLAT 2015 test-takers approach Allahabad High Court demanding release of CLAT question papers citing discrepancies in the most coveted law entrance exam. CLAT test taker Aditya Dua along with 10 others has petitioned in the High Court seeking release of questions paper of the online entrance exam conducted on May 10. Subsequently, to the petitioned filed on May 25, the High Court of Judicature at Allahabad has also sought repsonse from Dr. Ram Manohar Lohiya National Law University in this matter within four weeks as the HC has scheduled next listing for July 9.

CLAT 2015 carried one wrong question; Test-takers get 1 bonus mark
CLAT 2015 Committee and RMLNLU clarifies that one question had a typo error, following which every test-takers were awarded one bonus marks for the same.

CLAT 2015 results announced
After CLAT 2015 results were announced on May 19 late night, the social media platform abuzzed with discrepancy in results including ranking and evaluation process.
Aakash Jain from Madhya Pradesh reportedly has bagged AIR 1 in CLAT 2015 scoring 141.25 marks out of 200.

Allahabad High Court ordered CLAT 2015 Committee to scrap upper age limit of 20 years, after a writ was petitioned in the Honourable court against the same.
The court observed  that the age limit of 20 years stated in the advertisement as well as the information brochure was "without authority of law" since there was "no provision of law which gives the university the power to fix the upper age limit.