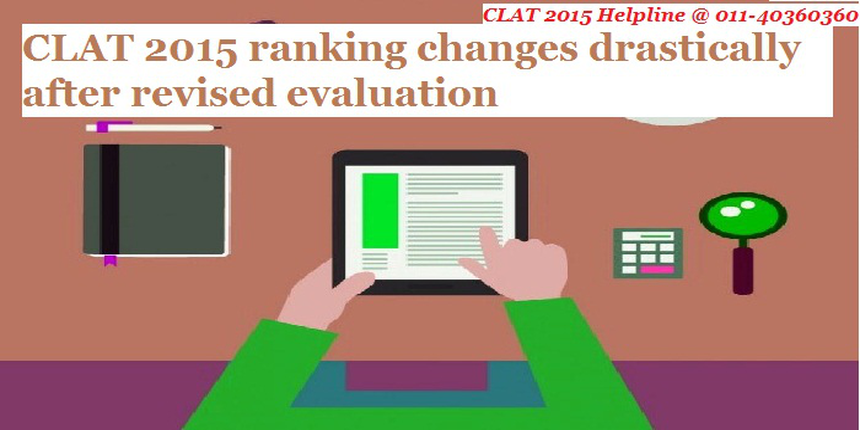 CLAT 2015 Result and ranking have changed drastically following a couple of changed evalutation measures including nullification of a question by the CLAT expert committee. The revised result has, in fact, significantly impacted the All India Ranking (AIR) with the new merit list showing many candidates sliding down or moving up by over 200 ranks.

CLAT 2015 Convener, Dr. J.D. Gangwar has confirmed to Careers360 that the expert committee, constituting VCs of 4 NLUs, had taken a decision to nullify a question with a typo error and full marks has been awarded to all candidates irrespective of their attempt to the question. Dr Gangwar also said that another question has been re-evaluated with full marks for an additional correct option. Subsequently, the re-evaluation of the merit has been done on the basis of the same. “Earlier, one of the the questions in online CLAT 2015 paper had a typo error and the same was nullified with a bonus mark to all candidates. Now, a similar error has been detected in another question. Therefore, the test-takers have now been marked for a total of 198 questions with 2 bonus marks to all candidates,” Dr. Gangwar said.

He also shared the following details on the revised marking scheme.

The CLAT Convenor said that the revised result and ranking has been announced on the basis of re-evaluation and an official communication has also been released stating the same on the CLAT 2015 website. "Seat allotment in accordance with these rank lists is likely to take place by Monday (i.e. 08.06.2015)," he added.

With the revised ranking order, many candidates have found their ranking altered by huge margins.

Here, we bring you a case where the ranking order of a candidate has changed by 210 ranks under the revised marking scheme for CLAT 2015.

Let us have a look on the after effects of CLAT 2015 re-evaluation process. The first image shows the original rank and the second shows the rank basis revised result.

CLAT conducting NLU–Dr. Ram Manohar Lohiya National Law University (RMLNLU) on June 2, had released CLAT 2015 Official Answer Key and Question Paper after a spate of allegations on exam and evaluation process of the national level law entrance exam and had admitted that after uploading the questions papers and answer keys on official website, they have received representations from several candidates who doubted the CLAT 2015 Answer Key accuracy. Subsequent to this, an expert committee was formed to look into this matter.