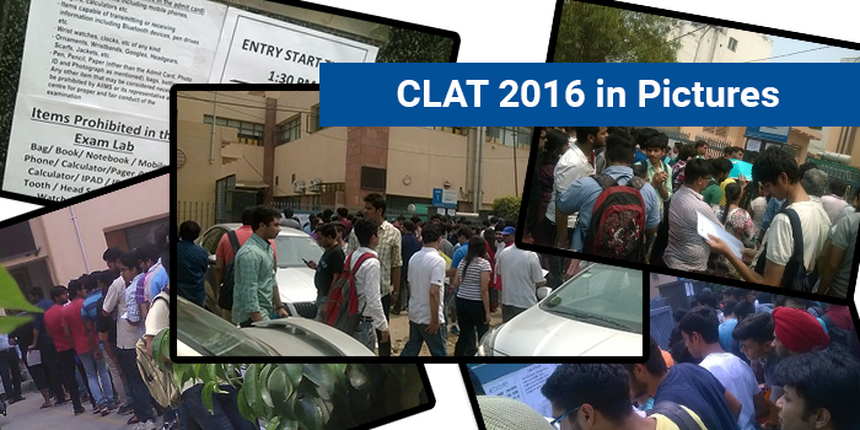 CLAT or the Common Law Admission Test was held on Sunday, May 8, 2016 across 66 test centres in India. Rajiv Gandhi National University of Law (RGNUL), Patiala is the conducting body for this year’s CLAT. Around 45,000 law aspirants are appearing for the national level law entrance exam.

Careers360 is reporting the exam live from Delhi test centre to bring to you the mood of the exam day. Take a look at the pictures from the CLAT 2016 exam centre which speak volumes about the happenings at the test venue before and after the exam.

The test centre authorities clearly stated the instructions for the exam day including the timings, valid ID proofs and other instructions.

Candidates reach the exam centre much before the scheduled time (3 pm) coping with the scorching summer heat.

While some test taker engage in discussion and anticipate question types with fellow test takers, few serious candidates seen utilizing the time before the entry by going through last minute revisions.

The test venue becomes crowded as more test takers gather outside the exam hall at 2 pm.

Test takers huddle to check the seating arrangement as per their roll number given on the CLAT 2016 Admit Card.

Amidst rush and chaos, some candidates form a queue in front of the gate, others wait for some more time before joining the line.

The rush outside the exam centre reduces as most of the candidates have already entered and the rest have also queued up.

Few late comers are seen reaching the centre after 2.45 PM, the time for the closure of the entry gates.

After much persuasion and request, the security officials allow the late comer candidate.

Late comer, who reached the centre after 2.45 PM was denied entry to the exam hall.

Candidates start coming out of the exam hall. Some of them wear a tensed expression owing to tough Maths and Logical Reasoning section.

As the exam was easy, a candidate beaming confidence outside the exam exit gate

CLAT 2016 is conducted for 2250 five-year integrated law programmes in 17 participating NLUs. The Results of CLAT 2016 will be announced on May 23, 2016 and the counselling will be held in online mode between July 1 and 6, 2016 along with the seat allotment.

Stay tuned to law.careers360.com for more news and updates on CLAT 2016.