CLAT 2016 was conducted by Rajiv Gandhi National University of Law (RGNUL) Patiala on May 8, 2016 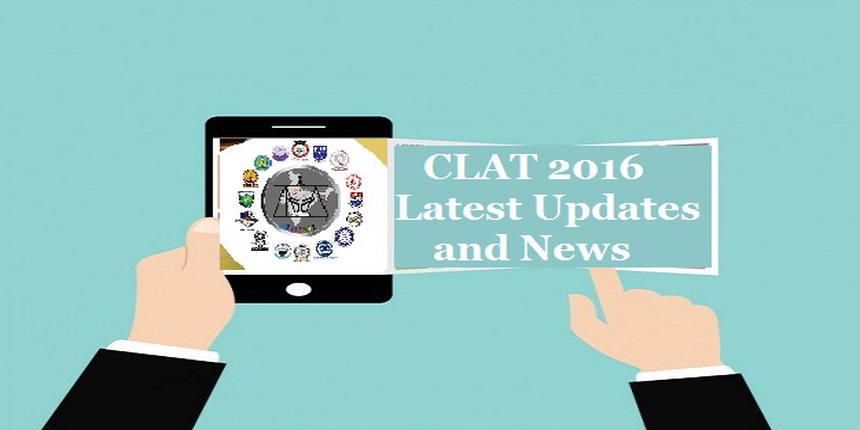 The third seat allotment list for CLAT 2016 announced on June 20. Candidates can remit admission fee for the third round of admissions between June 20 and June 22, 2016.

CLAT Committee announced second seat allotment list on June 13. The payment for the second round of admissions begin from June 14 and closes on June 17, 2016.

Provisionally selected candidates can remit the counselling fee and exercise their options for CLAT 2016 Counselling between June 6 and June 10, 2016.

CLAT 2016 Seat Allotment for first round has been announced on June 1, 2016 for admissions to 1974 candidates in the five-year integrated law programmes at 17 National Law Universities.

CLAT 2016 counselling guidelines has been announced by Rajiv Gandhi National University of Law (RGNUL), Patiala on May 24, 2016. Candidates aspiring to take admissions in the five-year integrated law programmes at participating 17 NLUs.

CLAT 2016 Results have been announced by Rajiv Gandhi National University of Law (RGNUL) Patiala on May 22, a day in advance to the scheduled date of declaration of the same.

CLAT 2016 Answer Key released on May 12; file objections before May 15

RGNUL Patiala released the answer keys of CLAT 2016 along with candidates' response sheets. Candidates need to file objections between May 13 and May 15 in the prescribed format.

RGNUL Patiala conducted the Common Law Admission Test (CLAT) 2016 at 66 test centres across India. The test-takers told that the exa, was very easy, however, Mathematics section had some tricky questions.

CLAT Committee has issued the admit card of CLAT 2016 on April 19 at 4:00 pm which can be downloaded by entering User Id and Password.

CLAT 2016 Admit Card can now be downloaded from April 19 as the exam committee has postponed the date of issue of admit card from the orginal date of April 15, 2016.

CLAT Convenor, Dr. G.I.S. Sandhu shares total number of applications of both registered as well as those finally submitted with Careers360, exclusively. He shared that as many as 67693 applicants had registered online for CLAT 2016.

CLAT 2016 Committee closes online application window on April 5. The admit card of CLAT 2016 can be downloaded from April 15.

A Public Interest Litigation (PIL) was filed in the Punjab and Haryana High Court by an advocate Hemen Aggarwal, pleading conduct of the coveted law entrance exam in offline mode and not online as it might affect the aspirants coming from rural background .

TNNLS reduces as many as 90 seats in UG programme

Tamil Nadu National Law School (TNNLS), Tiruchirappalli has reduced a total of 90 seats in its undergraduate law programme including BA LLB and B.Com LLB. With the reduction of such a large number of seats in TNNLS, CLAT 2016 will now be conducted for as many as 2252 UG seats.

Merely a day after opening CLAT application form, CLAT officials said that CLAT 2016 Application Forms will remain unavailable for about 20 hours between January 3 and 4 owing technical problems. Check below the snapshot of official announcement.

RGNUL Patiala has announced CLAT Application Forms from January 1, 2016. You can apply for the CLAT applications in online mode till March 31, 2016. Moreover, you will need to register for CLAT 2016 for the online applications.

CLAT 2016 will be held with an increased number of seats in both undergraduate and post graduate law programmes in National Law Universities (NLUs). Rajiv Gandhi National University of Law (RGNUL) Patiala is conducting Common Law Admission Test (CLAT) for as many as 2342 seats in BA LLB and 632 seats in LLM programmes.

The exam body has released the CLAT 2016 exam calendar on the official CLAT website. Candidates can check now the complete list of CLAT 2016 Important Dates.

CLAT-2016 Website - www.clat.ac.in - is live now for the candidates, who wish to apply for the coveted law entrance exam to be conducted on May 8.

Common Law Admission Test (CLAT) 2016 has been announced officially by Rajiv Gandhi National University of Law (RGNUL) Patiala on December 14, 2015. The coveted law entrance exam will be conducted on May 8 for admissions to 2252 seats in five-year integrated law programmes.

CLAT 2016 Official Page is live now. However, the page is under-construction as the official notification will be out on December 15.

CLAT 2016 Committe constituted; CLAT 2016 on May 8 and Applications to begin from January 1

CLAT 2016 Committee was constituted and in the meeting important decisions regarding CLAT 2016 were taken. CLAT 2016 Convener, Dr. G.I.S Sandhu said that CLAT 2016 will be held on May 8 as the online applications will begin from January 1, 2016.

Next hearing on SC Writ Petition is on January 4, 2016

The Supreme Court of India will again sit on January 4, 2016 for hearing on Writ Petition filed by Dr. Shamnad Basheer. Earlier, Dr. Basheer had filed a petition on August 28, 2014 demanding constituion of a permanent CLAT body.

Rajiv Gandhi National University of Law Patiala has officially notified that it will be conducting Common Law Admission Test (CLAT) this year. The most coveted law entrance exam shall be conducted in the second week of May.

The Supreme Court of India has issued noticed to three repondents of 'CLAT Permanent Body' case including the Ministry of Human Resource and Development, the Bar Council of India (BCI) and Rajiv Gandhi National University of Law Patiala which is scheduled to conduct the Common Law Admission Test (CLAT) this year.  The apex court has also sought responses from these three bodies within three weeks of issue of notice, i.e; by September 25.

The Chief Justice of India (CJI) H.L. Dattu rescued himself on August 31, 2015 after Dr. Basheer filed a petition against the NLUs and others for formation of Permanent CLAT conducting body. Now the case is listed before Justice J.S. Thakur.

The CJI being the Chancellor of NLUs had been involved in different administrative orders related to CLAT and step down as he didn’t find it legally righteous.

Dr. Basheer through the petition has requested the SC to pass Writ of Mandamus or any other appropriate writ with an objective to appoint an expert committee consisting of key stakeholders having knowledge of the legal domain and constitute an independent permanent body for conducting CLAT.

CLAT 2015 Facts and Figures
Create your own infographics

Common Law Admission Test (CLAT) is the most coveted law entrance exam conducted by National Law Universities (NLUs) by rotation in the order of their establishment for admissions to a total of 2252 seats distributed among the 17 participating NLUs for five-year integrated law programmes including BA LLB, B.Sc LLB and B.Com LLB.