With Common Law Admission Test (CLAT) 2016 to be held on May 8, law aspirants are gearing up for the law exam. During the preparation phase, aspirants need expert  guidance and suggestions for cracking the coveted law entrance exam. Careers360 brings yet another article from the series of ‘CLAT 2016 Preparation Tips by Experts’, for law aspirants like you, where experts share tips to crack CLAT 2016. 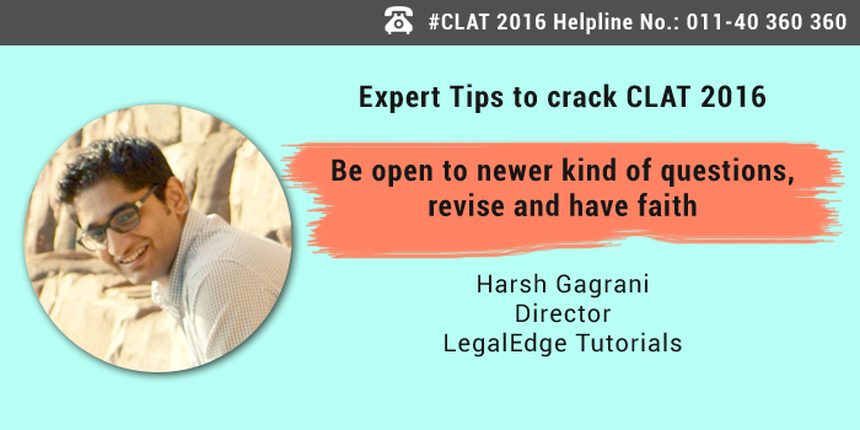 Harsh Gagrani of LegalEdge Tutorials shares his expert insights on how to prepare for CLAT in the remaining months. He also suggests specific strategies for the Online CLAT 2016 and recommends important books for the exam.

Read here the expert interview of Harsh Gagrani to know how to prepare for Legal Aptitude Section.

Excerpts of the Edited Interview

Careers360: What should be a law aspirants’ strategy in the next months to CLAT?
Harsh Gagrani: With less than five months to go for CLAT, a law aspirant should lookout for sources of intense testing and revision. A candidate, who has pretty much completed his course, should aim to solve at least one mock test every 3-4 days. Also, a student should practice all the previous years’ CLAT and AILET papers (all sections) to get a hang of the level of difficulty which usually comes in these examinations.

Careers360: How mock tests can help law aspirants and how many mock tests need to be taken in the remaining months?
Harsh Gagrani: Mock Tests, when taken in a simulated environment, replicate the actual CLAT taking experience, which will prove to be highly beneficial to the aspirants. A student should ideally join a Mock Test series providing dozens of Mock Tests and as stated before, should try and give a Mock test every 3-4 days.

Careers360: How do they need to prepare for ‘Legal Aptitude’ section as it’s considered the most important?
Harsh Gagrani: Indeed the section, ’Legal Aptitude’ is considered the most important of all as the section carries 50 marks. Moreover, in case of tie, the candidate having more marks in Legal Aptitude is given preference over others. Therefore, you need to concentrate a bit more on this section. I would like to share few suggestions for the important section–

a. Don’t look for multiple sources. Multiple answers to same/similar questions will confuse you and do more harm than good. Rather, look for one/two good sources where you get atleast 1400-1500 questions before the CLAT. Join any good coaching centre’s Test Series for the same.

b. This is probably clichÃ©d – but stick to the principle! And do not use any outside knowledge while answering questions.

c. Don’t read too much theory, but do prepare for Torts, Contracts and Criminal Law, as questions from these topics come mostly in Legal Reasoning and not in Legal Knowledge. Reading too much theory will further make you mark answers not based on your reading of the principle but based on your outside knowledge.

d. Don’t forget to give due emphasis to Current Legal GK. Many questions this year were asked from it. Though there is no separate source for this, any good CA source will suffice for this.

Careers360: Any more expert suggestions for the law aspirants?
Harsh Gagrani: Be open to newer kind of questions – This was the biggest lesson from CLAT 2015! The CLAT Committee has often resorted to giving generic notifications, whereby they can rightfully incorporate questions on newer formats. When you’re done with your usual material, it won’t hurt to buy a couple of books of CAT/MAT and practice newer kind of questions from it.

Revise – Especially for the students who have devoted a year to prepare for the CLAT, it is very easy to complete many prep books in the first few months. However, if you don’t find time to revise whatever you did back then, there is a good possibility you’ll forget a good chunk of important material by the CLAT day. Devote ample number of hours in the last one-two months to revision.

Have faith – Not scoring too well in Mocks? Worrying won’t do any good! Analyse your scores, identify your weaknesses at a micro level and work on them. 5 months is enough to perform miracles.