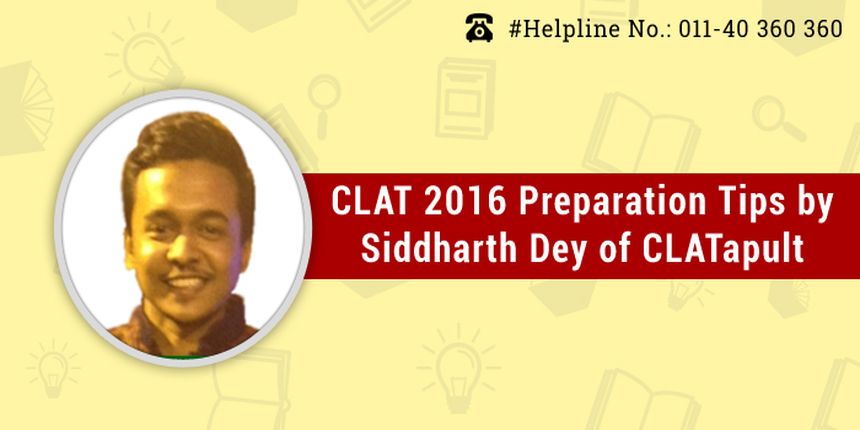 The preparation strategy for CLAT 2016 scheduled to be held in online mode on May 8 is a prime concern for the law aspirants who are planning to appear for the coveted law entrance exam. Some of the aspirants will be gearing for their 12th Board exams besides preparing for the Common Law Admission Test. While the board exams are likely to be held in March, the law admission test is just five months away. Experts and toppers agree that preparing for the exams is indeed a tedious task but one who knows the skill to manage breaks-in among the others.

As a part of the series of CLAT 2016 preparation tips, Careers360 brings you tips from a law entrance exams topper, Siddharth Dey who is now a member of CLATapult Team. Siddharth who was once an aspirant like you, too had faced the same situations and evolved his skills to crack the law entrance exams like CLAT and AILET.

The topper shares his insights on how to prepare for CLAT 2016 in the next months. Siddharth who also bagged AIR 7 in AILET besides cracking CLAT in the year 2014 also shares his strategy for taking the most sought after law exam in online mode and talks on the importance of taking mock tests.

Edited Excerpts of the Interview –

Careers360: How should a law aspirant prepare for CLAT 2016 in the coming months?
Siddharth Dey: Firstly, there is no reason to fret. Four to five months are enough time if utilized properly. You will have to chalk out your strengths and weaknesses that you know. It will prove vital in determining your focus areas. Once you start solving problems, the strengths and weaknesses might change roles and so should be taken care of.

Next few months will also include some major events like Board Exams, during which you will not be able to prepare. The time that remains before and after these exams is the actual preparation time that you have at your hands. You need to progress with this time-frame in mind and plan a rough idea of how you will space out your preparation process including subject-wise deadlines, mock tests and revisions.

The fundamental plan is to work out with the easiest things first. Simultaneously, special attention should be given to weak areas and should be equally worked upon. Some important subjects like Legal Aptitude should be specially taken care of.

Moreover, you will also need to take mock tests on a regular basis and determine your exact status so that you improve yourself with each appearing mock test and work on your shortcomings and honing your strengths further. You need to understand that appearing in mock tests without seriousness will lead an aspirant nowhere. It is an indispensable part of the process.

So, with the strengths addressed quickly, the weakness given a little more time than usual and the grey areas being worked upon, you will be moving with good pace, at least on a day-to-day level.

Most aspirants go for classroom coaching and spend a lot of time solving the work-sheets in hard-copy format and in a matter of a few weeks, gain a lot of confidence. But little do they realize that taking the exam online is a different ballgame altogether, which is why it is always insisted that every aspirant must take the online mock tests, numbering at least up to 40 till CLAT. Then, just by the sheer vastness of their experience with the online format of the exam, they must be as comfortable with it.

They must realize that covering up the entire curriculum for the exam is one thing and being fully prepared to take the exam is absolutely different and the only way to bridge this gap is through delving into the ocean of mock tests, where there are friendly as well as hostile interactions, just like sea-divers in the ocean.

As a matter of experience, I have seen several students doing very well in class-tests but go completely haywire while taking the mock tests, at least in the initial few ones. They learn the art of managing time, which is the most crucial aspect of the process, while taking the mocks.

Moreover, regardless the exam format, candidates also need to devise plans about how they intend to spend those two hours on the five subjects. Each individual has strengths and weaknesses and taking care of the same one need to approach the paper.

Careers360: How mock tests can help aspirants?
Siddharth Dey: Apart from helping you gauge your level of preparation, the mock tests also emulate how you stand against the clock–which the Common Law Admission Test is all about– unlike those solve-hundred-questions-by-next-weekend exercises. They are thus extremely vital and a better way to put things is to see it as a part of the prep process than one distinct from it since it is equally important as the studying/problem-solving part of things that comes before the mocks.

Students should take at least about 40 mock tests, including at least 12-15 which should be taken in the last month alone.

As a postscript, aspirants should not be swayed too much by a bad mock score or even a good mock score. It will all come down to what you do in those two hours and the idea is that you will hopefully do the same thing as performed in the mock tests. This is the reason why every mock test deserves your full effort. A poor effort is far worse than a bad score.

Careers360: What books would you recommend for CLAT preparation?
Siddharth Dey: CLAT aspirants should get their hands on a guide book, of which several publications are available in the market. This will draw a rough outline of the scope of the exam. I am suggesting few of them –

Careers360: Any other suggestions for law aspirants?
Siddharth Dey: Make the best use of time and the resources you have access to – you’ll be pleasantly surprised with the results.

Be confident and upbeat throughout this period. You will remain level headed through the day of the exam, and your confidence will stop you from unnecessarily re-checking the question to see whether you have answered correctly.

Common Law Admission Test (CLAT) is the most coveted law entrance exam conducted by National Law Universities (NLUs) by rotation in the order of their establishment for admissions to a total of 2384 seats distributed among the 17 participating NLUs for five-year integrated and post graduate law programmes including BA LLB, B.Sc LLB and B.Com LLB.

hay, I have passed my LL.B and I got 54 percentages and I belong to OBC CATEGORY so may you suggest me that May I fill the form of clat on not??

With 54% You are eligible for applying in clat and if you want to pursue masters in law than you should apply for it. As your admission will mostly depends on your performance in clat exam. So, if you are really determined to do masters than go for it.