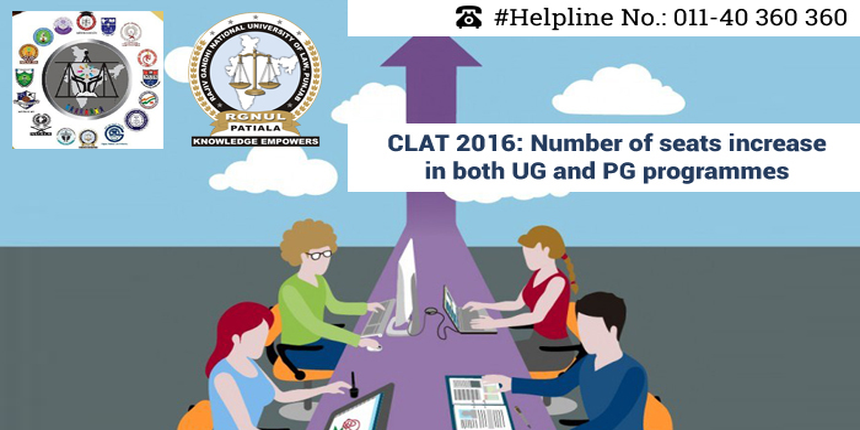 CLAT 2016 is scheduled to be held on May 8 with an increased number of seats in both undergraduate and post graduate law programmes in National Law Universities (NLUs). Rajiv Gandhi National University of Law (RGNUL) Patiala is conducting Common Law Admission Test Exam (CLAT) for as many as 2342 seats in BA LLB and 632 seats in LLM programmes. Last year, the coveted law entrance was conducted for as many as 2190 UG seats and 592 PG seats.

With RGNUL Patiala convening CLAT for the year 2016, the exam Committee has increased a total of 152 seats in the five-year integrated law programmes and as many as 40 seats for the post graduate law programmes. Dr. G.I.S. Sandhu, Convener of CLAT 2016 said, “This year we have included Maharashtra National Law University (MNLU) Mumbai in the CLAT Committee and also increased the number of seats for both BA LLB and LLM programmes.”
Common Law Admission Test Exam
[Click here to enrol for CLAT Complete Study Material and Preparation Package]

Careers360 brings you a detailed insight on how many seats have increased in every NLU for each of the programmes. Check below to know more on increased number of seats in NLUs for CLAT 2016.

*Last year, MNLU did not participate in CLAT

LLM Programmes – The number of seats for LLM programmes in NLU Odisha has been increased by two folds in CLAT 2016. However, as many as 9 LLM seats have been subtracted out from that of last year in NALSAR Hyderabad (Telangana). The table below represents the change in number of seats in post graduate law programmes in each NLU

*Last year, MNLU did not participate in CLAT

Last year as many as 39686 candidates had registered for CLAT out of which 37358 candidates appeared for the admission test in 16 NLUs. Check here the list of 17 participating NLUs.