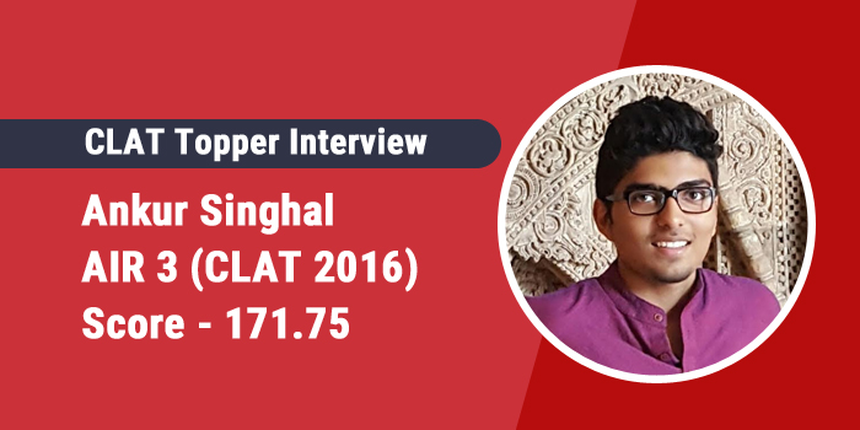 Ankur Singhal scoring 171.75 marks secured AIR 3 in CLAT 2016. Careers360 interviews the Delhite, who cracked Common Law Admission Test in his first attempt. The AIR 3 holder tells us that he had devised a smart study-plan to crack the national-level law entrance exam. Talking further to Careers360 on CLAT preparation strategy, the CLAT topper admits that there were  times when he used to get demotivated with pre-test results but eventually overcame those problems.

Ankur, an avid Hollywood movie lover says that the movies helped him in improving his English language. With 93.4% marks in 12th board exam, the meritorious Ankur shares that he decided to pursue law when he was in Class 9th. He also says that he would like to work as a litigation expert or in a law firm as a corporate lawyer. Read more about the CLAT AIR 3  topper as he talks about his success strategy.

Careers360: Securing AIR 3 in CLAT 2016 had been a proud moment for you and your family. Do you remember your first reaction when you came to know about your results? Were you expecting the same?
Ankur Singhal: I was certainly expecting a good rank but AIR 3 was dream come true. When I began my CLAT preparations, my father had asked me to aim for top three positions and that is what I achieved. My family was very happy and felt proud that I was able to achieve this feat.

Careers360: Being among CLAT toppers is not easy. How did you plan your exam preparation?
Ankur Singhal: I had prepared myself in a way that any kind of question paper would not shock me. I practiced and spent time regularly on each section. I had almost one and half years in my hand to prepare for the exam. I had divided my preparation into three-month phase and also set weekly and monthly targets.

When I was in class 12th, I used to take one mock-test per week and set mock targets for the next one. I started with a score of around 78/200 and improved it to 150-160 towards the end. I would also set weekly goals for completing maths and logic topics and had set monthly targets for improving English sections. It was on a daily basis that my GK improved.

Careers360: What made you choose a career in law?
Ankur Singhal: When I was in Class 9th, I thought of pursuing an undergraduate programme in law. My aim was clear when I was in Class 11th. This helped me in avoiding confusion which most of the children during his phase usually experience.

My parents realised that I had an aptitude for law. As for now, I have already experienced two High Court proceedings. These experiences strengthened my aim for practicing law even further.

Careers360: What was your thought process while preparing for CLAT?
Ankur Singhal: Time management and clear strategy coupled with smart work made me achieve this rank. In the initial phase, I did not follow a a regular time-table for each section and my preparation was haphazard. The kind of preparation was reflected in low scores in mock exams.

But after a few months, I devised a clear-cut strategy as to how much time I need to devote to each section and from where should I begin. So, on a daily basis, I began devoting the allotted time and each section was covered according to the strategy.

Careers360: How did you prepare for each section? What were your strong vis-Ã -vis weak areas? How did you improve on your weaker sections?
Ankur Singhal: On the basis of initial mock tests, I analysed my weaknesses and strengths in each section and then devised an independent strategy for all of them.

In English, my vocab and reading speed were weak. Thus, I started reading magazines, newspaper editorials and learnt new words every day. Improving vocab would not only help in the exam but also add value to language skills.

I found that I could solve most of the Maths and logical questions but took lot of time. This worked to my disadvantage because having slow reading speed coupled with slow speed of solving questions forced me to leave 25-30 questions, in the early phase of my CLAT preparation. I practised these two sections on a daily basis and this helped me to gradually improve my speed and accuracy.

I worked on GK section by going through three major sources. ‘The Hindu’, a monthly magazine either from Pratiyogita Darpan or Competition Success, and online websites like gktoday.in. I found out that this section needs to be studied regularly.

Legal Aptitude questions become easy if your reading speed is good. The ‘principle’ is the only thing known and no self-knowledge should be applied. Say, if the principle says that the act of theft is murder, then it is murder. Also, the facts include lot of irrelevant data and careful reading and practicing will make you skim those sections and solve those questions even faster.

Careers360: What role do mock tests play in the preparation phase?
Ankur Singhal: Mock tests are one of the most essential parts of the exam preparation because they actually simulate the exam like conditions and prepare us for the actual exam. Solving in stipulated time  and that environment helps in one’s prepartion

It also helps in assessing which sections are weak, which need to be improved and which are strong enough to be built upon. It helps to set targets and gives us a kind of self-assessment measure after every few days or weeks. It can help us understand what kind of questions can come and how to solve them.

Lot of success depends on what order (of solving sections) is followed on the exam day or for that matter in mock tests also. I tried different combinations in various mock tests and had realised my order to be this– GK, English, Legal, Logic, and Maths. But this was contingent upon the kind of questions that were in each section. One must use the ‘question paper’button to quickly glance through the kind of questions in each section at the beginning of the exam.

Solving mock tests is one part and its analysis is the other. Solving without analysing your mock test results has almost null effect. Analysis improves knowledge besides help you to improve your weak areas and strenghten your strong areas.

Careers360: What should be followed– Accuracy or Speed?
Ankur Singhal: CLAT is a 2-hour examination. I think many people try to complete most of the questions at the cost of accuracy. This doesn’t help because solving more questions and getting those wrong, wastes time and has a con-impact inviting negative marking.

Initial preparation should begin with accuracy and gradually the speed should be increased by practicing questions and solving mock tests. The aim should be to solve more than 180 questions with around 90 to cent per cent accuracy.

Careers360: Amidst such hectic schedule, what did you do to de-stress yourself?
Ankur Singhal: Playing sports, listening to music, watching television, meditating and sharing my problems with my family are some of the things that I used to do to de-stress myself.

I used to get demotivated sometimes either because of low scores or inability to learn static GK or for various other reasons. In those times of difficulty, it was my father who boosted my confidence.  I think one should share their problems with his/ her family and try to overcome such de-stressing situations rather than keeping it within oneself as it will worsen.

Careers360: What are your hobbies? What was the last film you watched before appearing for CLAT 2016?
Ankur Singhal: My hobbies are playing lawn tennis, table tennis, swimming and jogging. Apart from that, watching movies and listening to music are other hobbies. On an average I watched one movie every  week, mostly Hollywood. It also served my purpose of improving English.

I had watched Star Wars: The Force Awakens, three months before appearing in CLAT.

Careers360: What were your feelings while getting ready on the exam day?
Ankur Singhal: As far as I remember on May 8, 2016, I was relatively less tensed than I was on May 1 when I was to appear for AILET. My father accompanied me to the exam centre and constantly pacified me. He asked me to believe in all the hard work, I have done till date and assured me that it will not go  waste.

Careers360: Was there any strategy which you chalked out for appearing in online CLAT paper?
Ankur Singhal: It was my first attempt with online paper format. So, I began my preparation accordingly. I used to solve a lot of quizzes and tests on computers because solving Maths or logic questions besides reading English comprehensions are quite different as compared to the offline version.

On the day of CLAT, I didn’t worry for the time. However, I vaguely kept an eye on the time because looking at the countdown frequently makes the situation tenser and stressful. I had completed 199 questions in around 90 minutes.

Careers360: What message would you like to share with CLAT aspirants?
Ankur Singhal: CLAT exam is easy if the required amount of hard work is put in with right strategy and time management. I believe regular practice and consistency will help in getting good scores. I will not advice to rely too much on guess work, however, some smart guesses are fine. Finally, don’t think too much about the examination as it mounts pressure on the aspirant. Practice, practice and practice till you appear for the exam and be confident about your preparation. All the best!

Stay tuned to law.careers360.com for more feature and updates on CLAT