Atharv Gupta cracked Common Law Admission Test (CLAT) 2016 with an All India Rank (AIR) 7. Careers360 interviews the 18-year old Delhite, who ascended to AIR 7 in CLAT 2016 from AIR 873 that of last year. Atharv, who is already pursuing his 5-year integrated law programme from Amity Law School, now feels happy as he is about to join his dream law school– NLSIU Bangalore. While sharing his success story, the CLAT topper says that GK is his favourite subject which he enjoyed preparing the most. 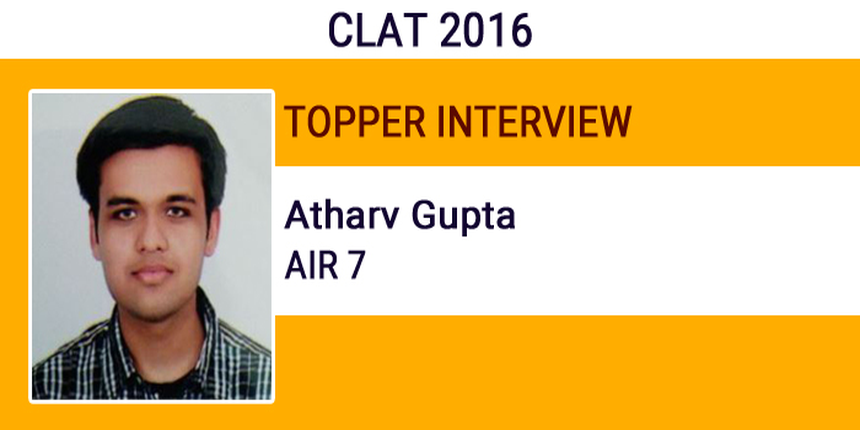 Atharv who loves reading newspapers daily attributes his success to consistent preparation of General Knowledge and Current Affairs sections despite maintaining a regular attendance in his current law school.

He says that he has learnt patience from the cricket legend Rahul Dravid and is impressed with politicians like Arun Jaitley and Kapil Sibbal who are the bigwigs of the law profession. The CLAT topper also shares that he visits law.careers360.com regularly to keep himself updated on the domain and to get the expert tips on preparation. Read more on different aspects of his preparation journey in this full interview below.

Careers360: Congratulations on securing AIR 7! How are you celebrating your success?
Atharv Gupta: Thank you for your wishes. The feeling is quite pleasant which can’t be expressed in words. I am celebrating my CLAT success with family and friends.

Careers360: What is your CLAT 2016 score? Is this your first attempt?
Atharv Gupta: No, this is my second attempt as last year too, I took CLAT. This year I have scored 170.5 marks in CLAT, which is almost double as compared to last year’s score of 91 (AIR 873).

Careers360: Share your success mantra behind the ‘doubled CLAT score’?
Atharv Gupta: Since I took CLAT last year too therefore I already knew the online test pattern and had completed most of the CLAT syllabus. Beginning with my stronger sections like English, Mathematics and Legal Aptitude, I would practice with the last years’ question papers of different law exams.

My next strategy was to stay updated with current affairs and revise General Knowledge section, which I assume to be imperative for cracking the common law admission test. Moreover, I would also study the different ‘legal jargons’ for Legal Knowledge section besides keeping an eye on the recent updates on the various court cases of national importance.

Along with all these revisions and updates, I used to take regular mock tests and analyse my mistakes.

Besides, I would also like to express my gratitude to Rajneesh Singh, the CLAT mentor (DO-Zen and CLAT Essentials Founder) who guided me while I was preparing for the law exam and suggested me to take a number of mock tests.

Careers360: How is mock test beneficial for cracking law exams like CLAT?
Atharv Gupta: I believe mock tests are indispensable when you are appearing for coveted law exams like CLAT. In 4 months-time from January, I took a total of 80 mock tests before appearing for the Common Law Admission Test. I would have taken a number of assessment tests and mini tests too on a regular basis.

Taking online mock tests from different resources boosted my confidence. With each mock test, an aspirant can analyse the preparation level and know improvement areas. After taking so many mock tests, I could complete my CLAT paper 40 minutes prior to the schedule time.

Careers360: You are already pursuing BA LL.B from a law school. How did you continue your preparation despite hectic class schedules?
Atharv Gupta: I would say it was a hectic preparation as I had to manage my time schedule for CLAT preparation along with the daily routine at Amity Law School, Delhi. I would return home after attending my law classes at 3:30 pm and after an hour or so, would sit down for revising and practicing questions for the next 5-6 hours.

As I would get time on weekends, I utilized them to study for 10-12 hours, taking short breaks in between. Also, being a law school student, I knew how to study and attempt questions. While Legal Aptitude section remains a challenging area for most of the test takers, I had definitely an edge in this section.

Careers360: With such a jam-packed schedule, how did you distress yourself?
Atharv Gupta: At times when I felt stressed, I would listen to rock music to distress myself. Sometimes on weekends, I would play tennis and basketball, which is a good exercise and helps me in relaxing.

CLAT 2020 - NUSRL, Ranchi has postponed CLAT 2020 due to Coronavirus outbreak; application are op...

Solving previous year question papers and sample papers will help you understand what kind of questions are asked and it will boost your confidence.

what is the cutoff of CLAT for general category??

These are the CLAT cutoffs closing ranks of 2019 third round GEN category:-

You may refer to this article for more information about CLAT Cutoff 2020.

Common Law Admission Test (CLAT)) is an entrance exam conducted across India for admission into 19 National Law Universities along with other Private Law Schools. It was scheduled to be conducted on 10th May 2020 but has been postponed due to COVID-19 Epidemic. Also the date for filling cLAT application form has been extended till 25th April.

Now you have enough time to prepare and score good in CLAT.

You can also take help of this Mock test Package to boost your preparations for CLAT - https://learn.careers360.com/test-series-clat-free-mock-test/?icn=CLAT_test_series&ici=CLAT_ebook_list_contmap

Hope this was helpful.

Hello.
Till now from the official news the date of filling the application form of CLAT exam has been extended to 25 April because of COVID-19
For more details you can refer below link:
https://law.careers360.com/articles/clat-application-form
Best of luck.
Read More
Answer
Answer Later
Report
16 Views

can we do clat preparation without coaching classes

Yes you can prepare for CLAT without coaching. What coachings provide is consistency in preparation. If you can manage to be consistent on your own then t you are good to go. Prepare with a structure, prepare a timetable, see the syllabus and study accordingly. Do not study out of syllabus and do no leave important topics.

Get enroll to a mock test series to keep a track of your preparation. This will be enough for you to crack CLAT.

Here are few links for you:-