Two days after withdrawing its CLAT seat allotment list which did not carry category-wise allotment, CNLU Patna released a fresh list on June 8. The revised list carries category-wise allotment across 18 participating NLUs which conduct admission through the centralised entrance and counselling process. This year, CNLU Patna is conducting Common Law Admission Test (CLAT) and subsequent counselling on behalf of all NLUs. 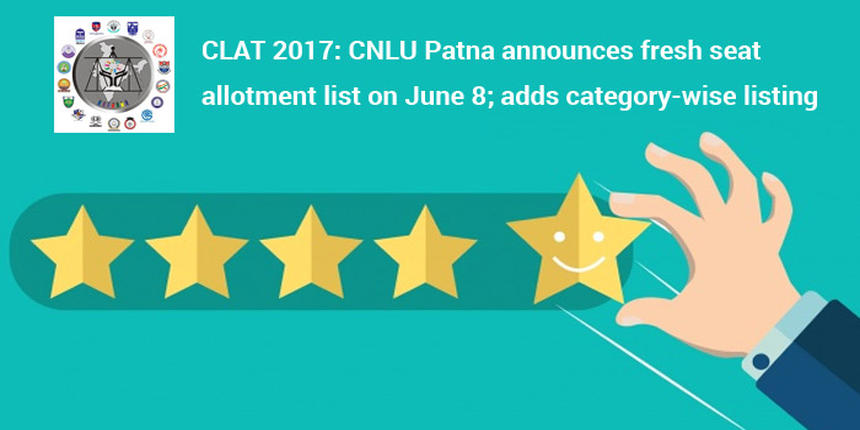 On June 6, 2017, Careers360 had reported the errors in CLAT seat allotment and counselling process to the CLAT officials, following which the CLAT conducting body, CNLU Patna withdrew the published seat allotment list of CLAT 2017.

The candidates who have been allotted seats in NLUs will need to pay an online counselling fee and exercise their CLAT counselling options. “Candidates need to note that the last date for making the payment of Online Counselling fee of Rs. 50,000 and exercising the options for locking or shifting is up to 10th of June 2017 till 4 pm,” reads a notification on the official website of CLAT. Earlier, the last date of exercising options was June 8, 2017.

With this, the CLAT 2017 counselling schedule also stands changed.

Earlier, CLAT Committee headed by CNLU Patna had scrapped four erroneous questions of CLAT 2017 after admitting multiple discrepancies in the question paper of the national-level test held on May 14. An expert committee set by the CLAT Convenor had also found three wrong answers in the official answer key released by the CNLU Patna.  Read here for more details.

Stay tuned to law.careers360.com for latest news and updates on CLAT