CLAT Committee headed by CNLU Patna has scrapped four erroneous questions of CLAT 2017 after admitting multiple discrepancies in the question paper of the national-level test held on May 14. An expert committee set by the CLAT Convenor also found three wrong answers in the official answer key released by the Common Law Admission Test (CLAT) 2017 conducting body. 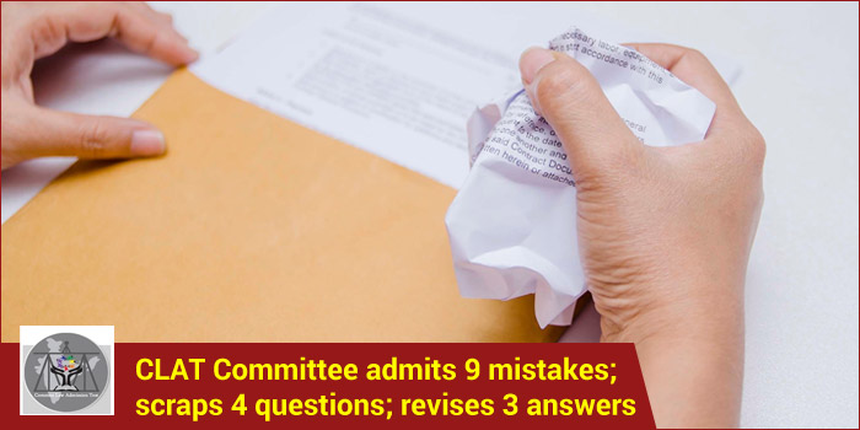 The expert committee was set-up by CLAT Convenor Dr A Lakshminath after test takers and experts strongly raised doubts on more than 15 questions of the CLAT 2017 online question paper. The maximum change in marks as per the revised CLAT 2017 answer key would be five, which certainly is going to change the earlier CLAT 2017 scores and of course the merit list of CLAT candidates.

According to the revised CLAT 2017 answer key, released after the expert committee review, the examination committee has admitted nine mistakes out of the total 15 alleged erroneous questions claimed by CLAT 2017 takers and experts. Further, amongst these nine questions, the CLAT committee has accepted that two of the questions were ambiguous and as many as four questions have been scrapped for discrepancies. “For some questions, discrepancy is found in questions/answers. So, the questions are ignored for all candidates,” reads the CLAT response to discrepant questions.

Moreover, three answers of the Logical Reasoning questions have been corrected in the revised official answer key released after the expert committee review. As mode of evaluation changes and multiple questions stand scraped, Careers360 analyses how it will impact your scorecard now.

The CLAT 2017 Committee has scrapped as many as four questions as they admitted that those questions are discrepant in nature. As per the examination expert committee, one question each from English Comprehension, General Knowledge, Elementary Mathematics and Logical Reasoning section had discrepancies. “For this question, discrepancy is found in question/ answer. So, this question is ignored for all candidates,” reads the official note against a wrong question in the revised CLAT answer key. The same note appears with as many as four questions. No marks will be awarded or deducted for these four questions.

Further, the answer options of three questions in Logical Reasoning sections have been revised. However, the candidates may not have noticed this as CLAT Committee has not indicated this in the revised official answer key. The candidates who had responded with the earlier answer options would now be liable to deduction of marks and those who had responded with the option that is indicted in the revised answer key now would be awarded the marks, resulting in increase of overall scores in CLAT results 2017.

The answer options as per the May 16th provisional answer key–

With the above changed in the evaluation process, the candidates will now notice a change in CLAT result 2017 and score-card.

CLAT Committee and CNLU Patna will organise CLAT counselling 2017 for allotting seats being offered at 18 NLUs. The law entrance admission committee will be publishing an indicative list of candidates for CLAT seat allotment 2017 as per their rank and NLU choice preference on June 5, 2017.

Stay tuned to law.careers360.com for more featured articles and updates on CLAT