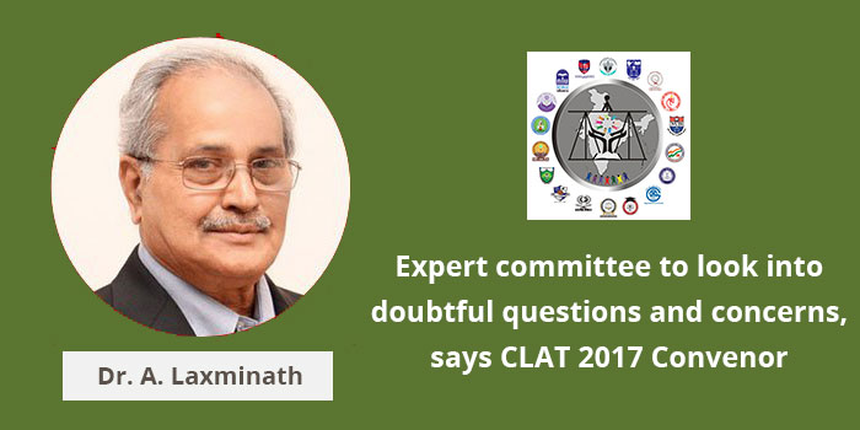 Amid chaos and restlessness among CLAT 2017 takers regarding answer key and discrepancy in the question paper of the Common Law Admission Test (CLAT) held on May 14, 2017, Careers360 spoke to CLAT 2017 Convenor Dr A Lakshminath. The CLAT Convenor said that an expert committee is being set up to look into the concerns raised by students and experts. He says that maintaining fairness in the system was his utmost priority and any necessary action required towards this will also be taken very soon.

Read this interview to know what Dr Lakshminath shares more on the controversy surrounding CLAT 2017 testing.

Careers360: CLAT takers and experts have raised doubts on CLAT 2017 answer keys and also discrepancies in question paper. What is your take on this?
CLAT 2017 Convenor: We are looking into the concerns raised by different stakeholders. However, let me clarify that CNLU Patna is only responsible for smooth and fair conduct of the exam on behalf of all participating National Law Universities (NLUs) of CLAT 2017. It was a Common Law Admission Test Expert Committee which had set the question paper and no particular NLU can be held responsible for this. The expert committee comprises several members representing different NLUs.

Careers360: What should the CLAT 2017 takers do now?
CLAT 2017 Convenor: CLAT 2017 Committee has facilitated an online link on CLAT official website for filing objections and doubts on the questions and answer keys. The test takers takers are advised to file their objections on the question paper and answer key of CLAT through the official online link only by May 19, 2017 (11:59 pm). This will also help us to understand their concerns in a better way.

Careers360: Is the CLAT Committee facing any problem during the objection filing process of CLAT?
CLAT 2017 Convenor: There are some candidates who have sent the representation and objections regarding the CLAT answer keys and questions to the official e-mail of the CLAT office. It is not to be done in this way. Candidates who have sent the representation and objections are advised to register the same by logging into their registered CLAT id within the prescribed time and date; i.e., till Friday, May 19, 2017. Moreover, the representations made directly to the official e-mail address shall not be entertained at all.

Careers360: What is your message for CLAT 2017 examinees?
CLAT 2017 Convenor: I assure to the CLAT takers that nothing will go wrong. The CLAT Committee will follow whatever it takes to maintain complete transparency in the examination process.

Stay tuned to law.careers360.com for more feature and interviews on CLAT

how much time we should have for Lsat preparation

For Lsat preparation the minimum time one should give is approx 120-150 hours in a 2-3 month period. Some students who wants to top and get best  spends 250-300  hours.

And also it depends on your catching power that how you grab the things and in how much time.

If you are not able to give this much time and you only have 10 hours to give per week so you should start alot earlier.

Is it compulsory to give clat exam to take admission in pu ??

Hello.
Punjab University offers law courses ,you can take admission in it by giving its on exam PU LLB entrance exam it is not compulsory to give clat examination, but if you want to take admission in ba LLB program then you will have to give PU BA LLB entrance exam your merit will be prepared on the basis of this exam and you can get into it for the above course.
Best of luck.
Read More
Answer
Answer Later
Report