CLAT 2017 has received a record 50,676 applications, marking an increase of around 13 per cent from last year and achieved without any extension in the last date. Careers360 spoke to Dr A Lakshminath, the CLAT 2017 Convenor, about the key factors responsible for this rise and the various challenges faced during the application process. 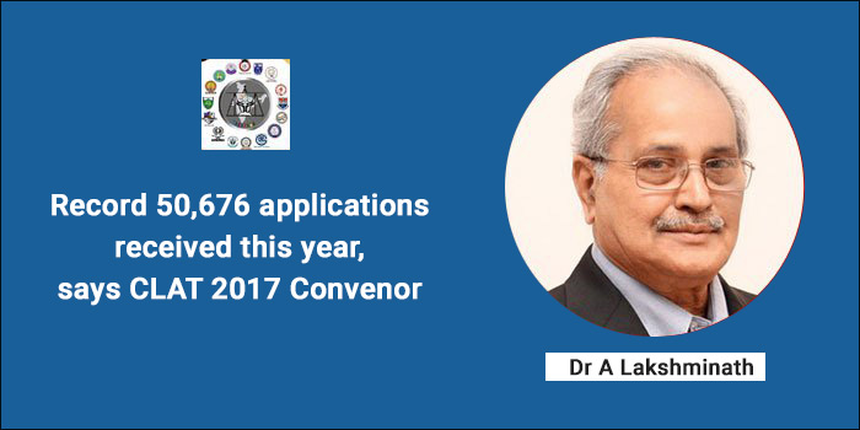 Read on to know more about the plans being made for administering the Common Law Admission Test.

Careers360: Congratulations on the record number of CLAT applications. What do you think are the key factors behind this?
CLAT Convenor: Thank you. I am glad to announce that this year, without any extension in dates, the CLAT Committee received around 50,676 applications, the highest recorded till date. The key factors which I feel are responsible for this rise include the increasing inclination among students to pursue legal education and the removal of the age bar by the Bar Council of India (BCI) after the Supreme Court’s March 2017 order regarding the age policy.

Careers360: Did the CLAT Committee face any challenges during the application process? How did you cope with it?
CLAT Convenor: After the official notification was received from the BCI regarding the removal of the age bar, the foremost challenge was to implement it on the CLAT application form. Our technical experts took care of this on time as we believed that no candidate should lose their opportunity to enrol for CLAT 2017. Otherwise, there were no major problems faced by the Committee.

Careers360: What preparations have been done to conduct CLAT on May 14, 2017?
CLAT Convenor: The examination committee is all set to conduct the Common Law Admission Test on the scheduled date, i.e., May 14, 2017. We will be conducting the online entrance test in a total of 138 exam centres across 66 cities. As of now, there are no cancellations or additions to the existing list of CLAT exam centres. However, incase an exam centre does not have the adequate number of test takers, say maybe only 25-30, we will cancel that exam centre and allot new ones to the affected candidates. These candidates will also be re-issued the CLAT admit cards with the changed test centre. Incase any candidate faces any technical problem in the examination centre or has any computer-machine related problems, they should immediately intimate the invigilator. There will be enough buffer computer systems available at the examination centre to take care of such problems. Moreover, the time lost in the change of system will be duly taken care of as each and every second will be recorded by the real time server. We are looking forward to conducting CLAT 2017 in a fair, transparent and glitch-free manner.

Careers360: What is the solution to end tug-of-war between BCI and other legal education stakeholders over age bar in the undergraduate law programmes?
CLAT Convenor: The CLAT 2017 admission process will conclude by July 6, 2017. The age case is currently sub-judice in the apex court as the next hearing is scheduled for the third week of July. We will abide by the Honourable Supreme Court’s orders and await the final verdict.

Careers360: Are there any specific changes in CLAT exam pattern?
CLAT Convenor: The CLAT exam pattern remains the same without any changes. The national-level law entrance test will be held in the form of a secure and un-interrupted Computer Based Test (CBT) using LAN. The mode of examination will be examinee friendly and all measures will be taken to ensure the proper conducting of CLAT 2017.

Stay tuned to law.careers360.com for more news and features on CLAT