CLAT 2018 Topper Interview –Apoorva Nangia scoring 146.25 of 200 marks in CLAT 2018 has included herself in the CLAT 2018 Topper’s list with an AIR 9. In conversation with Careers360, the CLAT 2018 topper shares that while determined to seek admissions in one of the 19 National Law Universities (NLUs), she began her CLAT preparation while she was is Class 11th. ‘The Chainsmokers’ music band follower says that she finds music more relaxing and stress-busting than any other activities. 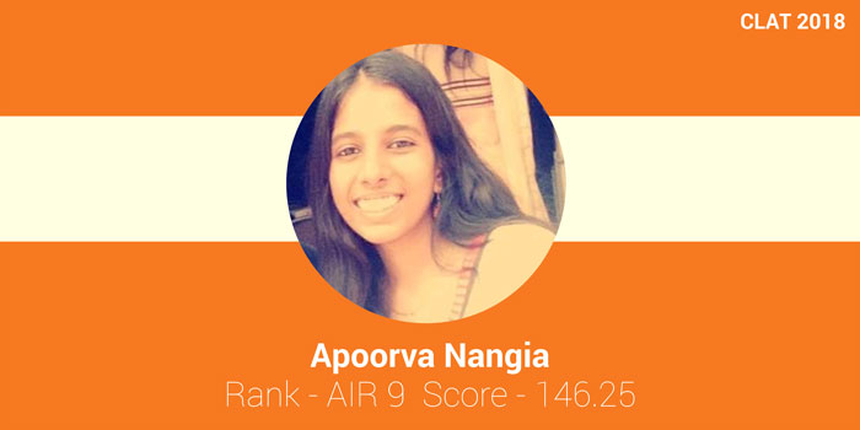 The Hyderabad girl who finds an interest in suspense television series including Sherlock Holmes and Grey’s Anatomy, says that it’s something which she relates with her pursuance in law. She also shares that she developed an interest in law education at an early age of 13 years only.

Further, during the Careers360 Topper Interview, Apoorva Nangia tells that in pursuit of getting a NALSAR seat, she strategized her preparation in such a way that she hit upon an NLSIU Bangalore seat.

Read this interview of CLAT 2018 Topper, Apoorva Nagia (AIR 9), who shares her preparation strategy for the Common Law Admission Test.

Careers360: Congratulations! For making it to the Top 10. Was that a part of your plan?
Apoorva Nangia: Indeed being in the top 10 is an excitement which can’t be expressed in words. Actually, my aim was to grab a NALSAR Hyderabad domicile seat. However, it’s the two-year hard work which has been paid off into a much bigger dream of getting into NLSIU Bangalore seat. Further, being among the top 10 is a fruition of that dream.

Careers360: When did you decide to pursue a career in law?
Apoorva Nangia: I was in Class 8th in the year 2013, when I admired the black and white robe. I gathered information about these professionals and the profession. Since then, I developed an interest in the law education. When I was in Class 11th, I finalised my decision for writing the law entrance examinations and get into an NLU for pursuing my dream.

Careers360: Apart from CLAT 2018, which other law entrance exams did you write? How was your performance in those exams?
Apoorva Nangia:  Besides the CLAT, I have also written AILET, SLAT (earlier SET Law) and LSAT India. My preparation and performance in all these examinations have been good. I have also enlisted myself in the top 10 positions in AILET 2018.

My preparation strategy for CLAT and other law exams was section-wise. I would prepare for each section and give each of sections, the required time. For reference, I would invest more time in Legal Aptitude and General Knowledge as they cover more marks in the Common Law Admission Test. So, answering more questions correctly from these two sections would eventually give me an edge. However, I had also invested a good amount of time in sections like English, Reasoning and Mathematics, as every marks count.

Careers360: Did the CLAT AIR 9 have a fear of any section or any topic? How was Mathematics for you?
Apoorva Nangia:  My basics in each section were quite strong. Mathematics was my strongest suit. When there were a few months to May 13th CLAT, I had a fear that my Legal Aptitude section was not up to the marks. I feared that this section was carrying most of the marks in the online CLAT paper and if I did not improve, this will be something 'not good’ for me.

Every time I thought my performance in a certain section was dropping, I’d spend a little longer improving on those questions.

I would also solve sectional tests and practise workbooks which helped me a lot.

Careers360: What was your exam day experience? What strategy did you follow?
Apoorva Nangia:  I was quite relaxed on the day of CLAT. I revised a little on that day and kept myself calm and motivated with the self-confidence. I knew that I had been preparing for this day for last two years and was aware of the fact that a panic may ruin everything.

Believing in my own abilities and maintaining the inner-peace during technical glitches at my exam centre made me perform well in the 13th May online test.

Careers360: How did you balance the board exam preparations with AILET and other law entrance tests?
Apoorva Nangia: As I shared earlier, I began my CLAT preparation right when I was in Class 11th. So, I had a two-year preparation time in my hand. I had already planned in advance for my CLAT as I would finish the basics in the first year and move onto revision and solving questions in the second year of my preparation for CLAT.

I stuck to my CLAT preparation plan and it solved a lot of other issues including my board exams. I wanted to do well in academics as well as entrance exams and I knew that both would require time and effort. So, I never skipped my classes while concentrated on all the topics being taught in school. Next, I devoted at least 2-3 hours and revised whatever was taught in the school.

During my Class 12th, in the initial days, I would give at least four hours for my CLAT preparation and later on, say in the month of January-February, I gave my most of time to 12th board preparation and the spent the rest of time-solving CLAT mock tests and previous years question papers.

Careers360: Did you take up any coaching? How important was coaching for you?
Apoorva Nangia:  Yes, I took the help of coaching guidance from Career Launcher when I was in 11th standard.

The coaching classes have also played a very important role in my CLAT preparation. The weekly classes helped me clarifying the basic concepts for the subjects like Legal Aptitude including Legal Knowledge and Reasoning.

The coaching guidance helps an aspirant in knowing important topics and way to learn them and also aids in improving on the weaker sections.

After all this guidance, the candidates also need to put in self-effort and keep practising for success.

Well, I began with one mock test per week and took this number to three per week in the last months of my CLAT preparation, as I took over 75 full-length mock tests.

Mock tests are indicators of performance comparison with other law aspirants. When I took the mock tests, I analysed them completely, where I could see the scope of improvement in the sections and the questions. I would work further and improvise my performance.

Careers360: All this preparation for CLAT and board examinations had been quite stressful for you. How did you de-stress yourself in between your CLAT preparation?
Apoorva Nangia: Juggling between school in Class 12th and coaching for CLAT preparation, my hobbies and extra-curricular activities received a setback. However, I took out time in between to listen to my music collection. I am very fond of ‘The Chainsmokers’ band. I also watched a few series of suspense genres like ’13 Reasons Why?’ and ‘Sherlock Holmes’.

Careers360: What are your suggestions for CLAT aspirants who will appear for the test next year?
Apoorva Nangia:  With each passing year, each CLAT paper gets messier than the previous one, breaking the record of “worst CLAT paper” every year. The only way to survive this mayhem is to push through it with all you’ve got. An early commencement of preparation will give you time to absorb the intricacies of each topic. It will also give you time to balance both academics and CLAT.