CLAT 2019 is going to be pleasantly different in many terms, says CLAT 2019 Convenor

The CLAT Consortium of NLUs, established four years back with a purpose to improve the Indian judicial system through education has been squared to conduct the Common Law Admission Test from 2019 onward. The CLAT 2019 Convenor, Dr Srikrishna Deva Rao in an exclusive interview with Careers360 talks about this Consortium of NLUs, the basic idea about its establishment and the need for CLAT permanent secretariat. Dr Rao who is apparently the Vice Chancellor of National Law University Odisha (NLUO) Cuttack, the NLU which will be convening the national-level law entrance examination this year, also shares reasons for conducting CLAT in offline mode, even as he believes that reinstating the examination mode will attract more rural applicants and help in keeping the technical glitches away. 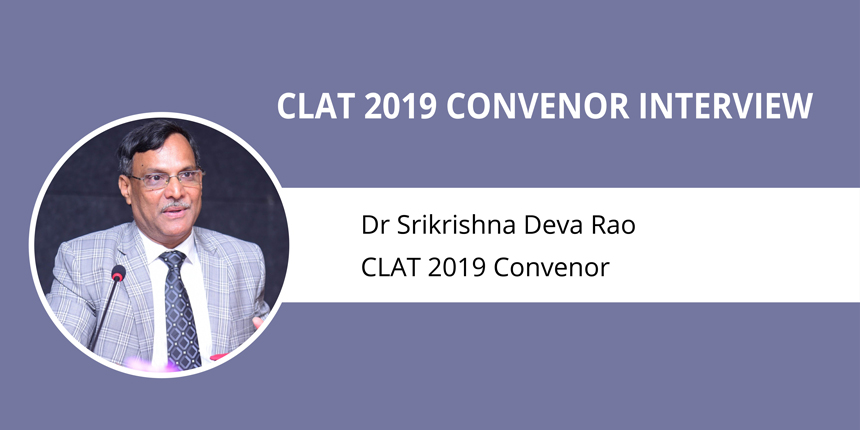 Read this exclusive CLAT 2019 Convenor interview with Careers360 where the NLU Odisha VC shares his tips to crack CLAT 2019 with the aspirants.

Careers360: It has been exactly 12 years when the national-level law exam, CLAT had been introduced. What made the NLUs to create a Consortium after so many years?
CLAT 2019 Convenor: In order to understand the creation of Consortium of NLUs, we also need to look into the past of the Common Law Admission Test and its existence. Before the introduction of CLAT, the national law schools in India conducted their own separate entrance tests in offline mode requiring the candidates to prepare and appear separately for each of these tests.

Between these twenty years 1987 and 2007, each of these seven NLUs conducted their own tests and that burdened law aspirants with multiple tests. The matter drew national attention in 2006 by a concerned parent filing PIL for a common test, Varun Bhagat vs. UOI against seven existing law schools at that time. The Chief Justice of India directed the MHRD and UGC to consult with the National Law Universities to formulate a common test. That is the history behind the CLAT which began in 2008.

The Vice Chancellors of the seven NLUs in 2008 then signed a Memorandum of Understanding (MoU) to conduct the Common Law Admission Test (CLAT) each year and the responsibility of conducting the exam was to be rotated on the basis of year of establishment.

The participating NLUs met again in the year 2015 thus constituting Consortium of Indian National Law Universities to improve justice system through legal education and provide coordination among all law schools to achieve highest standard of legal education in the country.

Moving further, the twenty-one NLUs finally resolved to create a Consortium with its Permanent Secretariat at NLSIU Bangalore on August 3, 2018. The process has already been initiated to provide the Consortium a permanent structure in the form of a registered society. In this process, the Consortium resolved to implement measures to streamline the conduct of the Common Law Admission Test.

Careers360: How is this structural change going to affect the examination?
CLAT 2019 Convenor: The Common Law Admission Test now onward shall be conducted by the Executive Committee of the Consortium instead by one NLU on rotation basis. This has changed the structure from one to centralized system. This centralized process will not only bring transparency and accountability in the admission process but also enhance quality and excellence in legal education.

Careers360: Can you explain the possible reasons for moving back to offline examination mode?
CLAT 2019 Convenor: The NLUs on their part have an experience of conducting CLAT in offline mode for many years and therefore are familiar with it. The decision of Consortium to conduct CLAT 2019 offline was made in the light of fact that number of candidates appearing in the law admission test is not large as compared to that of examinations like JEE Main/NEET. The offline test, moreover will provide a wider access to aspirants from rural areas and also help in avoiding the technical glitches as that encountered in last year’s CLAT.

Careers360: With the examination reinstated to offline mode, will there be change in number of CLAT 2019 examination centres?
CLAT 2019 Convenor: Yes, with no more online pattern, we will be conducting the CLAT 2019 in an offline mode where there will be a dire need to change the number of CLAT 2019 exam centres. While we have decided to hold the admission test in all the 21 National Law Universities, some other reputed institutions will also be identified as per the suggestions of the NLU Vice Chancellors of that region. The Consortium will tab only those institutions as CLAT 2019 exam centres where candidates will get the necessary state-of-art infrastructure. This year the examination is to be held in as many as 66 cities across India.

Careers360: What suggestions would you like to share with CLAT 2019 aspirants?
CLAT 2019 Convenor: There are a number of key points which I think I should advise to all the aspirants preparing for CLAT 2019. The candidates during their CLAT preparation should give equal importance to all the segments of the paper. However, practice of logical reasoning, legal aptitude and current affairs questions will help the law aspirants in getting more marks. As the number of questions in each of the segment varies, candidates will have to very cautious about the time- management. CLAT is not an easy exam but it isn’t unattainable either. The CLAT aspirants need to have a clear goal, prepare with all their efforts and enjoy the process towards achieving goal.

How to prepare for CLAT 2019 without coaching