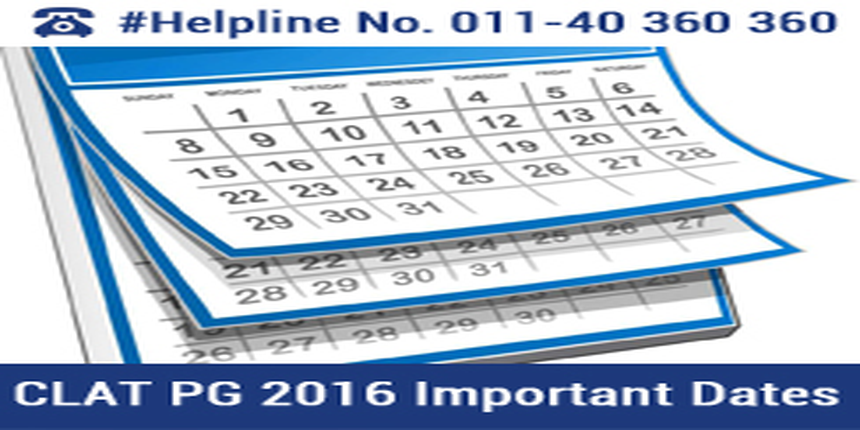 CLAT PG 2016 Important Dates – Rajiv Gandhi National University of Law (RGNUL) Patiala had announced the important dates of CLAT PG 2016. Though, the official notification was announced on December 14, 2015, the NLU and CLAT Convener had exclusively informed Careers360 regarding the dates way before the official announcement. You can check CLAT PG Important Dates 2016 below in this page.

With Common Law Admission Test for Post Graduate exams (CLAT PG) 2016 Important Dates, you can keep a track of scheduled events of the PG exam including notification date, application date, date of issue of admit card, declaration of results and counselling schedule of CLAT PG 2016.

CLAT PG 2016 Important Dates will help you in avoiding any exam events of the law entrance exam and thus cool your exam pressure as you’ll escape any eleventh-hour work.

RGNUL Patiala will be conducting CLAT PG 2016 in online mode on May 8 for a maximum of 2 hours beginning at 3:00 pm.

The applications were available from January 1, 2016 and the official notification was out on December 14, 2015.

You could fill CLAT PG 2016 Online Applications till April 5 as the NLU has issued E-Admit Cards on April 15.

RGNUL Patiala and CLAT 2016 Committee shall be closing the entire admission process by July 6.

Common Law Admission Test (CLAT PG) is the national level law post graduate entrance exam conducted every year for shortlisting candidates for as many as 604 seats distributed among the 17 participating NLUs. Last year as many as 5514 candidates had registered for CLAT PG out of which 4863 candidates appeared for the post graduate common law admission test of NLUs.

ONGC Recruitment through CLAT 2019– The Oil and Natural Gas Corporation has announced the cutoff ...

If you want to fill the application form in online mode then you can fill it by visiting its official website i.e https:// consortiumofnlus.ac.in/clat-2020

Steps you need to follow while filling the form are:-


For detailed information go through https://law.careers360.com/articles/how-fill-clat-application-form

I hope that you find this helpful

Good luck for your CLAT examination

A ST category candidate need to score at least 50% marks in the graduation. But as you have obtained 49% marks, you are not eligible to write CLAT PG Exam. Any candidate who doesn't meet the prescribed eligibility criteria will not be given admission.
http://law.careers360.com/articles/clat-eligibility-criteria/amp
Read More
Answer
Answer Later
Report
41 Views

which MCQs book is best for clat pg entrance exam?

Some of the good books are mentioned below:

You may please refer to the below article for downloading books or knowing other good books for CLAT PG:

What reference books are required for CLAT 2020

You can go for following books for CLAT 2020 preparation.

For detailed information go through our page for which link is provided below :-

View All Questions
Have a question related to CLAT PG ?

All about CLAT PG

Your CLAT PG brochure has been successfully mailed to your registered email id .