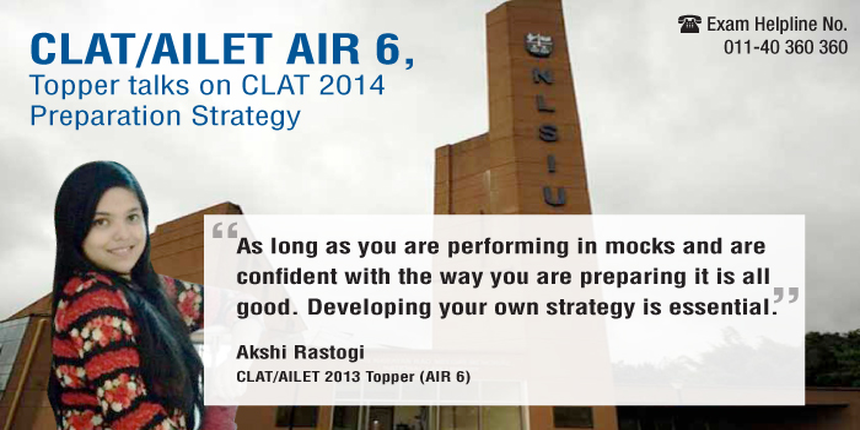 CLAT, the Common Law Admission Test 2014 is being conducted by Gujarat National Law University (GNLU). It’s the eighth time; CLAT is being conducted since its inception in 2008. CLAT aspirants will be getting ready for taking the coveted law entrance exam which is scheduled for May 11, 2014. Around 35000 aspirants will be taking CLAT 2014. 14 National Law Universities and other Law Schools shall be taking CLAT 2014 scores. For getting admissions in one of these NLUs or a top Law School, you need to be prepared for the exam.

Careers360: With most of the students selecting Engineering, Medical and CA or CS as career path, what made you to take CLAT and pursue a degree in Law?

Akshi Rastogi: I’ll be frank, I had no idea nor wish to go into law, I did not even know about CLAT before I passed class 12th. Back then I wanted to go into engineering and was preparing for that. But as I sat down for the entrance papers I realised that it was not what I wanted to do. Hence even at that stage after I had spent 2 years preparing for engineering exams and was selected into engineering colleges I gave up the field. At that point I was aimless and did not know what I wanted to do, except that engineering was not my goal. After a friend told me about CLAT and law, I decided to give it a try. The subjects and the field was everything that I liked, so I decided on opting for it. Hence began the journey into the field of law.

Careers360:Which other exams did you take? How was your performance in those?

Akshi Rastogi: I took 3 exams, CLAT, AILET and SET. Among these, my SET result was the worst. Though I was selected for interview for both Pune and Noida, it was not up to the mark according to my level of expectations.

Later, the AILET and CLAT results were declared and I got the same Rank 6 in both the exams.

Akshi Rastogi: My basic strategy was to go along with what was taught in class, as it was a new field and something I was not used to, so I took time settling in. Building up on G.K, getting used to new subjects was at first what I concentrated on.

After that it was practising maths, logical reasoning and legal reasoning to increase my speed. Math was a subject I loved, so to mange my time I practiced it again and again. It’s about relative scores in the end.  Moreover I used to read newspapers and novels and everything I could get my hands on. During that time I read everything that I could. Fiction, non-fiction, everything that captured even a bit of interest, that I feel is good to build up on English. A few hours every day were enough in the starting, also I had mock-tests every week and they were a good judge of how my work was and where I need to focus more.

In the last month, I was practicing everything I could get my hands on. In Maths I think I had solved every question I had at least 8-10 times. G.K is a very wide field and I spent some time every-day.

All my focus was on decreasing the time per question. Even during solving the paper it was race against the time. I set goals on solving the paper as quickly as I could. From 45 seconds per question in the middle months, it was deceased to 30 seconds per legal question in the end. In the last month I spent around 10 hours daily on studying. I gave mocks regularly and solved all past papers, CLAT, SET, AILET and the university papers before 2008.

Careers360: Which books did you consult?

Akshi Rastogi: I practiced mostly the past year papers and mock series along with the question materials available with me. Moreover my preparation strategy also included were the notes taken during class.

However additionally I used R.S Aggarwal for initial logical reasoning problems and then a book on Logical reasoning by Arihant Publications. For English my only strategy was to read anything and everything I could get my hands in.

Careers360: What were your weak points and what were the stronger ones? How did you tackle your weakness?

Akshi Rastogi: My strengths were English and Maths. To these I only had to devote time for developing speed and not grasping basic concepts. English again has been a subject which I have been comfortable with and reading has been my favourite hobby and this proved to be an advantage. Reading is one of the easiest ways to build a vocabulary.

Initially in Logical Reasoning portion, I was not comfortable with the critical reasoning part; analytical was fairly easy and posed no challenge. But the questions of critical reasoning proved to be a headache. But then I felt that most of the people struggled with the paragraph questions, for syllogism and other such questions are easy but the inferential and big paragraph ones are the ones which many face a problem with. CLAT I have personally observed is not just about building upon your weaknesses and strengths but also building your own capacity in what others are weak at, it is relative ranking after all. So I made it a point to go to my teachers and practice endlessly such questions and in the end I can firmly say that critical reasoning to this date remains a favourite part of the syllabus for me.

Legal Reasoning was a challenge initially because I had neither familiarity with the kind of questions nor was at ease with them. Time management proved to be an even greater challenge for in the initial mocks I had no time left to attempt all questions as I was taking too much time in legal questions. But as time progressed and I got familiar with certain concepts, my time strategy started working out, and then legal reasoning became an enjoyable section in the paper. I started from 45 seconds per question and took it to 30 seconds or less. The time strategy worked out beautifully in the end and I was fortunately able to attempt the complete paper in time.

I had fairly strong General Knowledge while in middle school but the gap of 2-3 years for me in my senior school with this discipline had me floundering for a base during my preparations. Hence I had to rebuild my habit of reading newspapers regularly and paying attention to the news and also had to build up on my rusty static knowledge. It was a systematic and a meticulously slow process. So G.K. did prove to be a weakness for me with the large syllabus but I followed a very target based approach and limited myself only with the basic questions from previous years.

Careers360:Legal Aptitude is not taught as a subject in undergraduate level, then how did you prepare for the same which is an important part in the entrance tests?

Akshi Rastogi: With legal aptitude, it is a matter of giving some time to this portion and getting familiar with the basic laws and concepts first, applicability in the paper comes up later. Legal aptitude was at first a daunting part of the paper but as time progressed and my time strategy started working out I became fairly comfortable with it. However, building upon Legal knowledge did not happen quickly, it took time, reading up on relevant laws and getting to know about the basic provisions and even getting to know the constitution on great detail had to be done before I felt a semblance of confidence.

Akshi Rastogi: I am not an expert but still there are few general things I’d like to point out as per my experience. Firstly never to get intimidated by the number of hours someone is putting in or when others tell you how much they are studying or how many books someone is referring to. This is an aptitude paper and not a descriptive one, and everyone is different so the amount of hours and books will be different for everyone. As long as you are performing in mock tests and are confident with the way you are preparing, it is all good.

Developing your own strategy is essential. Develop the habit of time management every time you attempt questions of any sort. Keep refining your strategy. Remember to keep revising and consolidating your preparation.

While everything above will definitely help, but this is not some strict code or a guarantee, develop your strategy, study, prepare but do not forget to take proper sleep and do not take too much stress over it. Also, no matter how much you prepare, performing on the exam day is what matters. So if you take too much stress it will only be detrimental. Keeping calm and giving your best is what you can do. I wish that every aspirant does really well.