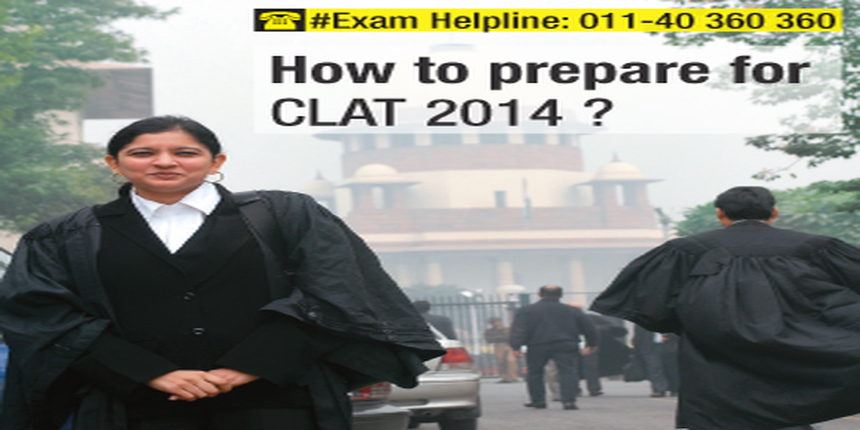 In this series of CLAT 2014 Preparation Tips, Aakanksha Nath from Career Launcher and an alumnus of NLU Jodhpur tells the law aspirants the preparation tips for Common Law Admission Test, lists out important topics from each subject and advises students on how to prepare for subjects like Legal Aptitude which is not taught to students who pass 12th class.

Read this insightful interview below.

1. Less than six months are left for CLAT UG 2014: What should be the preparation strategy and focus areas for the aspirants?

The preparation strategy is different for different students. For students in Class XII, it is advisable that time be devoted to a daily dose of current affairs and legal updates. Get hold of the previous years’ question papers and solve as many papers as one can. Keep reading newspapers and magazines and also work on your vocabulary.

After the boards in March, start preparing in full swing starting with Mock tests.

For those who have taken a break, remain consistent with the way you are preparing. Reading of newspaper/magazines/current affairs is mandatory. Apart from that, work thoroughly on the weak subjects till March. In the last two months, attempt as many mock tests as you can, which are likely to improve your accuracy and speed.

2. What are the key areas/important topics that a student should focus on in each subject area (English, including Reading Comprehension, General Knowledge/Current Affairs, Mathematics, Legal Aptitude, Logical Reasoning)

Practice the basics up to standard 10th (i.e. Elementary Mathematics). (Focus should be on speed building techniques)

3. 0.25 negative marking was introduced last year. What has been the affect of this?

The main aim behind introducing negative marking in CLAT exam was to filter genuine and capable students from the crowd. The idea was to eliminate students who rely on guesswork. The pressure on the students has also increased manifold. Earlier, the focus used to be on one’s reading speed. They are now required to have more accuracy and efficiency.

4. Is there any change expected in the exam pattern of this year’s CLAT 2014?

As per the information available till now, there aren’t any changes in the CLAT exam. The negative marking is there to stay. The weightage of the sections would also remain the same.

5. Which are the books that you highly recommend for the preparation of CLAT 2014?

Now comes the most difficult part, i.e., where to study from? One has to be very careful in choosing one’s reading material. It’s not the number of books you have attempted but the quality of material that you are attempting from. Don’t panic when your peers tell you about a new book launched in the market.

Again, I would stress upon the importance of going through previous years question papers of not just CLAT, but also those of NLSUI, Bangalore.

One can also have a look at “Solutions to CLAT and AILET” by GKP publications, a book that provides detailed solutions and analysis of the previous year’s questions.

For basics, any good book on the subjects would suffice.

6. So far how has been the difficulty level of the exam in the past few years? What is it expected to be like in CLAT 2014?

The difficulty level of CLAT 2013 was moderate. The exam was lengthy as usual but an easy one. Candidates, who would have worked upon their timing and speed, were able to finish it on time. CLAT 2012 was on the difficult side, with questions being asked from static GK which was not mentioned in the notification before.

CLAT has not been a very old examination to determine a pattern. It is still in its initial phase where it is difficult to predict any pattern. So it is the best to be prepared for the unexpected.

7. Apart from the 14 NLUs, which other colleges accept CLAT scores that students should know?

With each passing year, most of the other colleges (apart from the CLAT colleges)  are coming up with their respective entrance exams. But CLAT scores have been accepted by colleges in the past. For example – NLU-Trichy, DSNLU Vishakhapatnam, KLE Law Society etc, UPES Dehradoon accepted the scores of CLAT.

8. How would you advise students to prepare for subjects like Legal Aptitude which is not taught to UG students?

As this section of the exam is completely new for anyone at that age, it is advisable to take a structured guidance. If the candidate has a legal background in the family,  he/she can go for self-study of the subjects with necessary help from the concerned people. Again, one should definitely solve the previous years’ question papers. Most of the students get stuck with the theory part and fail to understand that they need to practice a lot after finishing their theory part. Take any good book and practice. There is no substitute for practice, especially for Legal Aptitude.

This forms the main portion of the exam because the tie-breaker marks are also decided on this portion. Moreover, as you would be pursuing a career in law, it is advisable that you get your basics correct.

9. Which topics would you advise non-math students to prepare for and what should be their overall preparation strategy for mathematics?

The fear of Math has not been a story unheard for those coming from non-math background. But the good news is that the level of math asked in this exam is that of class 10th. The questions asked do not pertain to any fixed formula based strategy of any complex calculations. It is advised that the candidates should practice the math portion of the previous CLAT papers in order to get an idea of the level of questions.

10 What are the other major important undergraduate law exams that you would advise students to take up?

A few other law undergraduate exams that the students should not miss out on are:

A majority of students take engineering or medicine as their future career path. Law is less popular among students. We would like to know the career prospects for those who wish to take up law.

A major concern and deterring factor for people from taking up law as a career option has been its future prospects. However, with the changing times, the options have opened up for lawyers manifold. The profession is not limited anymore to black robes and white collars. A few options which can be considered are as follows:

CLAT exam is the entrance examination for admission to both Bachelor and Masters Law programmes. For CLAT UG, you need to have atleast completed your 12th. Now there are also 5 year Integrated Law Courses under CLAT UG and there is no upper age limit for this, But for CLAT PG, you need to have a relevant Bachelor's degree. So in order to study LLM under CLAT PG, you should be a LLB graduate. Now you haven't mentioned your Graduation stream. If it is a non Law course you can appear for CLAT UG and if it is a Law Course, you need to complete your Graduation and then appear for CLAT PG.