How to prepare for CLAT 2019 Current Affairs section by Harsh Gagrani - Due to the intimidating technicalities involved in sections like logical reasoning, legal aptitude, Math, and so on, the current affairs section often tends to take a backseat during CLAT preparations. But, according to the law expert, Harsh Gagrani, this section does not require only forty minutes of attention a day, but candidates should invest at least an hour per day to prepare for this section. A wise strategy, continuous revision, and prudent selection of study material are the key characteristics of a good CLAT current affairs preparation. 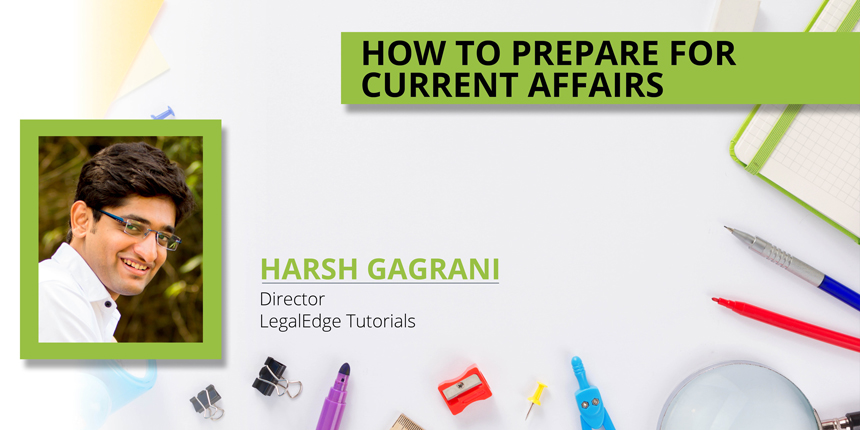 In another advisory by Careers360 on how to prepare for CLAT 2019 current affairs section, Harsh Gagrani, Director of LegalEdge Tutorials, shares his tried and tested tips on how to ace this section. Read further to know CLAT current affairs preparation tips from the expert himself and incorporate them in your CLAT study routine.

In Current Affairs, some topics have traditionally appeared more frequently than others. These areas are Appointments, Awards, Sports, Days and Dates and Legal GK, than Controversies, Removals, MoUs etc. Thus, a student should study these topics thoroughly to prepare for CLAT 2019 current affairs section. However, this is merely as per the trend of previous years’, which might change this year. Therefore, candidates should not completely ignore the latter topics but go in-depth of the former topics.

Current Affairs, a seemingly harmless section, can create a havoc for candidates if some basic rules are not followed while practicing the mock tests and attempting the paper, which include:

Mastering Current Affairs is about expanding the knowledge base not in whichever way possible but in a carefully methodical way. The Internet ecosystem is full of free Current Affairs resources, including Videos, Articles, News feeds, Questions etc. If a student doesn’t restrict himself/herself while preparing for CLAT current affairs section, he might soon find himself going through multiple sources daily in quest of new information, but without adding anything to his scores kitty.

The last week before CLAT, would be the most crucial, especially for General Knowledge section. Since CLAT current affairs is a memory-based section, a lot of hard work can go down the drain if a proper revision strategy is not followed. Following are a few strategies which candidates can follow while revising for CLAT 2019 current affairs.

With perseverance and dedication, cracking CLAT 2019 becomes a reality!

Common Law Admission Test will be conducted by CLAT consortium of NLUs headed by NLU, Odisha, Cuttack, this year. The entrance test serves to be a gateway for law aspirants to secure a seat in 21 participating institutes for UG and PG law programmes. CLAT 2019 will be held on May 12, 2019.