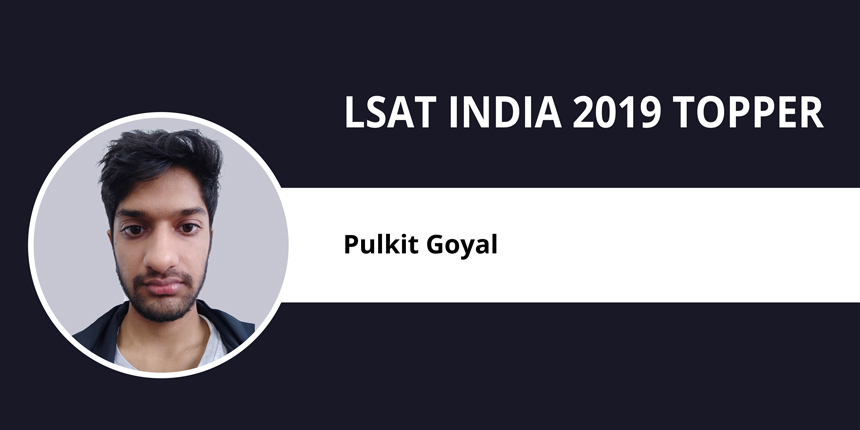 Careers360: Congratulations Pulkit! How are you feeling?

Careers360: How did you celebrate your success?

Pulkit Goyal: After my boards, my friends and I had planned a trip to Himachal Pradesh. The result of LSAT India was announced just a day before I left. So the trip became a celebration!

Careers360: Can you tell us a little bit about your family and background?

Pulkit Goyal: I live in a joint family. My father is a businessman and my mother is a soft skill trainer. I have completed my schooling from Amity International School, Gurugram, and was a science student till class XII. I got a 97.4% in my class XII boards.

Careers360: What motivated you to take up a career in law?

Pulkit Goyal: It is a funny story. I was all set to go abroad and study data sciences. I had also applied to a few universities. One fine day, I was in a coffee shop with my friends when one of them asked me “Do you see yourself doing this for the rest of your life?”. This question made me think, and I looked back at the last two years of my life. I realized that for the past two years I had been deviating from science and was doing a lot of research. I was actively participating in my school’s debating society. I realized that I enjoyed studying science but I cannot work in the field of science. Then I looked at the other career options after I gave my boards. Law includes a lot of research and debating, both these being my major interests, it seemed like an obvious option.

Careers360: Did you take any coaching for LSAT India?

Pulkit Goyal: Yes, after my boards I joined a crash course with Aptitude for Law coaching.

Careers360: Apart from LSAT India which other law entrance examinations have you taken this year? How was your performance in them?

Careers360: So, which is your dream college?

Pulkit Goyal: Dream college would be Yale Law, but that is for post-graduation. For now, I am going to attend the Jindal Global Law School, Sonipat.

Careers360: Was this your first attempt at LSAT India?

Pulkit Goyal: Yes, this was my first attempt.

Careers360: How did you balance your boards and the law entrance preparation?

Pulkit Goyal: I decided to prepare for the law entrance examinations after my boards, so there wasn't any balancing needed!

Careers360: LSAT India is not like the other law entrance examinations in India. So, how did you prepare for LSAT India?

Pulkit Goyal: LSAT India is not an exam which requires a lot of hours. All it requires is an aptitude. CLAT and AILET are more about how hard your work to prepare for these exams because they have sections like current affairs, legal knowledge, etc. And there are random facts that you have to memorize. So a lot of prior knowledge is required to be able to attempt these examinations. Compared to that, LSAT India does not require a lot of prior knowledge. So most of the questions are argumentative in nature, they give you an argument followed with a conclusion and you are supposed to give extra premises which either weaken or strengthen the argument. I used to debate a lot and I also had a healthy reading habit, so that helped. LSAT India has a lot of reading, it's all reading honestly. There are free LSAT mock tests which LSAT India provides. I also referred to the material given to me by my coaching.

Careers360: How important do you think coaching is for LSAT India?

Pulkit Goyal: I have a friend who did not take coaching and scored a 96 percentile. So, I won’t say that coaching makes a huge impact, it's all about how motivated you are. But if you have nice coaching or you have good mentors who are willing to explain things to you, it does help. A lot of times, it becomes difficult to analyze your weaknesses and how to correct them. Also, there might be some questions in LSAT India mock tests which you just don’t understand and try to solve the same for 12 hours! So it's nice to have someone explain it to you.

Careers360: What books would you suggest for LSAT India?

Pulkit Goyal: I mainly solved the free mock tests that are available for LSAT India. I also referred to the content my coaching had provided me.

Careers360: What was your exam day strategy for LSAT India?

Pulkit Goyal: Compared to the other law entrance examinations where you have a fixed amount of time and four sections, and you are free to distribute time, LSAT India does not have that. You are given 35 minutes for each section. So you can’t have a strategy where you can prioritize a section or you can divide your time! So my only strategy was that after attempting a question, I did not think more about it. I did not entertain second thoughts about an answer, because once you start doing that, the questions stuck in the back of your head and it stops you from attempting the rest of the examination. The other thing that helped me was that if a question was taking up a lot of my time, I would solve the next four questions first and come back to this one after that. Unlike other entrance examinations, LSAT India does not have a negative marking system. So there is no point in leaving any question, but try not to waste too much time on a question.

Careers360: According to you, which section did you find the most difficult and which was the easiest?

Pulkit Goyal: For me, the analytical section was a breeze for me. Initially, I found this section difficult due to the paneling questions, but my coaching helped me with this portion. The most difficult was the English section, because of the reading comprehension. This section has big passages followed by 5-6 questions. You find yourself re-reading the entire passage again and again. They don’t ask you direct questions, they will give you an analogy and ask you ‘which of the following closely resembles the above argument’. They are way more analytical and comprehensive in that aspect, thus making them difficult.

Careers360: What is your advice to the future LSAT India aspirants?

Pulkit Goyal: Never be scared of the competition because once you start giving the mock tests, you will start realizing that the competition is always between the top 10 percent. There is no point in looking at the number of aspirants giving the exam and getting scared.

Also, while preparing for LSAT India and while solving practice questions, if you get a question wrong, always revisit it. Try to find out what went wrong and correct it. Ask for help if you don’t understand it. Even if you do not go to coaching, you can ask one of the teachers to help you. The mentors are very friendly and will definitely help you out. These are a few pointers which I believe can help everyone.

LSAT India 2020 has a new website - DiscoverLaw.in, which contains all updates on the exam and al...

No, you are not eligible for LSAT exam if you belongs to general. The minimum percentage is 45. But If you belongs to reserved category then there is some relaxation in marks.

For more details about LSAT India:-

I hope this helpful for you.

what is the price of SLAT application form?

Hi Hope you are doing great! Well symbiosis law admission test has released application form on Jan 22nd and it is till 16 April 2020. The application fee for SLAT Exam 2020 is Rs.1750 and candidate also needs to fill Rs.1000 more for the program selection. The total application fees are Rs.2750

you may refer to link below for further information